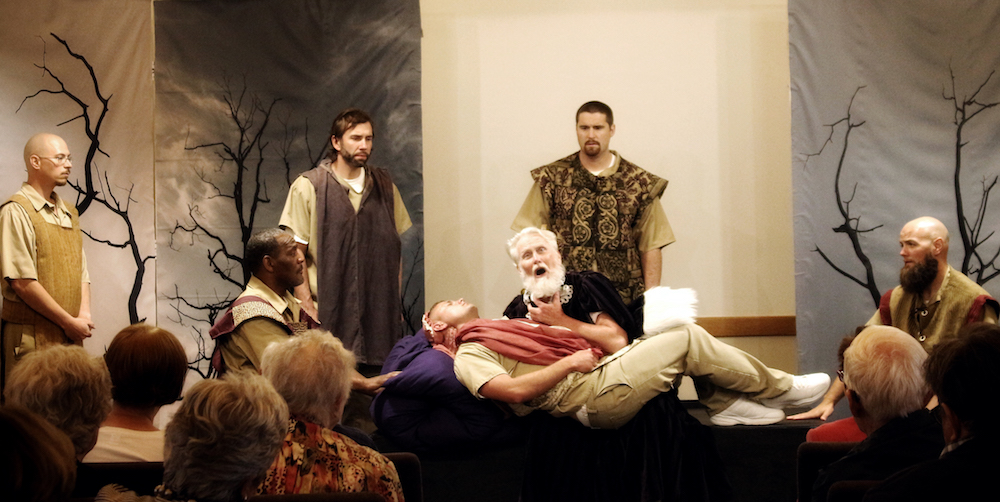 I’ve seen a lot of Lears — including Lee J. Cobb at Lincoln Center a half-century ago. Last week, I saw another Cobb in the role. Hal Cobb is serving a life sentence at the Luther Luckett Correctional Complex. His performance in the Shakespeare Behind Bars production was as urgent, mercurial and psychologically insightful as any I’ve ever seen.

Even great actors sink under the weight of this great character, but Hal Cobb brought all of Lear’s petulance and terror to the surface and perfectly expressed the pain and tragedy of his Lear’s physical and emotional decay.

“King Lear” is a dark exploration of a failed family and the terrors that ensue when moral codes and misplaced loyalties collide, and this cast brought it to life with emotionally rich performances led by directors/facilitators Matt Wallace, Keith McGill and Brian Hinds.

As Lear’s daughters, John Sheesley (Goneril), Blake Walker (Regan) and Andrew Noe (Cordelia) offered well-shaded portraits of darkness and light. And though it’s the three sisters who shape much of this play, their husbands, Joel Otis (Duke of Albany), Robert Divine (Duke of Cornwall) and Michael Webb (King of France) are nevertheless potent figures.

Timothy Falk as The Fool and Samuel Barrett as Kent were compelling forces whose strategies for balancing fealty to both the truth and leader gone awry are so powerful in this play.

The parallel tale of another dysfunctional family with sibling issues — the Earl of Gloucester and his legitimate and illegitimate sons Edgar and Edmund was played with wit, vigor and pathos by, respectively, Jerry Guenthner, James Prichard and Thomas Walker.

There is not a single role in this play that is not implicated by the moral urgency of this story and in the intimate Luther Luckett Chapel, where these performances are staged. Every performance seems immediate and vivid. Excellent performances were delivered by Chad Meadows (Oswald), Michael Malavenda (Duke of Burgundy), Trevor Johnson (Curan), Charles Young (Gentleman), Talik Fitzgerald (Knight) and Michael Bolton (Herald), Solomon Evans and Roderick Blincoe (Attendants). Sets by Glenn Guntle and music by Thomas Suleski shaped the production. And an energetic opening performance was given by new members of the SBB “Journeymen” program Kyle Sturgeon, William (O.B.) Johnson, Alex Sears and Sharriff Moore.

Apart from the impressive theatrical achievements of this company, the rehabilitative and therapeutic impact of Shakespeare Behind Bars is indisputable. In Kentucky, the three-year recidivism rate for state prison inmates is 43%. Over the last 24 years, the recidivism rate for SBB participants has been 6%. For information: shakespearebehindbars.org.

Jack Wann directs the Shelby County Community Theatre production of Patrick Hamilton’s 1938 play “Gaslight” (aka “Angel Street”), a psychological thriller about a villain (David Cook) who methodically schemes to make his wife (Candy Thomas) think she’s going insane. Wann also happens to be the drama teacher who took my high school class to New York to see Lear in the ‘60s. After a long career that took him to other parts of country, in recent years he’s been making great theater in Shelby County. This production of an old potboiler is an example.

These days, the word “gaslighting” is often applied to psychological manipulation in political contexts. But in this play, it illuminates an especially chilling brand of domestic abuse that feels authentic and pervasive. In the household, there are two servants (vividly played by Emily Kees and Cheryl Rankin Van Stockum). When a policeman (Reggie Van Stockum) intrudes on the husband’s scheme, he brings a bright light to bear.

‘Laundry and Bourbon’ and ‘Lone Star’

I was floored by the poetic language, raucous humor, poignant emotional depth and bravura performances in The Bard’s Town Theatre’s paired one-act plays by James McClure: “Laundry and Bourbon” and “Lone Star.”

Directed by Sabrina Spalding, the production offers two slices of life in small town Texas. In the first, three women (Tessa McShane, Megan Adair and Amy Davis) come together around folding laundry, bourbon, gossip and clashes that date back to high school. In the second, three men come together (Corey Music, Lee Stein and Tony Smith). These six, richly developed characters are bound together by the fraught connections of small-town life. Though you will laugh throughout, McLure’s seriousness of purpose calls for nimble, virtuoso ensemble acting. It gets that here. Also, there is much discussion of a pink 1959 Thunderbird. You don’t want to miss this.

Fans of the cult classic “Monty Python and the Holy Grail” can find almost all of their favorite quotes still here, in the musical adaptation “Spamalot” — with book and lyrics by Eric Idol himself. Witches still must be tried to see if they weigh the same as a duck. The Black Knight still tries to fight after losing all his limbs. If anything, some of the best bits have been extended to fit the new medium. Dennis the peasant is still there but is transformed into Sir Galahad (Phil Buckley) by the Lady of the Lake (Bridget Thomas), a delightful diva who makes a welcome addition. And the collector calling “Bring out your dead?” Well, that turns out to be brave, brave Sir Robin himself (Russell Cooper). Instead of a throwaway joke about whether or not Lancelot (David Galloway) might be gay, there’s an entire song in which he explores and comes to terms with his sexuality.

Some of the jokes — such as the perplexing message on a cave wall “Covfefe” — have clearly been added. There are even a few purely local jokes, poking fun at the Derby outcome this year. But these new bits feel perfectly in line with Monty Python: witty, irreverent and earnestly delivered, sure to get a laugh along with that sympathetic groan. —Alex Roma •