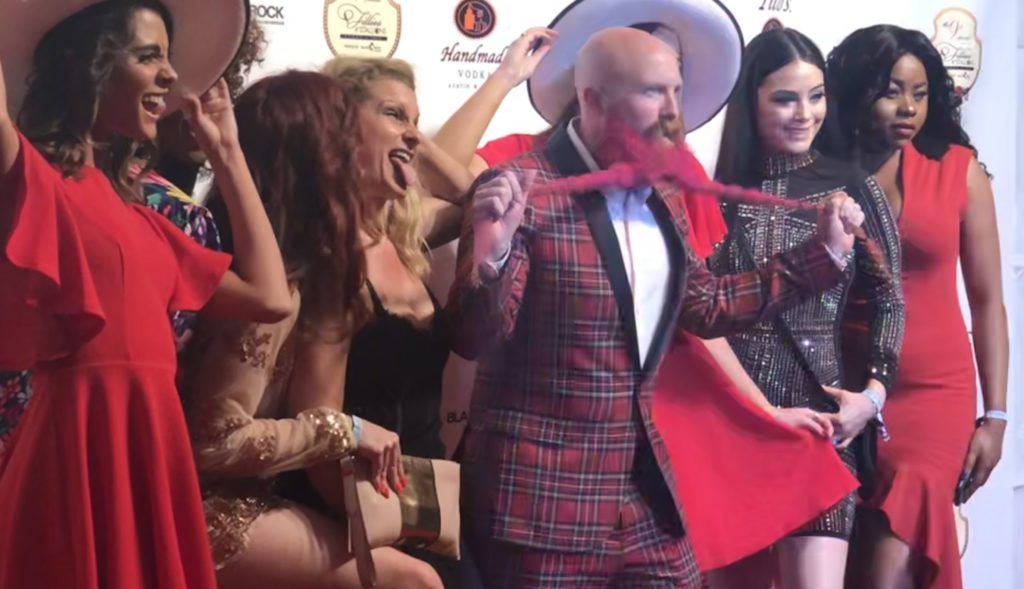 My editor flipped an email over to my inbox from a Los Angeles-based communications company inviting me to attend and cover the Fillies & Stallions party hosted by Black Rock Thoroughbreds at the Mellwood Art Center.

Last year, I was invited by local marketing group King Sixteen to cover the Esquire Magazine party at Rabbit Hole. I brought a friend and reveled in the beauty of the space, the details that went into the ambiance including ice sculptures and herbs clipped fresh and dropped into your cocktail. With this in mind, I agreed to attend the Fillies & Stallions party, since it’s hyped as the Derby party to go to and is “invite only.” Its press release promised a star-studded affair and name dropped all your early-aughts faves as past attendees, such as Jessica Simpson’s ex-hubby Nick Lachey and Ashton Kutcher. My sister was excited to tag along.

The party is invite only. Basically, you go to its website and fill out an application to attend. I’d seen online that tickets were going anywhere from $650 to $1,000. My sis has a friend who does party-promotion-girl-type work, and she’d been told that if she posted about the party online, then she could attend for free, but she never got around to it. The economics for the party seems to work like Vegas rules: Pretty girls party for free, and dudes pay a lot to party with them. A NuLu proprietor told me at the party he and his friends pulled up in a Bentley and still had to drop $1,500 to get in. “It’s expensive being a guy. That’s just how it is,” he said. At 34, I feel like I’ve aged out of the demo of women using their looks to get behind the velvet rope. But it was a currency I was rich in throughout my 20s and thrilled in spending. Luckily, for this party I’d have a press pass and wouldn’t need to rely on my beauty or my bank account to get in.

Press was instructed to arrive at 9:45 p.m., so that’s what I did. When we walked up to what looked like the entrance, a man immediately stopped and asked who we were. I announced myself as press and my sister as my plus-one. He said, “I didn’t realize we were giving media plus-ones.” The way he looked at me was how the dressing room mirrors at Target with their terrible lighting make me feel. Inadequate. This was not a feeling I expected to feel on what I assumed would be a fun night out. I spent most of my 20s in SoCal. Then, there was a certain high in a bouncer or party promoter casting this same look at me and my girls and waving us in for free, or plucking us out of a long line and escorting us to VIP, us wobbling in our heels and jerking our tiny dresses down every few steps. We did this for countless nights. Until it got stale. Until the interiors of the clubs all began to look the same. Until it became more important to hear what your friends had to say when you were out with them, than it was to be seen out on the scene. And it’s a song and dance (to a techno beat) that I haven’t missed since moving back to Louisville.

We aren’t Vegas. We aren’t LA. We aren’t NYC. We aren’t Miami. We’re warm, welcoming and quick to smile at a stranger. We’re a humble city. We’re a city known for our hospitality. And this is the time of year that that hospitality is most important. But that wasn’t the vibe at the Fillies & Stallion party.

A woman walked over. She happened to be the person who emailed me, and I explained, I expressly stated in my email I was going bring someone – who wants to party alone on Derby… Errr… Oaks? No one responded to say it’d be an issue. They decided that my sister would be allowed in as well. We were led over to the red carpet. I was given a list of celebrities who were to be in attendance — mostly football players — and then told it was likely no one would arrive until after 11 p.m.. So, we were basically expected to stand there and wait until then. This was nothing like the party I attended last year, where I was free to roam and take part in the festivities. I looked at my sister, feeling sorry they’d let her in after all. But she was a good sport and played photog for me.

They opened the red carpet for anyone attending the party to strut down and pose with two models in red dresses and white Derby hats. There were some beauty pageant queens — local and international — but the only celeb who walked by in two hours was Von Miller of the Denver Broncos. I admired his deep green suit and then remembered I was working the red carpet as a reporter and should probably ask him a question, but before I could think of one, he was on his way. Different groups of young women shoved their smartphones into my hand and asked me to take their photos. They slung their arms around their girls, flipped their hair and angled their arms and legs just so for the photos. I let one girl know she had her friend’s lipstick on her cheek, she sloshed her drink a little and tipped toward me, uttering, “Lick it off, baby! Lick it off.” I passed. Her friend complied. The girls were glittery, spangled and glorious. Fake tanned, spray tanned and Spanxed. My heart softened for them. This was their night and I hoped each one made it home safe in the morning.

An older black man was taking a photo of a woman I assumed was his wife. I gestured for him to go stand on the red carpet beside her, so I could get a pic of them as a couple. Later, he thanked me and whispered that he was in town, working for Steve Harvey. He didn’t want to the professional photogs at the other end of the red carpet to take his pic because he was keeping a low-profile. Harvey was hosting a different party at the other end of town. This man was here and not there. Before bed that night, I checked Facebook. I had several friends at that party, the Trifecta Celebrity Gala at the KFC Yum! Center. Steve Harvey, terrible suits and mustaches aside, it looked like a good time. Usher performed. I checked out its website. It was more stylish than the Fillies & Stallion site. The gala is generously presented by Junior Bridgeman and his family. Tickets for that event was also listed as a $1,000 and benefited the Victory Over Cancer Foundation, West End School and UofL Austim Center. From what I could tell, anyone is welcome to purchase a ticket and attend. I wondered if the man and I were both at the wrong party.

By midnight my sister and I were ready to leave and completely over just standing around waiting for something interesting to happen. I did a quick lap of the actual party. It was setup with all the bottle service tables in a big square kind of like the old O’Malley’s Corner (no revolving dance floor) and the warm-up DJ was doing a set that could have easily been mistaken for a “Now That’s What I Call Music” mix. I decided to call it, and my sis called us a Lyft. As we walked out, I took my media pass from around my neck and handed it to the first official person I saw. The look the guy from earlier gave me had been right after all — we didn’t belong there. So, we headed off into the night toward the places we did.