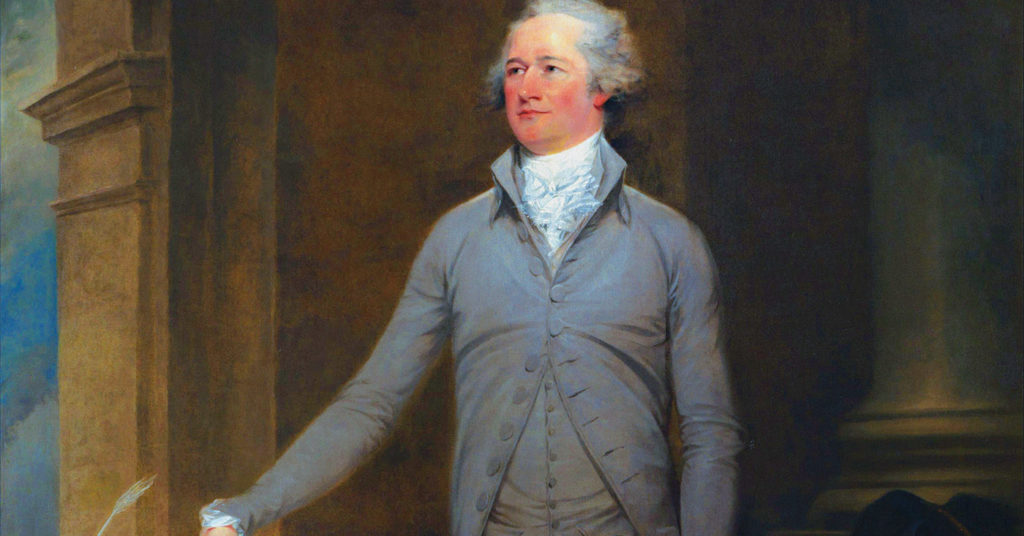 Does it really matter whether or not “Hamilton: An American Musical” is good history? Does it actually matter if “Hamilton” gets things right?

This is a Broadway theater show featuring singing and dancing Founding Fathers, after all. On the face of it, there’s something clearly absurd about interrogating it for accuracy — as if it were a Ken Burns documentary or a high school history textbook. “Hamilton” is clearly commercial entertainment, and no one goes to the “Spongebob Squarepants” musical expecting Spongebob, Squidward and the gang to get marine biology right. Surely, getting it right is not a Broadway musical’s job. Surely, it’s enough if “Hamilton” gets audiences excited about the real history around which the show revolves. People who see it onstage can then go find a history book to learn more; kids can just go ask their teachers. Shouldn’t professional historians like me be satisfied with that?

As I’ll explain in a talk at Locust Grove next week, it matters a great deal whether this blockbuster Broadway musical is good public history. And I know Lin-Manuel Miranda, “Hamilton”’s absurdly talented composer, lyricist and librettist thinks so, too. “I want historians to take this seriously,” he told Ron Chernow, when he hired him to be the show’s historical consultant.

Miranda certainly took his own job seriously, doing plenty of research in the real Alexander Hamilton’s personal papers, reading lots of history books about the period, and consulting with experts such as Chernow, on whose book the musical is based.

Miranda certainly hoped that the show would be good history, and that’s a wonderful thing, because, by now, an awful lot of people have seen it. Three and a half million people will see it this year alone — in productions in New York, London, Chicago and in the two U.S. tours (performances in Louisville begin June 4). By every measure, “Hamilton” has achieved much greater penetration, reach and impact than 1,000 historians’ books or articles about the American Revolution or the early republic. The show’s messages about those historical events are being consumed every night, everywhere.

So is it good history?

Consider first, all the things, large and small, that this show gets right about Alexander Hamilton’s life, the American Revolution and the nation’s early history.

Hamilton really did destroy Samuel Seabury’s arguments — though he did so in print, not in person.

He and Hercules Mulligan really did go on canon-stealing adventures together.

Better still, the show tells audiences much more important things about the past that most of us probably didn’t already know — such as the form and function of dueling rituals and how voting in presidential elections worked before the 12th Amendment. It tackles George Washington’s problems finding good lieutenants, the role of the French alliance in the war and the existential struggles to build a new system of government — “What comes next” King George pointedly asks after the patriots’ victory at Yorktown.

Remarkably, this great musical tells us what came next. It covers the creation of a national bank, the enigmatic deal over dinner that saw the nation’s capital relocated to the Potomac, Washington’s 1793 Neutrality Proclamation and the descent into party politics after Washington’s retirement from the presidency.

In fact, the show gets the viciousness of national politics at the turn of the century just right. In these scenes, the Founding Fathers are not marble statues but a scrum of self-aggrandizing politicians jockeying for power. Madison schemes, Jefferson preens, Burr is ingratiating, and Alexander Hamilton is relentlessly self-promoting and self-obsessed. All of this is right on the mark, and if you knew nothing about any of this before you saw the show, you could do a lot worse than use “Hamilton” as your primer.

Still, “Hamilton” is not perfect (a fact that the new Hamilton exhibition that just opened in Chicago takes pains to point out), and the show’s depictions of the American Revolution, of slavery and antislavery and of several other big topics have been challenged by dozens of scholars and critics.

Immigrants. We get the job done!

Take immigration. As an immigrant (from Britain, of all places) and now a proud U.S. citizen myself, this is hands-down my favorite line. In the show, that line is tied to a host of other lines, all of them propping up a central narrative portraying Alexander Hamilton — “the ten-dollar founding father without a father” — as an up-by-his-bootstraps striver, an immigrant who “got a lot farther by working a lot harder, by being a lot smarter, by being a self-starter.” Alexander Hamilton, Miranda tells us, made his own destiny, going from poverty in the Caribbean to the height of President George Washington’s Administration. He wrote his way out. “How to account for his rise to the top?” Burr asks. “Man, the man is nonstop” comes his answer.

The idea of quick and easy upward social mobility is at the root of our national myth-making. It even has a name: the American Dream. America, we tell ourselves all the time, is “a place of opportunity, where no matter how humble our origins, we can make it if we try.” Michelle Obama said these exact words when she introduced this show at the 2016 Tony Awards, and because she was sitting next to Barack Obama, the nation’s first black president, you can forgive her for believing the truth of what she was saying.

Still, most historians are troubled by this sort of frictionless portrayal of the ease with which a person on the bottom rose to become a person on the top. Upward mobility in the 18th century, and upward mobility now, is far rarer and more difficult than Alexander Hamilton and Barack Obama make it look. The musical ignores the hard and high structural obstacles that have long blocked poor people (and people of color especially) from achieving the American Dream.

Historians also flinch at the portrayal of Alexander Hamilton as a hero to immigrants everywhere. The real Hamilton actually spent much of his political life working against the interests of other up-from-the-bottom strivers. Despite his humble origins, Hamilton grew up to be an unapologetic elitist, more than happy for the new nation to be controlled by the country’s one percent — its merchants, landowners, bankers and lawyers. Here’s Hamilton at the 1787 Constitutional Convention justifying his belief that working-class men — people he regarded as ignorant and lazy — be excluded from government: “All communities divide themselves into the few and the many,” he said. “The first are the rich and well born, the other the mass of the people. The voice of the people has been said to be the voice of God; [but] however generally this maxim has been quoted and believed, it is not true in fact. The people are turbulent and changing; they seldom judge or determine right. Give therefore to the first class a distinct, permanent share in the government.”

Hamilton’s famous financial plan betrayed the same clear elitism. It built a national bank that concentrated wealth and delivered huge windfalls to rich investors who had bought IOUs originally given to war veterans in lieu of wages. And whenever working people complained about getting the short end of the stick, Hamilton came down on them hard. In 1794 he advised President George Washington to send out the army to suppress a protest by farmers in western Pennsylvania who were angry over a new federal tax on whiskey. This episode was part of the musical back when it was still being performed off-Broadway, but Miranda cut it out as he retooled the show for mainstream audiences.

The real Alexander Hamilton was actually no fan of other immigrants — a fact that was well known during his own lifetime. In 1798, Hamilton publicly endorsed the Alien and Sedition Acts, a flagrant attempt by President John Adams to silence political dissenters, especially Irish immigrant newcomers, by censoring them, blocking their path to citizenship, and even deporting them when they failed to pledge loyalty to him.

This is ugly stuff, and it doesn’t fit neatly into the juggernaut musical that is breaking box office records across the country. But it’s the truth — the messy, contradictory, unsettling truth. “History obliterates / In every picture it paints,” Aaron Burr sings toward the end of this fascinating, frustrating, firecracker of a show. It shouldn’t surprise us that Broadway does too. •

Richard Bell teaches history at the University of Maryland. His talk about “Hamilton” and American history takes place at Locust Grove (locustgrove.org) on Thursday, June 6 at 6.30 p.m. For tickets call 897-9845.

‘Hamilton’-themed events at Locust Grove include:

Hamilton Festival, at 10 a.m. Sunday, June 16, featuring student performances of original pieces, a recreation of the Hamilton-Burr Duel, a sing-a-long and presentation on clothing of the period, Aaron Burr’s time in Louisville, and more.

Another chance to get ‘Hamilton’ tickets!

Didn’t get your “Hamilton” tix? There is still hope.

A digital lottery for tickets might mean you get a seat for just $10!

Also, a pro tip: Visit kentuckycenter.org or the Kentucky Center Box Office for late release tickets, which may become available.

The lottery will take place in conjunction with the show’s first performance, June 4, at The Kentucky Center. Forty tickets will be sold for every performance for $10 each. The lottery open at 11 a.m. Sunday, June 2 for tickets to the June 4 performance. Digital lotteries for each show will begin two days prior to each performance.

Here is how to do it:

You must be 18 or older and have a valid, non-expired photo ID that matches the name used to enter. Tickets are non-transferable. Ticket limits and prices displayed are at the sole discretion of the show and are subject to change without notice.

Lottery prices are not valid on prior purchases. Lottery ticket offers cannot be combined with any other offers or promotions. All sales final — no refunds or exchanges. The lottery may be revoked or modified at any time without notice.