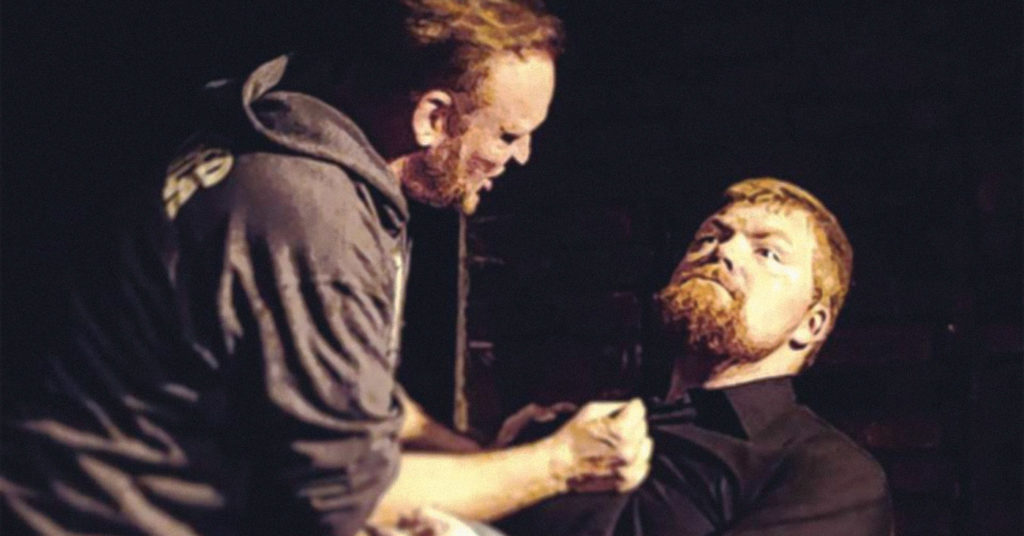 Saturday, May 4, isn’t just the day of the Kentucky Derby. It’s also “Star Wars Day” (may the “fourth” be with you — get it?). Stefan Gearhart and Brad McQueary, who perform as Sidetracked Improv, have merged the two into one show, “Darth Derby.” So, when the sun goes down on your Derby day, after you’ve won or lost all of your money and are reeling from a bellyful of mint juleps, head down to The Bard’s Town and catch this one-of-a-kind, mash-up improv show. Gearhart took time to chat with us about “Star Wars,” horse racing and how they match up.

LEO: With a themed show like this, do you feel obligated to get back to the theme if your scene wanders off topic a little?

Stefan Gearhart: Basically, what we do is theme the suggestions. We might ask, ‘Give me a weird job someone might have on the Death Star.’ So, the scene might be two janitors who happen to work on the Death Star pontificating about life, or how the emperor is a bad boss or the occupational hazards of cleaning up after Stormtroopers when they have a drunken night.

Is there something Derby and ‘Star Wars’ have in common?

I don’t know. It’s weird. This is the biggest event of the year for this state, where people get drunk and bet on horse races. And yet most of the state thinks betting and alcohol are evil. But I feel like falling to the dark side is kind of like selling your soul to the devil. So, when it comes to money this weekend, a lot of people would fall to the dark side if it meant their horse will come in.

Who in the ‘Star Wars’ lore would make the best jockey?

Probably Padme, Queen Amidala. She’s probably the smallest. It would have to be her or an Ewok, I feel like. Yoda is too small, way too small. His little green feet wouldn’t even reach the stirrups. At the same time, Luke and Leia rode those speeders really well in ‘Return of the Jedi,’ so it could be either of them, too.

What are your earliest memories of both the Derby and ‘Star Wars.’

I’m old enough that the second movie I ever saw in theaters was ‘Return of the Jedi.’ I was already indoctrinated. I was blonde-haired and blue-eyed, and every time I went to the barber I made him cut my hair like Luke’s. Then, we moved to Louisville when I was 14 years old. I feel like everyone’s first year in Louisville you have to do the Derby. So, my dad and my stepmom at the time got all dressed up, made me dress up, made my sister dress up and do the whole hat thing. It was so weird to me, I was wearing a suit and it wasn’t even Easter. So, we all went out to eat, then they dropped my sister and I off at my grandparents, and they went to Derby by themselves. [Laughs.] It’s OK, though, a fun fact is, I didn’t want to go anyway because I’m terrified of horses.

Who in the ‘Star Wars’ universe can drink the most mint juleps?

The Max Rebo Band from Jabba’s place in ‘Return of the Jedi.’ They have those long noses and such, they can probably suck drinks down real quick. Plus, they’re musicians — they know how to party.

Is there any chance you will be wearing the slave Leia costume Saturday night?

Unfortunately not. I had to retire it last year. I got weight loss surgery. Now, my boobs won’t fill it out anymore. I just don’t have the curves that I used to.