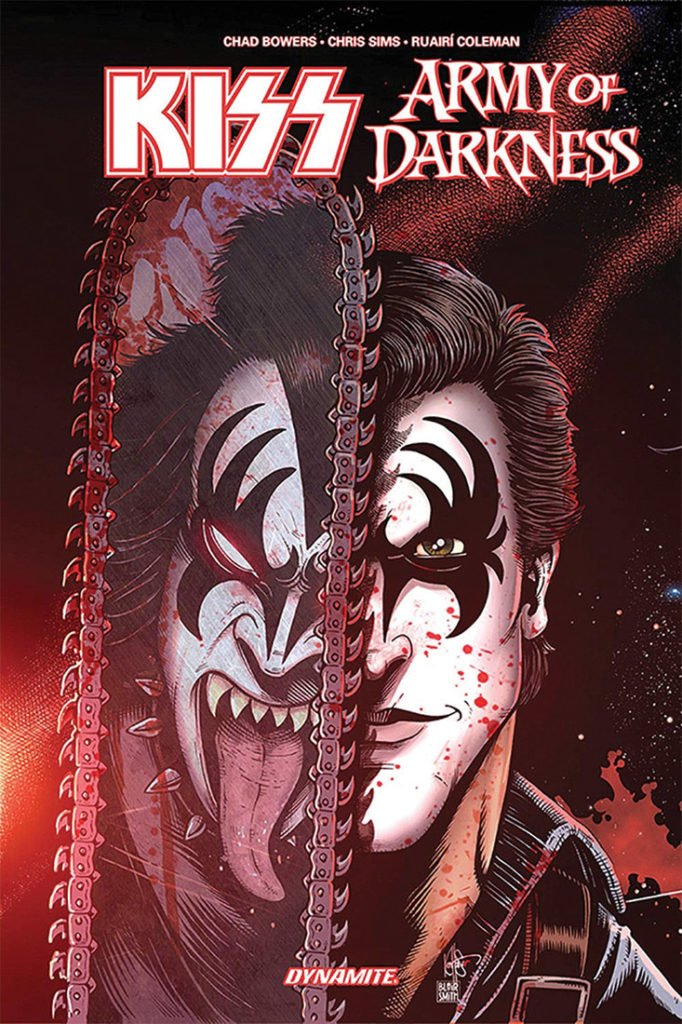 When I first saw “Army of Darkness” as a teenager, I thought, “I loved that, but I wish it had more of my dad’s favorite band KISS in it.” With a brand new trade paperback of the five-issue crossover from Dynamite, “KISS/Army of Darkness” has made my dream come true.

We are introduced to a world where the band members of KISS all have superpowers granted to them by The Destroyer, and “Evil Dead” protagonist Ash Williams is a self-professed, lyric-spouting member of the KISS Army. Our heroes are sucked 700 years back in time by the Necronomicon, where they are pursued by a demonic sect of Destroyer users led by Mr. Blackwell (there are lots more KISS references where that came from). With the timeline thrown off course, and the past under evil Deadite rule, it’s up to Ash and his new friends to save the village, win the girl, and get back in time to rock.

Savvy KISStorians will be sure to pick up on lots of cheeky references, while “Evil Dead” fans will finally have the opportunity to see Ash sport his own signature KISS makeup and refer to his infamous weapon of choice as his LOVE GUN. “KISS/Army of Darkness” is a bloody, breezy read that Army Members and Dead(ite)-heads will eat up. Definitely the coolest KISS crossover since that time they met “Scooby-Doo.” Keep your eyes peeled for a cool Kentucky setting. 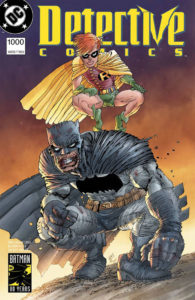 “Detective Comics” No. 1,000 hit the stands this month, celebrating 80 years of Batman. This is not the Adam West, campy Batman from the TV show, but the Dark Knight who strikes fear into the hearts of bad guys in Gotham City.

DC Comics derived its name from this title, which started in 1937, with stories about cops and robbers and high adventure. Batman made his first appearance in No. 27 in May 1939 in what would become one of the most valuable comics in history, selling at times for over a $1 million.

Issue No. 1,000 is full of the kinds of stories we expect from the Dark Knight, with all the villains present and accounted for.

It has some of the biggest creators and artists in comics today, including the regular team of Peter J. Tomasi and Doug Mahnke as well as names like Neal Adams, Denny O’Neil, Scott Snyder and Kevin Smith. There are different covers as well, with artists Bernie Wrightson, Jim Lee, Jim Steranko and others.