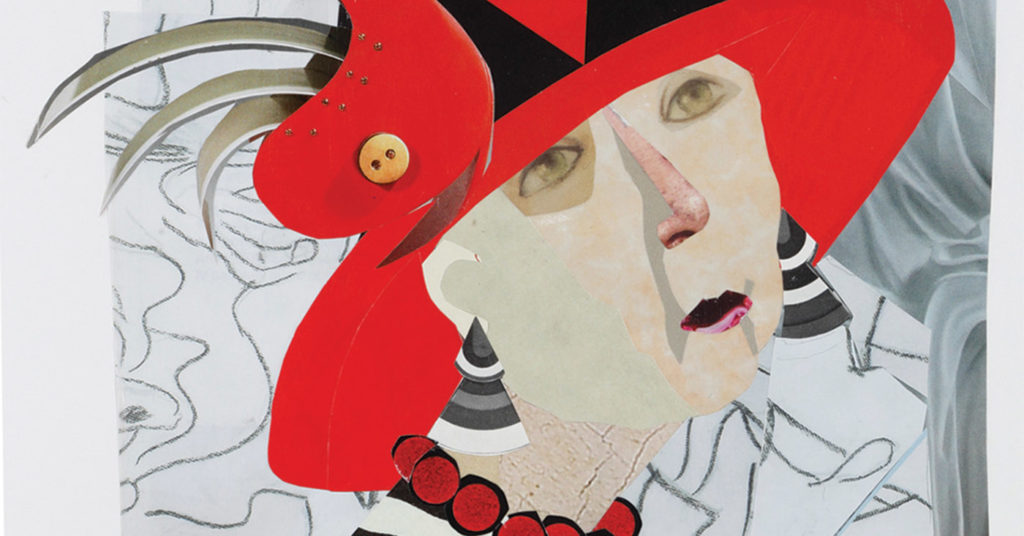 Visual artist Ann Stewart Anderson was a wonderful old woman. She would be delighted by that reference, for that’s the title of her last series before she died on March 4, one day after her 84th birthday. Her “Wonderful Old Women” series, aka WOWs, are paper mosaics of older women in all their glory. “This work continues my engagement with depictions of women … [as they] age with aplomb and grace,” she said.

Women were her subject matter. Anderson was a lifelong feminist who created art illustrating the female experience, from mundane to extraordinary. Women shopping, in conversation, primping. One series was based on Greek mythology that later transformed into “Mythic Women Juxtaposed,” in which she paired mythical characters with contemporary women.

While she preferred to paint in oil, she worked in whatever media best suited the project.

After a trip to Barcelona and viewing the ceramic-covered architecture of Antoni Gaudi, she created mosaics with broken dishes depicting stylish women.

Internationally-known artist Judy Chicago collaborated with Anderson and about 50 more women on the “Hot Flash Fan,” a memorial to menopause. Embroiderers, seamstresses and other fabric artisans created the piece, which has traveled the nation. It is now owned by the Kentucky Foundation for Women (Anderson was the executive director of KFW from 1991-98).

She was also a teacher at St. Francis High School from 1977 to 1991, becoming its first artist-in-residence.

Anderson died of pneumonia and complications from Parkinson’s disease. She was working on new WOWs on the day of her death, an artist to the end.

An exhibition of “Wonderful Old Women” opens on Sunday, May 12 at Galerie Hertz (galeriehertz.com), with the reception from 1 to 4 p.m. Co-owner Billy Hertz requests attendees “wear your favorite hat and accessories that ASA would have appreciated!” It will be on display through June 1.

Gifts in her memory may be made to Kentucky Refugee Ministries or to the St. Francis School art department.

Alun Jones, the former artistic director of the Louisville Ballet, died on April 25 while on vacation in Greece. He was 82.

Ballet superstar Mikhail Baryshnikov danced with the Louisville Ballet — twice — and you can thank Jones for that. Another feather in his cap was his recognition of the talent of Wendy Whelan, currently the Associate Artistic Director of the New York City Ballet.

Whelan attended the Louisville Ballet School and danced in the “Nutcracker” when she was 8. Years later, she became the principal dancer with the New York City Ballet. She credits Jones with “giving her an understanding of how ballet developed over time, a step toward understanding how she fit into the larger picture.”

Welshman Jones and his wife, ballerina Helen Starr, arrived here in 1975 to help start the Louisville Ballet School. He became the artistic director in 1978, retiring in 2002.

When Jones became the artistic director, he said he was “after first-rate works to expand our standard of dancing and, at the same time, provide us with a viable mix of classic, contemporary and new works. My ideal is to create a completely cosmopolitan repertory for us.”

Jones is a past recipient of the Milner Award, one of the Kentucky Arts Council’s Governor’s Awards in the Arts. It is awarded to those who have achieved outstanding artistic contributions in the arts.

The Louisville Ballet is a regional ballet company with a national reputation for staging world premieres. Under Jones’ leadership, the company presented 78 world premieres. Jones choreographed many ballets, including “Cinderella” and “The Sleeping Beauty.”

During its 2018-19 season, the Louisville Ballet presented “Cinderella,” originally choreographed 40 years ago by Jones and Starr. It was an unforeseen, yet fitting farewell.

Arrangements have not been finalized as LEO Weekly goes to press. Updates will be announced on Twitter @jtriplettart.