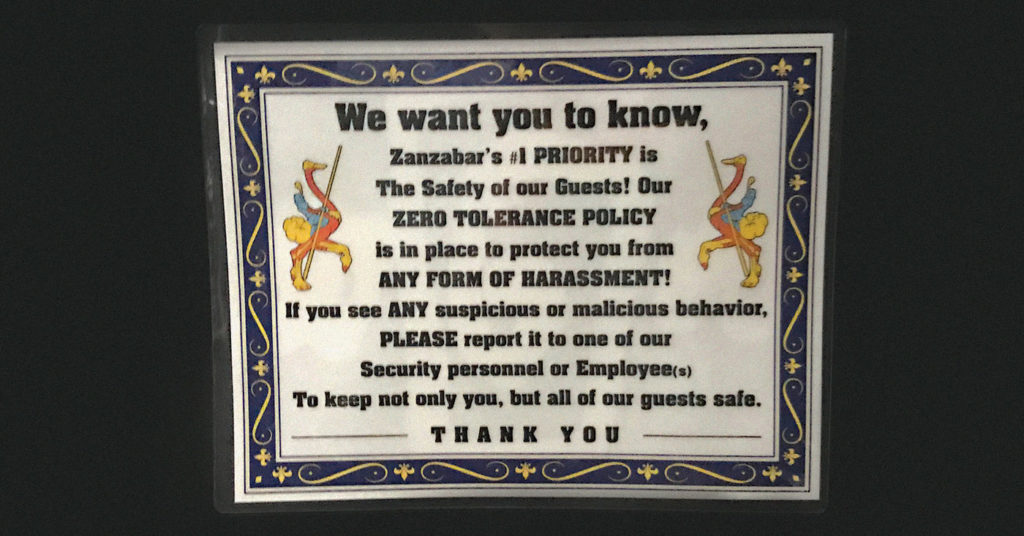 The updated sign in Zanzabar’s bathrooms. | Photo by Danielle Grady.

in her 20 years in the Louisville music scene, Terri Whitehouse has never been aware of a venue with a sexual harassment policy. They were simply either known as helpful or dismissive.

So, when she encountered a sketchy venue, she would warn her friends.

“It’s been, in my experience, that at least in my heyday, that’s sort of how it was done,” said Whitehouse, who has performed in Louisville since she was 21 in projects including Fourbanger and Opposable Thumb.

Now Whitehouse, who is 40 and board president for Girls Rock Louisville, said female and gender-nonconforming musicians seem to be more intolerant of sexual harassment and more comfortable with speaking out against it than she ever did.

“I think if there’s something more organized that people are doing and women are doing to address this type of stuff at our venues, I think that’s really awesome,” she said.

Those women (and men) include Syann Lunsford.

She isn’t a musician, but she attends music shows, and she has been harassed. Three years ago, she was dancing at a venue when a man pressed himself into her backside, she said.

“My partner just dances behind me now, because of stuff like that,” said Lunsford.

Because of that experience and after hearing more recently about friends getting harassed, Lunsford, 22, started Consent & Accountability at Louisville Venues, or CALV, with the goal of pushing bars and music venues to improve how they address sexual harassment. Her preferred solutions include a text hotline for patrons to report harassment to staff and requiring venues to state their anti-harassment rules to each customer as they walk through the door.

Lunsford wants venues to make clear their sexual harassment policies. She hasn’t been able to find one that publicly states its policy online.

“They created this environment. They are in control of this building. It is their responsibility to make sure this environment is safe and that it’s welcoming and friendly,” she said.

Lunsford and other organizers, a core group of three with a Facebook page that lists over 100 members, have contacted 12 venues so far, with 11 more on their list. They have met with one: Zanzabar.

After the meeting, Zanzabar owners Antz and Jon Wettig changed the signs they keep in their bathrooms, which already told customers to report malicious behavior to staff and security, but which now explicitly point out the venue’s anti-harassment policy. The signs now say: “Our Zero Tolerance Policy is in place to protect you from Any Form Of Harassment!”

The Wettigs said, that for the 10 years they have owned their venue, they have had a zero-tolerance policy for harassment of any kind. And they’ve made changes over time, mostly hiring more security, but also adding those bathroom signs. They have security guards each night, off-duty police officers, security cameras, a manager who roams around the bar, a person who mans the door and even a neighborhood security guard on Saturday nights.

When Antz sees problems, he said, he intervenes. Once a few years ago, a man inappropriately touched a woman at the bar. She reported it, and security guards detained him. He was arrested, the Wettigs said.

“I think every bar wants to be safe,” said Jon Wettig.

“Yeah,” said Antz Wettig. “You don’t get into this business trying to create an unsafe place. It’s not your intention.”

Some venue owners, the Wettigs included, said Lunsford’s other proposed security measures might not be practical. She said she came up with them by reading news articles and websites about how European and New York City venues have handled harassment.

With the text hotline, customers can simultaneously text all of the employees in an establishment if they’ve been harassed to tell them what happened. When Lunsford was harassed, she didn’t want to tell staff directly, partly because she wasn’t sure if they’d take her seriously.

The Wettigs said they do not believe her policies would work for Zanzabar. They worry that a hotline would go unanswered in the busy bar setting, especially since their security company has a no-phones policy for its employees. If a patron is being harassed, they said, the best thing that person can do is tell an employee.

Lunsford said in a statement sent via Facebook messenger that it was “disappointing” Zanzabar didn’t take her main suggestions.

“Venue owners need to start understanding that sexual violence, and the environments that bred it, require a more nuanced & committed approach than just tacking a sentence onto a poster in the bathrooms. I hope that some day all venues will unashamedly place the prevention of sexual harassment & assault as a priority.”

Since LEO’s first interviews with CALV and Zanzabar, the two groups have had a dispute and are at odds with how to proceed.

Another venue in town is open to meeting with CALV, however. Billy Hardison, one of the owners of Headliners Music Hall, said that the venue currently has security stationed at the door and throughout the venue, one for around every 100 audience members — plus the rest of their venue staff, although the venue does not have an anti-harassment policy.

“We take a big brother, big uncle, big grandpa approach to every young person that comes into the door,” he said, adding that some people have even complained that the vigilance is too restrictive.

But Hardison said he’s concerned that telling patrons about a harassment policy at the door might be off-putting. He wants to see the research and to know how the measure has worked at venues similar to his. “Maybe it is something we should be paying more attention to,” he said. “That’s why I want to talk to them.”

Despite these hang-ups, Lunsford and her co-organizer Skyler Sudduth, 20, feel that change at venues is more possible now than ever.

“I do feel like, just in a general sense, this particular issue wouldn’t have been taken as seriously [in the past], and it may be that it wouldn’t have been a thing that people would have wanted to come out and talk to us about or wanted to make public,” said Sudduth.

For Whitehouse, the possibility of venues with clearer policies is welcome.

“If they have a sign in their place or say on social media, like, this is how we’re going to do things, and people are going to be respected in our space, I think that would just make so many people feel a lot better and safer,” she said. •