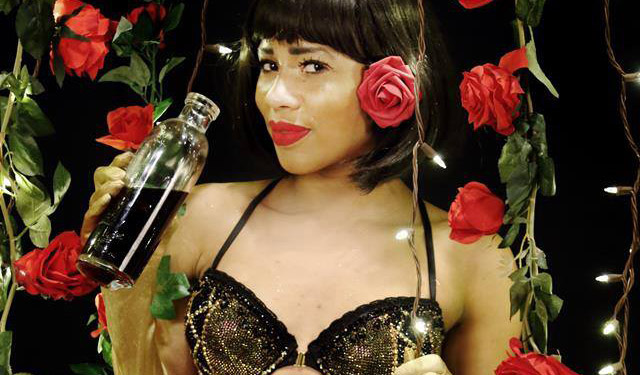 Hellzapoppin Circus Sideshow
Expo 5
$25  |  9 p.m.
Follow ringleader Bryce “the Govna” Graves into the Hellzapoppin Circus Sideshow, featuring performers with unique talents and, uh… features. There’s Erik Sprague, or The Lizardman, whose intense body modifications, including a split tongue and extensive green scale tattoos, have earned him a wax statue in multiple Ripley’s Believe It Or Not! museums. You’ll also meet Short E. Dangerously, who can walk on broken shards of glass while on fire, Derek “Dirty D Hurricane” Cockrum who’s quite handy with the YoYo, and Willow Lauren who can eat fire and regurgitate razor blades. Seriously.

Holly’s Local Honey: A Burlesque Spectaculare
Mercury Ballroom
$25-$45  |  9 p.m.
Performer Holly Harvest wants burlesque to become a Derby tradition, and with the horse race’s history of decadence, she’s probably onto something. Come for an evening of “sophisticated debauchery,” featuring dance, aerials, comedy and acrobatics — performed by Harvest’s favorite local entertainers. It’s all part of what she calls a resurgence in Louisville’s burlesque scene, under the umbrella of Bourbontown Burlesque.

Free Indiana State Parks Sunday
Multiple locations
Free  |  All day
There are a handful of awe-inspiring Indiana state parks just outside of Louisville, and all of them will be free Sunday. Visit Charlestown State Park, just 25 minutes away, to explore the ruins of the abandoned Rose Island amusement park. Or, if you’re a local looking to get out of the city for Derby weekend, take an hour drive to Clifty Falls State Park in Madison, Indiana, which features some of the most rugged trails in Indiana, with steep valleys, 60-80 foot waterfalls and caves (although these will be closed to protect the state’s bat population). There’s also O’Bannon Woods State Park in Corydon, Indiana — 45 minutes away from the city and nestled inside the 24,000 acre Harrison-Crawford State Forest.

Historical Walking Tour of Cave Hill Cemetery & Arboretum
Cave Hill Cemetery & Arboretum
$15  |  noon-1:30 p.m.
It doesn’t matter if you’re a tourist or a local, Louisville’s Cave Hill Cemetery is a fascinating and hallowed place, housing the final resting places for some of the city and the state’s most well-known former residents, including Muhammad Ali, George Rogers Clark and Colonel Sanders. It’s also quite scenic, with 296 acres of thoughtful landscaping, lakes and artistic monuments. Louisville historian Steve Wiser knows pretty much everything there is to tell about the historic burial ground, and he’ll be leading this midday tour with stories of the Satterwhite family, James Guthrie and other prominent Louisville figures who both shaped the river city and chose it as their place of peaceful internment.