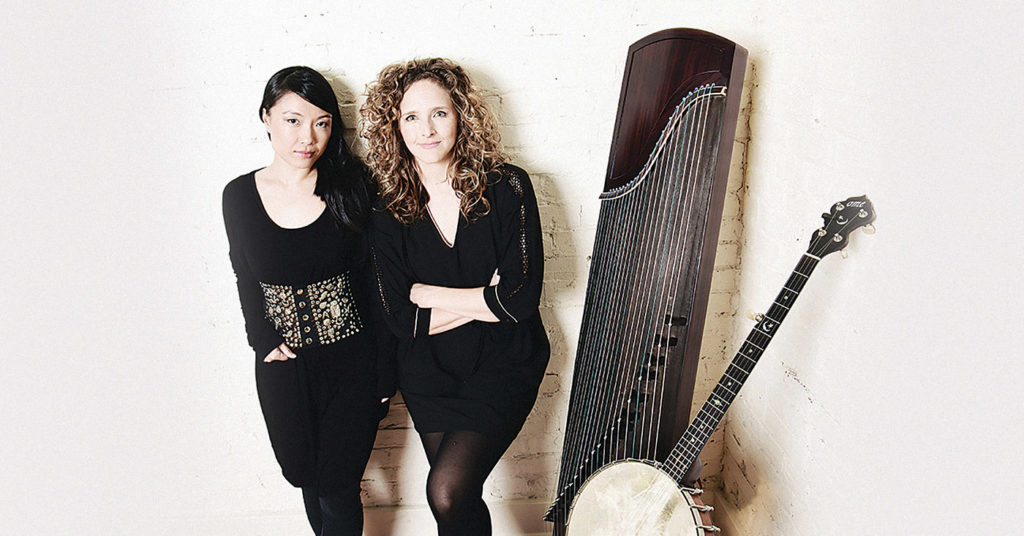 Abigail Washburn and Wu Fei are two string players from different, yet equally dynamic, backgrounds. Washburn, who lovingly clasps the stylings of clawhammer banjo, is a Grammy award winner and the marital partner of banjo virtuoso Béla Fleck. Fei, an accomplished composer and singer currently based in Nashville, wields her traditional Chinese zither called a guzheng. A mutual openness to new opportunities intersected their journeys, eventually leading to a dazzling collaboration as a duo.

The two powerhouse string players have been collaborators and friends for more than 13 years, melding their respective traditional sounds of Chinese and American folk music with twists of modern innovation and unique lyrical vision. With a new album in the works, which is slated for next spring, Washburn and Fei will debut new music at The Kentucky Center on May 17, where they will perform as a duo. It is not often these two get together in this way, but they’ve remained consistent, making sure to schedule at least a few annual shows that reflect their music as a duo — this is one of those special evenings.

Marrying clawhammer banjo and the dreamy guzheng sound, the music vacillates between English and Mandarin (they are each fluent in both languages), as the harmonized verses bloom their mystique petals of folk, bluegrass and classical Chinese influences. This connection reflects the greater spirit of their songs, which is the universal link that music takes hold across all cultures. “After it’s translated, you realize how similar people are from different sides of the world,” said Fei. “How similar their emotions, their love and their hope.”

Washburn said she never anticipated music as a career — when she was offered her first record deal at the International Bluegrass Music Association convention, she was poised to finish law school. She was just 23 at the time when her entire life shifted: “I was like, ‘Oh My Gosh, you mean I could make music for a living? I only know four songs [Laughs].’” Now at 41, Washburn is an exceptional performer and songwriter with a range of albums to her credit, including ones with her husband Béla Fleck, who will produce her and Fei’s next record.

Fei, on the other hand, was the fastest picker in her class at her Beijing music conservatory where she had practiced since the age of 5. But, she felt overly structured in her musical training growing up. When she moved to America to continue her studies at North Texas University, her world changed.

“China gave me a very solid foundation in terms of musicianship and training. And the U.S helped me to find my own voice,” Fei said. “So much training can feel like a leash on you. You can’t get out of that box, because you’re pressured not to. I’ve always had a free spirit, and I felt very confused and not really enjoying playing music. But, coming to the states, even in the first year, I got to see jazz bands, African drumming ensembles, Indian rock and singers, just so many things that I had never even seen in my life. As soon as I started understanding what improvisation was, that really saved me from questioning.”

Fei continued to explore that free path, later collaborating with avant-garde composers such as John Zorn and cutting a record with English guitarist Fred Firth. She is currently the composer-in-residence for Nashville’s chatterbird ensemble, and she recently debuted a new piece titled “Hello Gold Mountain” at Vanderbilt University.

Washburn and Fei first met and played together more than a decade ago in Colorado, when Washburn was in a group called The Sparrow Quartet. They remained in contact for several years before Fei’s family eventually moved to Nashville four years ago, where Washburn also resides. The chance to explore new possibilities heightened, resulting in the two writing material together.

“Music is one of the easiest ways to break barriers,” Fei said. “You don’t even need to speak the language from each other — we do, actually, in our case — but if you don’t, you just pluck the instruments together and totally understand each other instantly. It’s such a beautiful and unique and precious thing.”  •