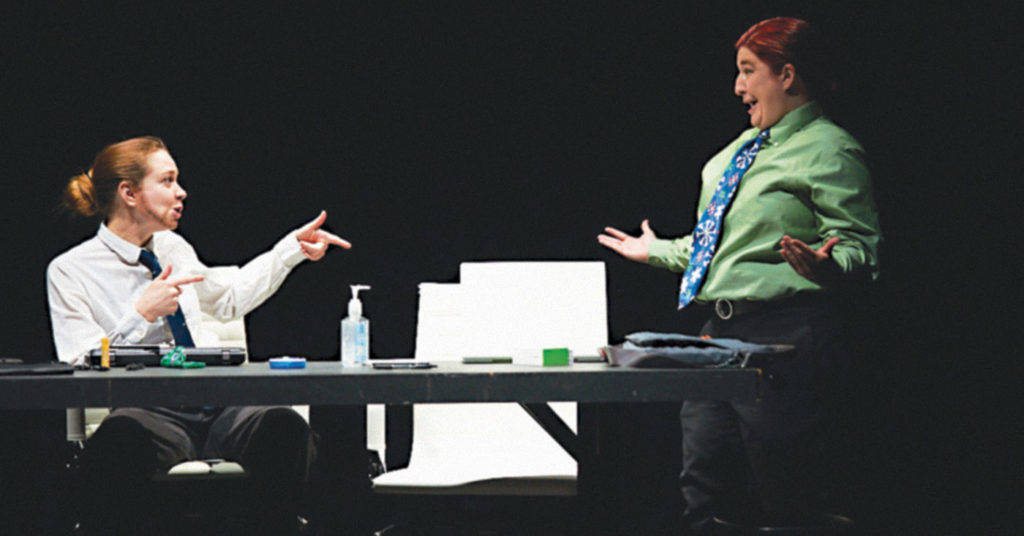 We’ve all seen the pictures before. On the internet, it’s become something of a joke: stock images of a lone woman, always young and usually white, holding a bowl of salad — not quite eating — and laughing. Why? It’s never explained, and it doesn’t really matter. It says something about the way our society views women, as objects and images rather than fully-fleshed people. In fact, it makes such a statement that playwright Sheila Callaghan was inspired to write an entire play about the ludicrous series of stock photos.

Callaghan’s “Women Laughing Alone With Salad” is a good match for theatergoers who enjoy Mara Nelson-Greenberg’s surrealist, topical plays or many of the shows put on by the Humana Festival of New American Plays or Actors Theatre’s training company this season. While this show is distinctly Theatre [502]’s style, it does have a similar quirky feeling to it, with a small but versatile cast and themes that occasionally stop the audience members in the middle of a laugh and rattle around in their brains for days afterward.

This pointed, thought-provoking play fits well as the ending for Theatre [502]’s current season, following a portrayal of a young woman trying to find her voice as a composer (“A Feminine Ending”) and a haunting, intriguing story of a young boy who inherits an art museum during the Mexican revolution (“Sergio’s Museum”). However, while both of those previous plays were close-up character studies of the protagonists, “Women Laughing Alone With Salad” feels more high concept.

In fact, the only character who seems to really have a fluid internal arc throughout is Guy (Eli Keel). The women struggle with the image-obsessed culture in which they live — with eating disorders and with fighting off the signs of aging, but they all feel like character types: Tori (Gracie Taylor), the health and fitness nut; Sandy (Dee Smith), the aging, former activist; and Meredith (Jessica May), the audacious fat girl with the retro style. Stock characters, if you will, whose personalities seem to revolve around how they relate to Guy.

This is not to say that the portrayals of the characters are lacking. May plays Meredith’s swings between daring bravado and insecure defensiveness, her romanticism of decadence followed by immediate shame when she actually indulges, in a way that’s devastating. Taylor gives Tori a constant motion of energy, and everything about her demeanor makes you feel how hard she’s trying. Smith shows comedic aptitude from the beginning and delivers a stilling performance as she tells Guy about her decision to keep him and marry his father. They make the women feel believable, but the stories aren’t particularly nuanced here, as if portraying concepts of women meant to represent issues women face in our society rather than characters with fully fleshed out arcs. This is no doubt intentional, a commentary on the stock photo inspiration as well as the way that female characters are often portrayed only in terms of how they affect the male protagonist.

It’s a little disheartening for female audiences who already know the score and want to see women who feel real, especially as it’s difficult to sympathize with Guy. Up to the end of the show, he continues to think of these women in terms of how they affected him, how they “haunt him.” However, the show is very aware of Guy’s clear avoidance of the point. We’ve all known someone like Guy, and likely members of the audience have been someone like Guy. It may not be much of a character study like the past shows, but “Women Laughing Alone With Salad” is nothing if not clever and effective in getting its message across.

A clever element of this show is the shift in the cast between Act One and the much shorter Act Two. When the lights come back up, May and Taylor play a pair of male coworkers preparing their presentation. Their second act characters parallel their first act characters: Joe works out constantly as a “masculine” answer to Tori’s yoga, and Bruce is indulgent, a “beer guy” who pats his belly proudly and seems to feel none of the shame that Meredith experiences. Both are much more open and even crass about what they want sexually than Tori and Meredith, because of course, no one minds with them. Through several slivers of callbacks, the audience is forced to confront the double standard between the way men are allowed to exist and the way women are made to exist in our society.

It’s Smith who shines in Act Two, transforming from the take-charge energy of Sandy to now portray a world wearier Guy 14 years later. He’s given up the dream of becoming a writer or fighting the man. He now works as a project manager in a marketing department. His current project? Selling antidepressants to women through use of stock images of women laughing alone with salad. Keel — a nonbinary actor who plays Guy for the first act — now plays Guy’s female boss, Alice, who isn’t much interested in being another prop for Guy’s character development.