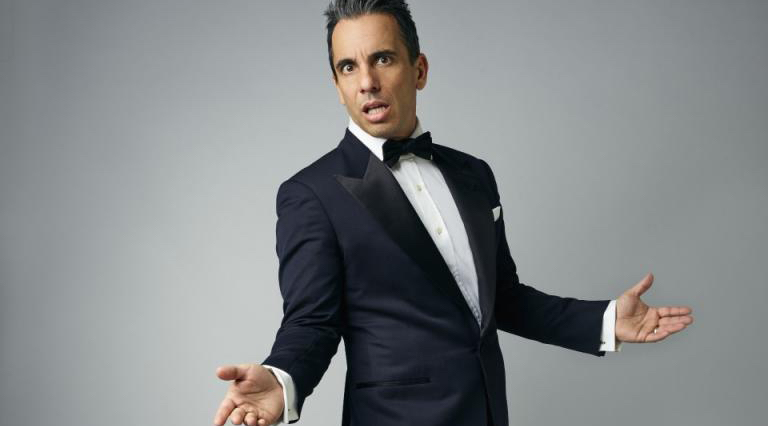 Stand-up comedian Sebastian Maniscalco was in the Academy Award Winning Best Picture “Green Book,” last year. This year, you will see him in “The Irishman,” undoubtedly another Best Picture contender. Maniscalco joined a cinematic all-star team for that one: Martin Scorsese directing and starring Robert De Niro, Al Pacino, Joe Pesci and Harvey Keitel. “I didn’t sleep the night before,” he told LEO. “I just knew I was going to get there, and they were going to realize they’d made a huge mistake. Like, ‘No, we meant the other guy.’” Maniscalco returns to stand-up for one night only at The Brown Theatre.

LEO: After decades on the road, you’re playing theaters primarily. Do you like that environment over the clubs you came up in?
Sebastian Maniscalco: When I was coming up 20 years ago, the guys in theaters were the guys who had really made it. They were stars, guys like Seinfeld. That’s nice. But now, comedy shows are filling arenas and stadiums regularly. I was talking to my agent last week about this. I asked how many more comics he represents now, over how many he repped 10 years ago, that do theaters. He said it’s probably up 40%. It feels to me like theaters have become the new comedy club. I mean, you have to do comedy clubs. You have to establish yourself as an act and work on your craft — don’t get me wrong. You also have to build an audience, and clubs are the best way to do that.

Did you know ‘Green Book’ was a special project from the outset?
It was special to me because of who was involved. I have been a huge fan of [‘Green Book’ director] Peter Farrelly since ‘Dumb and Dumber’ and ‘There’s Something About Mary.’ Also, being his first foray into dramatic films was a really special thing to be a part of. Then, you put Mahershala Ali and Viggo Mortensen in there — there was no way it wasn’t going to be special, right? I was just happy to get the role. I never thought about an Oscar or anything. I don’t have any real experience in filmmaking to be on set and say, ‘This is really special.’ I was just happy to be there, and a little nervous.

As someone who is normally an outsider to the glamorous Hollywood scene, what was the Oscars experience like for you?
It’s a lot of pomp and circumstance. Obviously, there’s the red carpet — which I normally don’t like to go down. You’re just standing there awkwardly while people take your picture. Of course, the Oscars red carpet is the granddaddy of them all. The people ahead of me were Lady Gaga, Spike Lee and Ryan Gosling. You look up there, and the flashes are blinding. It’s like lightning. Then I walk up, and it’s a piss break for the photographers. They’re like, ‘Who?’

It’s been a good year for you, transitioning to acting. How does it feel to now be able to say you are in the Oscar-winning Best Picture?
Yeah, for a guy who really does stand-up for a living, for me to land this role in this movie, and then it wins the Oscar — that’s something you can’t really script. I really don’t do much acting at all, and then I find myself at the Oscars last month. I almost had to pinch myself. And with ‘The Irishman’ coming out later this year, it’s a really good way to bookend 2019.

Speaking of ‘The Irishman,’ being on the set with icons such as Scorsese, De Niro, Pacino and Pesci had to be intimidating.
I didn’t sleep the night before. I just knew I was going to get there, and they were going to realize they’d made a huge mistake. Like, ‘No, we meant the other guy.’ I was concerned about holding my own. My first day I was shooting with De Niro and Pesci, so it’s not like I eased into this at all. From day one, we were off and running. On the set, they were really gracious and helpful and made me feel comfortable. And watching Scorsese work his magic — it’s an experience I will never forget. Plus, I can’t wait to see the movie, I haven’t seen anything from it yet. Hopefully, they didn’t cut me out.

You realize that it’s likely you’ll attend the Oscars two years in a row.
[Chuckles] I don’t wanna jinx myself, but yeah. Anything’s possible.