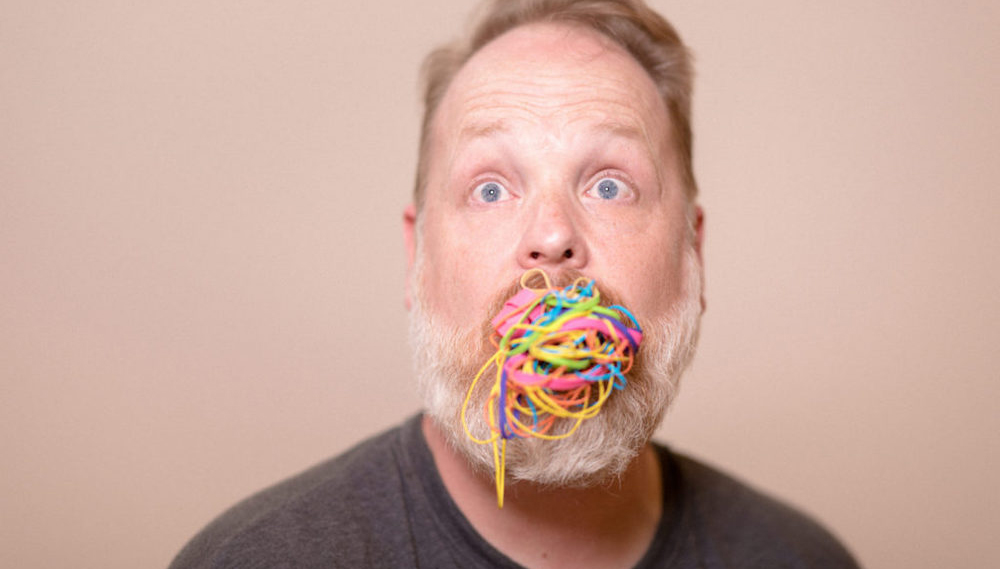 Even though he was raised a few miles up the road in Clark County, Indiana, rocker turned stand-up comedian Mat Alano-Martin considers Louisville his hometown. He recalls a childhood of skateboarding through Louisville streets, watching “The Rocky Horror Picture Show” at The Vogue Theater and catching punk shows all over town. “ I have a lot of friends and family there and I have new material I’m excited to show off,” Alano-Martin said of performing to “hometown” crowds again. “Like one of those dogs who meets you at the door with dirty underwear in his mouth.” Mat Alano-Martin headlines The Caravan this week.

LEO: What was growing up in Indiana like for you?
Mat Alano-Martin: I was raised in Clark County. We weren’t dirt poor, but we definitely weren’t middle class. My parents divorced when I was 9 or 10, then dad kind of disappeared for a huge chunk of my life. I tracked him down as an adult and reconnected with him to mixed results. I have actually been talking about that onstage a lot lately. Also, in a lot of ways I consider Louisville my hometown. It was only 20 minutes away. We would go downtown and skateboard; catch “The Rocky Horror Picture Show” at The Vogue. And we were down there for punk shows all of the time.

Are ‘hometown’ shows, where you know so much of the audience personally more pressure?
They used to be, for sure. Now that I’m more professional, not so much. The shows definitely do have a different energy. Honestly, I have a lot of friends and family there, and I have new material I’m excited to show off. Like, one of those dogs who meets you at the door with dirty underwear in his mouth. I’m just pumped to see them, and I want to bring them my best.

Is it hard balancing a marriage while being on the road so much?
I don’t think it’s too hard for us. It makes us appreciate each other more. When I started dating her, I was tour managing for bands. So, the road has always been a part of our relationship. And, with bands, you go out for months at a time and don’t see each other. When it comes to comedy, a couple of times a year I might do a stretch of three weeks without seeing her. She probably wishes those stretches were a little more frequent, at this point.

Is there a common thread between your musical and comedy influences?
I don’t know that there’s a lot of common thread in them. When I was a little, I was really into classic rock. Then, I got into heavy metal which led me to punk. As far as comedy goes, I’ve been a comedy nerd my entire life. I didn’t do comedy until relatively late: I was 35. My big influences when I started were guys like Chris Rock, Dave Chappelle, and Dave Attell. Now that I’ve been doing it a while, I’m more inspired by people like Stewart Huff, Chris Gethard, Maria Bamford and Tig Notaro.

You say there’s no common thread there, but much like your punk roots, those are all subversive comics who like to buck the system.
Definitely, with Gethard. He comes from that world, too. And with Bamford and Tig, they definitely do stuff that is outside the mainstream. So, yeah, I could see that. We’ll go with it.

What are some awful gigs that stand out in your mind?
I definitely did a show in Washington state where it was a free bar show. The bar was downtown in a very economically depressed city. The only people who were in the audience for the show weren’t there for comedy. They were meth-heads trying to get in from the cold. I’m onstage telling jokes watching these people pick off their flesh and tweak out. It was very horror story-esque. It’s one of those things where you do your time, get paid, and get the fuck out of there.

As a performer, you started out as a musician and became a comedian. Did the musician experience help when you started out in comedy?
Definitely. It was still very different, but I think I had a leg up on other first-timers because I was comfortable onstage. It is still radically different being able to hide behind your instrument. In music, even if the audience doesn’t like the song, they’ll usually give you a polite clap. Then, the song is over in three minutes. In comedy, second by second your entire set you know whether the audience is on-board or not. And there are no polite claps in a comedy club — it’s funny or it isn’t.