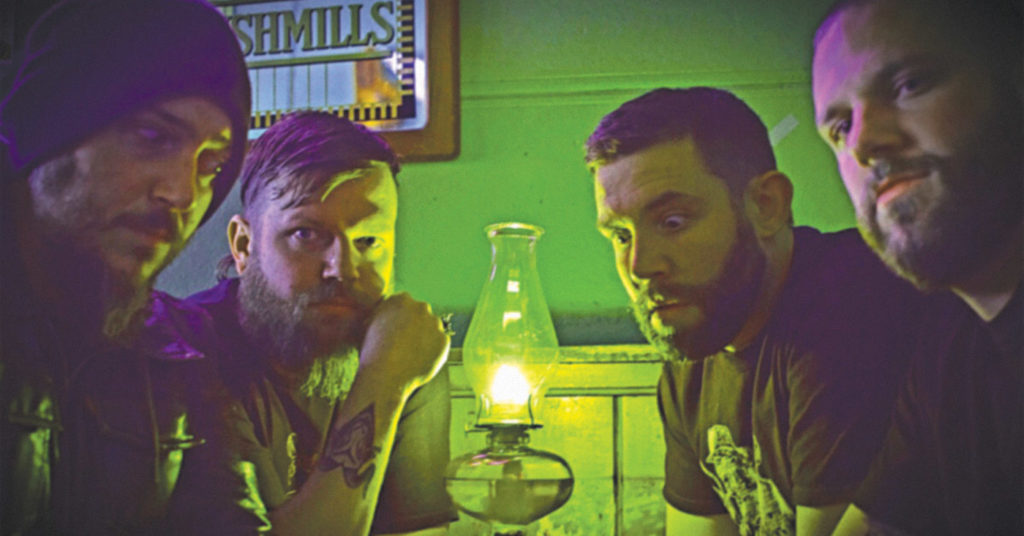 The horror rock band Prayer Line draws a heavy amount of influence from movies and true crime, layering their songs with references to dark, gory aspects of fictional and real events. Before the band releases their debut album, Drink The Blood, during a show at Highlands Tap Room this weekend, we asked them to dissect the inspiration behind five of the album’s songs. And, as you would expect, it’s influenced by a lot of obscure pop culture and a few serial killers.

‘One That Can See’

“Anyone that knows me, knows that I’m always trying to sneak professional wrestling into my art. This was the sport that encouraged me to love the evil character. ‘One That Can See’ is based on [the 1998 film] ‘They Live’ starring one of pro wrestling’s greatest bad guys, ‘Rowdy’ Roddy Piper. This movie is incredibly relevant in the social and political climate of 2019, especially if you believe we’re being controlled by alien reptilians or something. ‘They Live’ is definitely a top-three movie for me, but I also wanted to write a song in tribute to my favorite Kentucky artist, John Carpenter, who directed and scored the movie. The speech at the end of the song is from the blind preacher in the movie’s first scene, and when I say ‘Brush Your Fucking Teeth,’ well, that’s a joke about the song ‘Rock You To Hell’ by Grim Reaper.”
—Jake Hellman

“Drawing inspiration from the Ed Gein-based [1974] film ‘Deranged,’ I felt compelled to really drive home the depiction of the twisted mother/son connection between Ezra Cobb — the renamed Ed Gein character — and his fanatical, bible-thumping parent, as well as his fucked up relationship with women in general. It felt natural to take this subject matter and write an uptempo Misfits-esque song that would eventually include hammy dialogue as well as a shrieking, Crypt Keeper laugh that I feel really encompasses the vibe of what we’re all about as a band.” —Phil Olympia

“This song changed quite a bit from demo to final recording, as it was originally a cross somewhere between Ghost and Jaye Jayle. I had an image of being chased by zombies with bloody eyes, and that’s all I wanted to get across. I wanted to repeat “I see them coming / They’ve got blood in their eyes” over and over. I brought the song to the band and Phil had vocal ideas about [the 1974 film] ‘The Living Dead at Manchester Morgue’ that really took the song to the next level. Then, we wrote a bridge/solo section as a band that makes me think about Frankenstein being chased by pitchfork-wielding villagers. ‘Run’ feels even more like the chase I originally envisioned as it grows throughout the song, eventually climaxing with what I can only assume is the death of the listener.”
—Jake Hellman

“Motivated by music from The Damned, Jake Miller brought this song idea to practice where it quickly sparked a witchy vibe inside of me. I’d just revisited the black and white classic The City of The Dead [from 1960] which stars Christopher Lee as the leader of a coven that lures in an unsuspecting lady to be their next pagan sacrifice. Naturally, I was then inspired to create a melody with lyrics that aim to emit a similar paranoid tension as they touch on the ongoing deception that could lead to evil immortality.”
—Phil Olympia

“This song began as a riff that Phil uploaded to our Google Drive. He had something much slower in mind for the song, but the second I heard it, I knew what had to happen: This would be my homage to Judas Priest. I immediately heard the melody where I sing the words ‘Mephistopheles’ on the first listen. However, I didn’t know what I should say, so I typed ‘Devil’ into a thesaurus. ‘Mephistopheles’ had the right amount of syllables for the melody and brought me back to reading “Faust” in college. The words then came pretty easy, as I imagined myself as a sexy, punk rock demon/devil commanding my followers to drink my blood and set their souls free. I also had to throw in my favorite line from the poem, “Everything that comes to be, deserves to die wretchedly.” —Jake Hellman