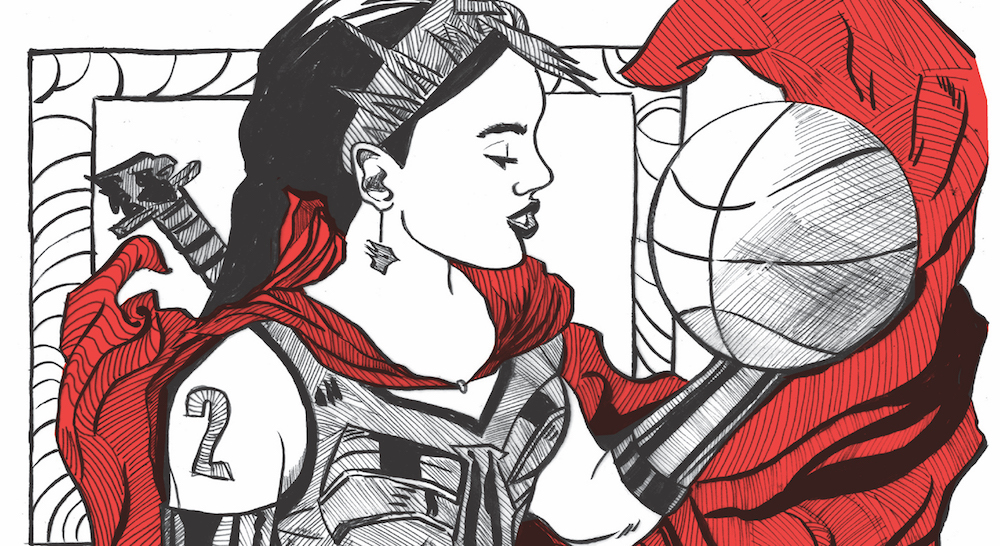 A detail of a LEO cover image created by Kevlen Goodner

The CD cover’s title screamed though its black backdrop with a painting of President George W. Bush, affixed with vampire teeth, gripping the Statue of Liberty’s neck.

That was when I first met Kevlen X, a local hip-hop artist whose lyrics were a biting political surgery of the times. Through the years, however, I had gotten to know “The Illestrator” on a much deeper and personal level as a father, a counselor and a man with an unquenchable thirst to express his and his people’s struggles.

I last spoke with Kevlen Douglass Goodner while standing in the dining room of my West End crib — proudly dubbed the “Bailey Cave” — in late December.

Kevlen had done three illustrations that accompanied my columns during a brief stint as a writer for Louisville Magazine. I wanted those joints to hang in the house, and I also asked if he could paint a giant mural of the great intellectual W.E.B. Du Bois for my living room.

Kevlen had a way of doing that, of course — correcting with a suggestion that he said would make the paintings pop. I should refinish the hardwood floors first so it would feel like an art gallery. He also wanted to have famous Du Bois quotes in calligraphy that would crawl across the walls leading to the main mural.

Like many of our conversations, however, we quickly turned to how we were still absorbing Marvel’s “Black Panther” which had come out 10 months prior.

We then pivoted to a conversation about my copy of “King Leopold’s Ghost” a book that explored the exploitation and holocaust of the Congo Free State by the Belgium monarch. Ironically, it involves another Louisville black man who spoke out: William Henry Sheppard, a Presbyterian missionary who helped document the atrocities in the Congo.

The talk ended about two hours later with a debate about today’s best hip-hop lyricists: Kendrick Lamar or J. Cole. I eventually dropped Kevlen off along Bardstown Road before bidding him a final farewell.

“Aiight family, peace,” he said. “I love you brother.”

A day later, Kevlen had a stroke.

Kevlen’s art used thick lines that exploded with a heavy black ink and even bolder characters. The work carries an unmistakable comic book flavor with a graphic noir influence that devoured as much negative space as a page had to offer. The messages aren’t subtle. In one piece, he drew former NFL quarterback Colin Kaepernick slugging a neo-Nazi.

But mostly Kevlen did portraits of fans with their head or face on the body of their favorite comic book character.

“In a time where we are fighting just to tell the world that our lives matter, Kevlen took everyday people and drew us as superheroes,” said poet Hannah Drake, who met “The Illestrator” three years ago at a local bakery. The two struck up a conversation and he eventually did a portrait of her.

Which Kevlen you met and you know says more about you than the man.

You may remember Kevlen as a teenager or 20-something Louisville rapper who grew up in the Okolona area and went by the stage name King Crush. In those days he was a member of Nu Cali, a hip-hop trio that signed a record deal with an independent Florida-based label. You might recognize him as Kevlen X, who had a fitted bow tie matched by a stern gaze and tight handshake. In those days, he worked as a prison chaplain for the Nation of Islam, who helped convert many to the religious sect and rehabilitate black men stuck in the prison system.

But you probably know him as “The Illestrator,” an influential cartoonist who was a fixture at a Highlands coffee shop, taught art classes and was a familiar smile at local and national comic book conventions. It is in that world that Kevlen and his images have been immortalized, since the 48-year-old artist died last Wednesday.

“I knew him as dad,” Justice Goodner told me Sunday. “He and I always had an unspoken connection, and what I’m finding is that is something not everyone has with their parents.”

Justice, 24, is an illustrator himself, who has nearly the same word choice and speaking style as his father, his first art teacher. He would trace over his father’s work while listening to a steady diet of KRS-One, Run DMC and Rakim. “I started to pay more attention to what he was doing,” Justice said. “And noticing that this guy draws too, just like me, and he’s encouraging me to draw.”

Justice said that he and his brother Jabril and sister Yasmine acknowledge “of course it sucks” that their father is no longer here but that he explicitly told them it would be “wack” to remember him the way he was in his last months. Kevlen wanted his life and his art to be celebrated, Justice said.

Louisville rap artist Father Jah first met Kevlen in 1992 as a gifted orator whose rap persona had the confidence and style of LL Cool J while his lyrics contained the message of Chuck D and intensity of Ice Cube. “We lost the personification of multitasking,” Jah said. “The same guy who had an impact on hip-hop heads had an impact on the Black Power community and the fucking impact on the Bardstown Road kids who enjoyed art and comic books. That’s a living renaissance man.”

That is how Louisville filmmaker Jason Mattingly describes Kevlen too. They met during a snowstorm about a decade ago when Kevlen was coming in for a job interview. The two struck up a conversation about comics that led to a biracial buddy cop film of them traveling to multiple conventions together. “Kevlen broke the mold on stereotypes,” Mattingly said. “I was there many times when people would approach him, thinking one thing about him or another. He would shatter their expectations. His internal encyclopedia of comic history was vast and many would seem to strike up a conversation about some unknown (to me) character, and he would be right there, without a moment’s hesitation, to double-down on the facts.”

Mattingly said Kevlen’s “art-fu” disarmed people of their prejudices and that his message of “just create” was liberating.

But Jah said Kevlen, his longtime friend, also wasn’t afraid to be critical in personal or professional matters when you needed to hear something. “Put it like this, I put out my first cassette tape in 1992,” Jah said. “You know I’m only 16 years old, and it’s called ‘Countdown to the Beat Down’ so it’s revolutionary for the most part. So everybody is loving it, because I’m a 16-year-old kid who is doing something positive — how can you not like it?”

As Jah recalls, Kevlen did not.

“When I let Kevlen hear he went, ‘Yo, this shit is wack! Who did the production on this, Herbie Hancock?’” he said. “That will ring in my head forever because it was hilarious but true. And he broke down to me what he didn’t like and I was able to sharpen my skills, and I wouldn’t be the artist I am today without this dude.”

Weeks had passed since we had talked, but Justice sent me a Facebook message letting me know I could pick up the three pieces at the Preston Arts Center.

I asked about his dad, and he said the recovery was going well.

I went to the center and was overwhelmed seeing them in their gallery presentation. I rushed home and laid them out on the hardwood floors Kevlen had suggested. I gave him a shout out on social media and told him to get well soon so we could hang them together.

The next day, Kevlen died.

I will remember King Krush, Kevlen X and “The Illestrator” as the best of us. As an honorable man who, like Muhammad Ali, evolved from warrior to artist to high priest by putting the people he loved so much in his art.

Phillip M. Bailey is a journalist.