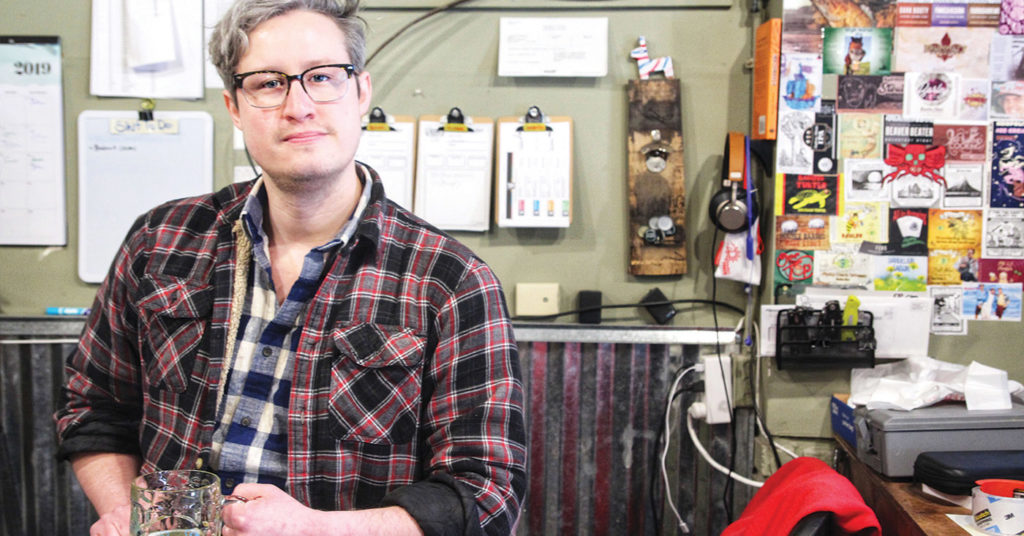 John and Sam Ronayne started Brewgrass Homebrew Supply in June 2015. And while, yes, homebrewing is a fun hobby, and Brewgrass certainly has attracted its fair share of newbies and amateurs over the last four years — the humble homebrew shop in Germantown is partly responsible for much of Louisville’s continued brewery growth and creativity.

“In addition to being a retail store for all the local homebrewers, we keep accounts for all the local breweries,” John Ronayne said. “So, if somebody is low on two bags of two-row malt or a strange ingredient or hop variety, the brewers can come down and grab whatever they need.”

Long before a brewery officially opens in Louisville, Brewgrass Homebrew Supply usually hears about it. “It’s often a homebrewer who has been doing it a long time already,” Ronayne said.

And if you’re interested in homebrewing, Ronayne said, all you need is an appreciation for beer to start. Those with a tinkerer, culinary or science background will probably flourish in it, given enough patience.

“Brewgrass is the real MVP,” says brewer Spencer Guy of Akasha Brewing Co. “I would not be where I am today without a local homebrew store like Brewgrass. John has saved us on multiple brew days — just by being a phone call away 24/7.”

Now, homebrewing and craft beer always have (intrinsically) gone hand-in-hand with various ebbs and flows within the industries throughout the decades. The rise in the variety of craft beer styles, drinkers and professional brewers in the Louisville area has certainly changed the homebrewing shop and the way it stocks inventory.

“Growth has been the biggest thing. We’re able to have a broader inventory now,” Ronayne said. “We very rarely don’t have something that somebody needs. … Now, we’re at the point where we think an extra 500 square feet would be nice… maybe at some point.”

Ronayne’s homebrewing advice and expertise don’t stop at the entrance of Brewgrass Homebrew Supply. He and his lifelong friend and fellow beer advocate Ricky Burdette started “Boy Meets Wort” in 2017 to both entertain and educate the craft beer community through YouTube and Facebook videos… sometimes in the most ridiculous way possible.

“We’re trying to share information about homebrewing and demystify it, but we also try to be an evangelical arm for Louisville beer in general,” Ronayne said.

Burdette sees “Boy Meets Wort” as a way to expose others to their philosophy — that the business of beer is serious but enjoying it certainly shouldn’t be.

In addition to video work, “Boy Meets Wort” has begun to collaborate with local breweries for unusual and experimental styles of beer. “We try to bring a homebrew mentality to a large-scale system,” said Ronayne.

“We want to brew something in line with what they usually do,” Burdette said. “But not just the same thing. We want to add our mark to it. We want to leave them better than they were before they did something with us.”

Another collaboration with Against The Grain Brewery was for the brewery’s 10th Annual Wild and Sour tasting event — a kettle-soured farmhouse ale called Cumma Cumma Chamelion. This beer with a “South American flare” was brewed with wild cacao yeast, cacao tea, papaya and camu camu powder — coming from a South American berry with a very strong tart, cherry flavor.

The annual event, held at Against the Grain’s Bottle and Gift Shop at 401 E. Main St. is on Wednesday, April 10 at 7 p.m. It showcases all the rare, specialty, spontaneously fermented and sour beers from eight regional breweries that Against the Grain expects will make the attendees “pucker with delight.”

Wild and Sour was created in response to the notion that only Europeans can brew good sours. “Here in America, we can make sours too,” said Katie Molck, marketing and media maven for Against the Grain. Molck went on to explain that the bugs (wild yeast and microflora)  responsible for spontaneous fermentation aren’t just living overseas.

Coffee will be provided by Bean and specially-crafted aperitifs and digestifs will accompany the meal, thanks to Copper & Kings Distillery, with music by DJ Sam Sneed. •