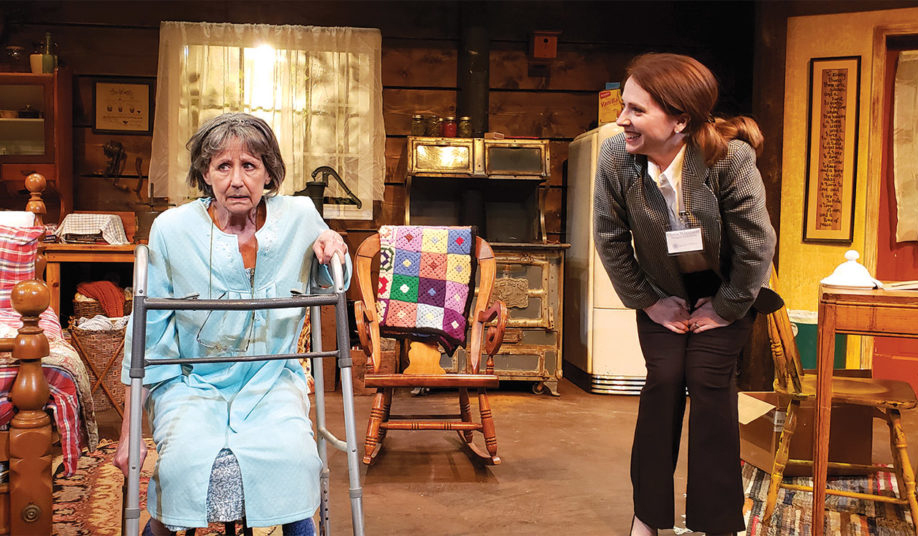 “Grace and Glorie” is one of the Bunbury Theatre Company’s more intimate productions this season. Just two actresses — Rena Cherry Brown as Grace and Katie Graviss Bechtler as Gloria (whom Grace insists on calling “Glorie” due to a hymn her mother used to sing). It all takes place in one room over a period of a few days, and the entire show focuses on the relationship between the two women: Grace is an elderly woman from the mountains of Virginia dying of cancer, and Gloria is a hospice volunteer recently moved from New York. And the simplicity of the story, allowing us to focus on the characters and their relationship, is its strength.

As many relationship-centered stories begin, the two main characters appear to be opposites who have more in common than it seems. Grace is a woman set in her ways. She’s scarcely left the farm on which she lives since she first married. She still uses an antique wood stove and a water pump, believes in staying busy and doesn’t ask for help under any situation. She keeps busy at all times, knitting a sweater for her great-niece, feeding the chickens and picking apples from her beloved orchard. “Idle hands are the devil’s workshop,” she says.

Gloria misses life in the city and likes to have all the modern conveniences, which adds to the sense of horror when she sees the way Grace lives in her last days. On the other hand, Gloria often finds herself lost in thought, which exasperates Grace, as does Gloria’s inability to take no for an answer. In fact, at times Gloria’s forceful nature, even when she means well, causes more trouble for Grace than anything else. But the main thing these two do have in common is death, in particular, the death of children. In Grace’s 90 years of life, she’s buried all five children, while Gloria’s move to Virginia was actually brought on by the death of her young son.

Through their growing bond and conversations throughout the two-act play, the show is able to explore themes like faith — whether the idea of an omnipotent God brings more comfort or anger or a mixture of both, loss and fear of death, even despite the comforts of faith. The women have their worldviews challenged and slowly come to understand each other. There are even themes of feminism, how much education leads to being a “liberated” woman and what both women would have changed about their lives and marriages if they could. It’s the kind of story that’s been told a million times over, but in this case, the familiarity is what makes it work, including the portrayal of the characters.

Almost everyone has known someone like Brown’s Grace at some point: both somehow stubborn and ornery while also polite to a fault. Even her voice — the way she stammers or gives way to a short shout when uncomfortable or her flat, knowing tones — immediately brings to mind a grandmother or elderly neighbor. Bechtler’s character feels in some ways like her character in “Greetings.” She appears more upbeat. She’s the trademark atheist of the show, and her main argument for her lack of belief is the loss of a loved one at a young age due to a car accident. But in Gloria, she has more of a chance to show a fully fleshed out character and a wider range of emotions. She blends Gloria’s forcefulness, her introspection, her hopeless rage and her kindness to create someone too complicated to be fiction.

Although the show is done fully within the confines of Grace’s home and her relationship with Gloria, there are external factors that fill out the world. Grace’s grandson Roy, who occasionally helps her out and checks on her but charges her to do so, is mentioned frequently but never seen. When the lights go down between scenes, we do see a man moving scenes around to prepare for the next scene and, while it might not be intentional, it’s easy to imagine its Roy, checking in quickly and putting in an effort to help out before going back to his life. Laura Ellis’ sound design also stars as the antagonistic sounds of construction happening outside the cottage, reminding us of the heartless developer who has swindled Grace out of her land and her orchard in her last days.

The orchard is another important theme, though it’s never seen except through Grace’s knitting. Over the course of the show, Grace knits a sweater for her 13-year-old great-niece, Luanne, who she’s never met but who writes to her, fascinated by her oldest living relative. The sweater is an interesting part of the show, because of a promotional raffle that Bunbury hosts throughout its run. Audience members can actually enter to win the sweater knit by the character and the winner will be drawn after the last performance.

“Grace and Glorie” may be intended as a tearjerker with occasional moments of comedy through characterization, and there are members of the audience who get a little choked up at the heavier parts. But it’s graciously (pardon the pun) less emotionally manipulative in that way than many stories in the genre. Although the audience can tell it’s coming soon, the show doesn’t end with Grace dying. Instead it ends with a further conversation between Grace and Gloria about the meaning of life, comparing each person to a stitch on a sweater, meant to hold on to each other to uphold the whole. And that’s what this show does best, connection and reflection. Any tearjerker moments come as a result of caring about that.