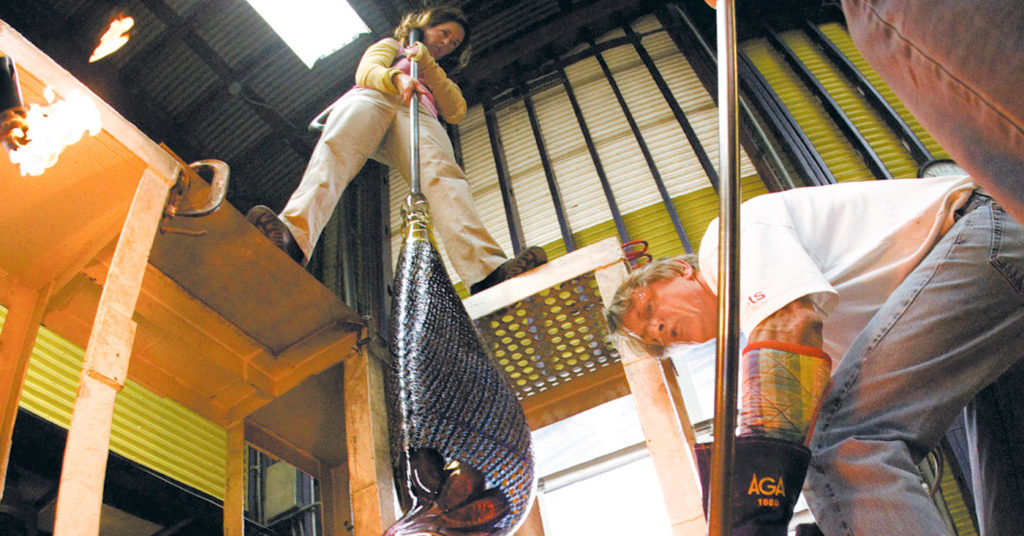 “If I were known for anything, I would hope it would be for the color, the color choices, and what the color does,” said world-renowned glass artist Stephen Rolfe Powell. If we go by the reactions to his death on March 16 at 67 years old, then the “Godfather of Kentucky Glass” will be remembered for much more.

Although Powell taught at Centre College in Danville, Kentucky, his presence looms large in Louisville. That’s in part due to his former assistants who live here, such as Brook F. White Jr., owner of Flame Run; Ché Rhodes, head of UofL’s glass program; DH McNabb; John Stokes and Paul Nelson, just to name a few.

Glassblowers need a team to create, especially with pieces as large as Powell’s art. One of Powell’s gifts was being a good team leader of his glass crews. He acknowledged their roles in creating his art — and they all have their “Steve stories.”

White said he spent more than a decade as an assistant, starting at 19 years old. “I learned how to be a professional. Steve was like a big brother/father figure to us all. He was bigger than life sometimes, demanding, a hard worker. We had fun with him and we are as close as family.”

Rhodes also spoke of the bond. “We can all feel special simply for the fact that he let us into his life. The most elite club I could ever hope to be a member of.”

Powell was born in Birmingham, Alabama, in 1951. He received his bachelors of arts in painting and ceramics from Centre College in 1974 and a masters of fine arts in ceramics from Louisiana State University in 1983. LSU is where he first began working with glass.

His two careers — professor of art and world-renowned artist — joined paths when he was hired to teach ceramics and sculpture at Centre in 1983. He founded the glass program there two years later.

Powell’s signature glass vessels incorporate colorful Italian murrini beads. People took notice of his work, with their saucy three-word titles, beginning in 1990 at a Glass Art Society annual conference. The series evolved, from Teasers and Whackos to Screamers, Echoes and Zoomers. The shapes changed but not the abundant color.

An early highlight of his career was his 1998 exhibition at Venezia Aperto Vetro in Venice, Italy. One of his close friends was the Venetian master glassblower Lino Tagliapietra.

Teaching awards include back-to-back Kentucky Teacher of the Year in 1999 and 2000, the Acorn Award by the Kentucky Council on Post-Secondary Education in 2004 and the Distinguished Educator award from the James Renwick Alliance in Washington, D.C. in 2012.

Because of the size he worked in, watching his team work was an event, so much so that he was asked to demonstrate at the 2002 Winter Olympics in Salt Lake City, Utah.

Powell had a mid-career retrospective exhibition and book reveal at KMAC Museum in 2007. The book, “Stephen Rolfe Powell: Glassmaker,” was published by University Press of Kentucky the same year. In 2010, he received the Governor’s Awards in the Arts.

Two public sites to see his art locally are the Speed Art Museum and KMAC Museum.

A memorial at Centre is tentatively planned for later this year. A memorial in Louisville is being discussed, but nothing definitive as we go to press.