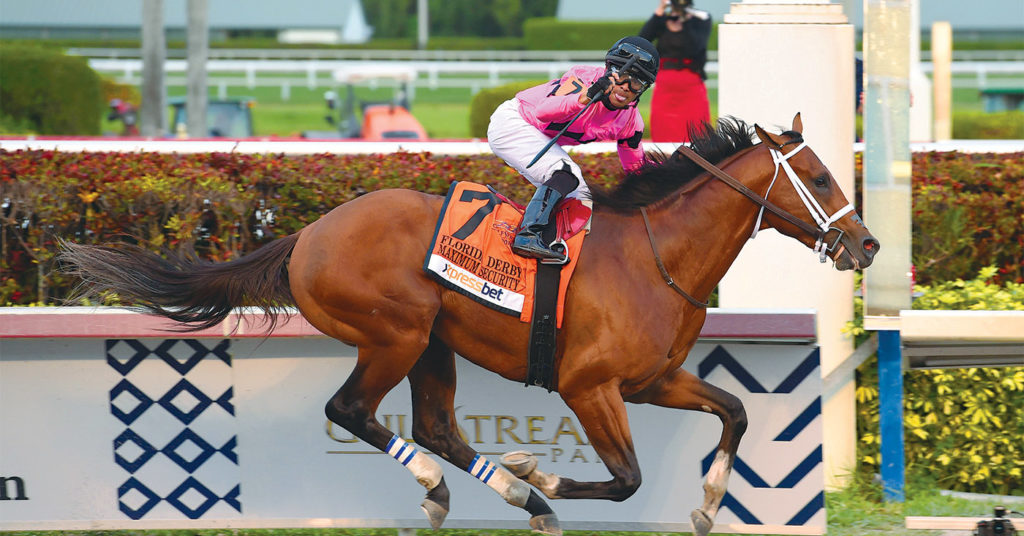 Maximum Security in the Florida Derby. | Photo by Leslie Martin.

How do horses get to the Kentucky Derby? Practice. And win enough prep races to have the points to qualify.

Every year, 20 horses strut their stuff from the paddock to the gate and wait for the call – “and they’re off!”

But how do they get there? Why these 20? Who’s in charge of dispensing the golden tickets?

The answer to that last question is, “Churchill Downs. It’s their race.”

In 2013, the track adopted its own point system, The Road to the Kentucky Derby, based on finishing in the money in a series of prep races around the country, and dispensed with the old system of basing entry strictly on a horse’s accumulated earnings.

“There was a feeling that some races carried big purses but weren’t legitimate Kentucky Derby preps,” said Jude Feld, an analyst on the Horse Racing Radio Network. “So owners and trainers would enter those weaker races and accumulate a lot of money, just so they’d be included in the Derby field.”

Some allege that Churchill Downs unfairly controls the new point system, giving points to races where they had relationships with the tracks or, in fact, outright owned them. For example, Churchill Downs owns Fair Grounds Race Track in New Orleans, which hosts the 100-point Louisiana Derby. It also owns Arlington Park in Chicago, among many other tracks.

Unfair or not, Feld feels the point system has proven to be pretty successful – favorites who performed well, a bunch of exciting races, and two Triple Crown winners.

Besides: “It’s their race.”

The Derby prep season begins the autumn before, with smaller-point races at Santa Anita, Belmont, Keeneland and Churchill Downs. Those races award 10 points to the winner, four points for second, two for third and one for fourth.

The Breeders’ Cup Juvenile in November, which was at Churchill Downs in 2018, is the first of the 20-point races (20-8-4-2). Horses race all through the winter, mostly for 10 points, until the 20-point Risen Star Stakes at The Fair Grounds in early February and, in March, the Fountain of Youth Stakes Preview at Gulfstream Park in Tampa.

There are 46 of these races in all, 35 in the U.S. But the avenue to the Derby really opens up in early March with the “Special Six” – six major stakes races that pay 100 points to the winners and pretty much guarantee a slot in Churchill’s starting gate. They’re also the horses that handicappers really pay attention to, because the fields are strong and the 3-year-old horses are maturing and rounding into Derby shape.

The Louisiana Derby, March 23 at The Fairgrounds. War of Will was the morning’s odds-on favorite at 4-5. But a 22-1 shot, By My Standards, won the 100 points. Others in the money were Spinoff (a Todd Pletcher horse) and Sueno (a Keith Desormeaux horse). War of Will finished ninth.

The Florida Derby, March 30 at Gulfstream Park. Maximum Security entered everybody’s consciousness with this win. Partly overlooked was the second-place showing of Bodexpress, who went off at 71-1. Code of Honor, the Shug McGaughey horse, was third.

The Wood Memorial, April 6 at Aqueduct in New York: Tacitus, the 5-2 favorite won, with Tax, a 5-1 shot, second, and Haikal, a 3-1 pick, finishing third. The Trifecta paid only $33.25, but the three owners gained Derby viability.

Only six horses participated in this field, and Roadster earned his trip to Louisville with a win. But that meant morning favorite Game Winner didn’t (though the horse finished second and will be in the Derby, as well). Instagrand, another pre-race favorite, ran third. This was the race last year that solidified Justify’s place in oddsmakers’ oddsmaking.

Arkansas Derby, April 13 at Oaklawn Park in Hot Springs. Baffert entered Improbable, the third horse in his troika, in the Arkansas Derby, only to see the horse finish second, to Omaha Beach. Country House was third. Seventeen horses have won a Triple Crown race after winning this last qualifying race. And, speaking of Baffert, the Arkansas was American Pharoah’s last win of 2015 before his Derby win and Triple Crown, if that somehow influences your thinking.

And how many points does it take to qualify for Derby?

The answer is, as many as necessary to be one of the 18 biggest point winners of the year. There’s no entry bar — you just have to have more points than the other horses.

But aren’t there 20 horses in a full Derby field. You are correct!

The other two entries are invited, one from the Japanese division and one from the European division – if you’ve wondered why there always seems to be a Japanese horse in the field.

Now, do you feel you have enough information to make your bets? Of course not. You haven’t analyzed the charts, reviewed all the videotapes of past races and watched the Derby horses work out on the track. But the professional handicappers have.

And next week, we’ll tell you how they are seeing the race shape up with just a few days before the bugler’s call.