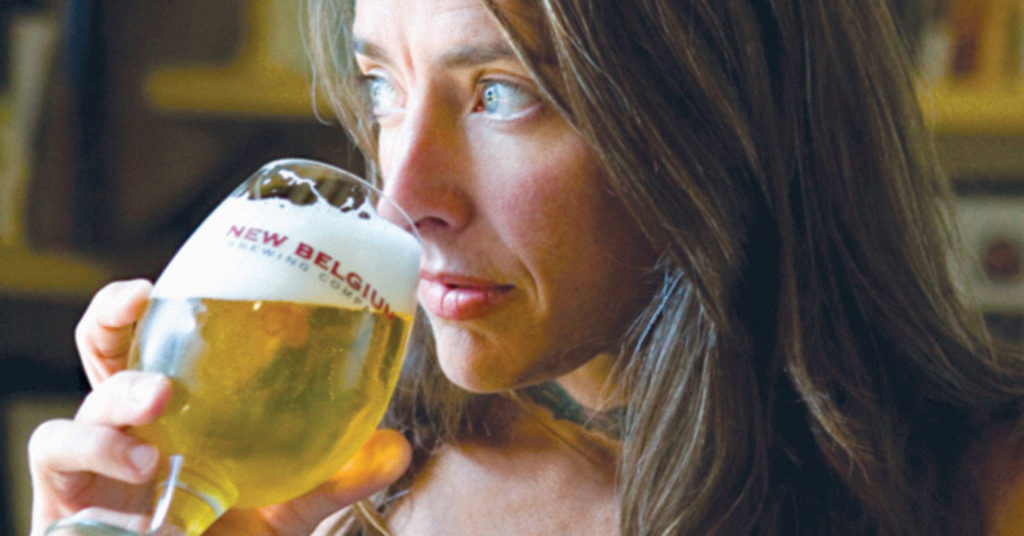 Fans of sour beer won’t want to miss three events over two nights this month that Louisville Beer Store, Holy Grale and Gralehaus have lined up.

Lauren Limbach — New Belgium Brewing Co.’s Master Blender and Wood Cellar Director and Imbibe Magazine’s 2016 Beer Person of the Year —  is visiting these three establishments to offer tastings of some rare and specialty beers. These are beers that are typically released or served at only New Belgium’s brewery in Fort  Collins, Colorado.

Limbach is a pioneer in the evolution of sour beer making in the United States. She started New Belgium’s sour program over two decades ago.

Lori Beck and Tyler Trotter, owners of Louisville Beer Store, Holy Grale and Gralehaus, credit Limbach for being one of the main forces behind the innovation and progress of the American craft beer scene and for propelling wood aged, mixed-culture sour beer into the mainstream.

“Tyler and I’s first American sour beer was La Folie and our minds were blown,” Beck said. “We sought out any of the Lips of Faith series beers we could when traveling and became huge admirers of what Lauren was doing at New Belgium. This is one of the most significant events we have ever hosted.”

Her visit is kind of a big deal.

Limbach visits breweries and blenders all over the United States, but this is her first visit to the Bluegrass.

“I lured her here with bourbon,” joked Brittney Donohue, New Belgium’s Kentucky market manager. Donohue believes there’s a lot of congruency in what New Belgium does with its wood-aged sour beer program and what Kentucky does with bourbon.

Donohue said she looks forward to showing off the region to Limbach.

“I’m excited for her to see the expertise behind Kentucky bourbon but also how it has shaped our community in the process. Although I’m an employee-owner at New Belgium … I’m a Kentuckian, and Louisville is home! I love being able to show our city off and watch as newcomers discover how truly special this place is.”

One of the many special offerings at the New Belgium tastings in Louisville is a beer that was a product of a dream that Limbach had while on vacation in Cozumel, Mexico — My Nirvana. Upon waking from a dream, she scribbled down everything she could remember from the imagery, and the beer was born. My Nirvana is a golden sour infused with a unique fruit called Buddha’s Hand, known for a very citrusy yet sweet taste.

On Friday, April 26, a ticketed event, The Evolution of Oscar: An Evening with Lauren Limbach, is at Gralehaus at 1001 Baxter Ave. from 6 to 7:30 p.m. This limited-seating event costs $25 and will allow attendees to follow the journey of Oscar, New Belgium’s dark sour ale aged in oak foeders as Limbach describes each of the beers and how Oscar plays a vital role in their development. The ticket includes five, 5-ounce pours, light snacks and commemorative New Belgium stemmed glass.

Sour Soirée with Lauren Limbach, another free event, is at 8 p.m. at Holy Grale at 1034 Bardstown Road immediately after the Gralehaus event. However, New Belgium’s specialty beers will be available at Holy Grale for public consumption beginning at 4 p.m.

Beck urged Louisville beer lovers to visit at least one of these events. “If you want to drink rare, exciting and well-executed sour beers and maybe learn something new — this is an opportunity that cannot be missed.”

Goodwood defends allowing bevin fundraiser
After The Kentucky Gazette tweeted recently that Goodwood Brewing Co. owner Ted Mitzlaff was co-hosting a fundraiser for Republican Gov. Matt Bevin, some in the Twittersphere and on Facebook were outraged and pledged to boycott his business. Mitzlaff had denied that he hosted the event and said the brewery rented the space to the Bevin campaign. (A Bevin spokesperson did not return a request for comment.)

Here are high points from an email exchange he had with LEO.

On why the fundraising event was held at Goodwood:
“I am friends with all of the sponsors and was asked if they could have the event at Goodwood in our event space. I certainly agreed as events generate revenues, we expose our brand to new patrons and can meet and discuss politics with those making policies. As a member of the KY Guild [of Brewers] legislative committee, it is important for me to have relationships with everyone in Frankfort. Gov Bevin and my wife (Elizabeth) were classmates at [Washington and Lee] University … ”

On whether Goodwood or Mitzlaff hosted the fundraiser:
“The space was rented. Goodwood did not host the fundraiser. Goodwood as a company does not endorse candidates. Our diverse group of employees, investors and patrons are free to endorse whomever they choose. Our event space is regularly used for fundraisers of all kinds, business meetings, socials, alumni events, rehearsal dinners, weddings, private parties, radio broadcasts, etc.”

On whether community pushback has affected whether Goodwood will use its space for political events in the future:
“Goodwood does not discriminate on any grounds, including but not limited to race, religion, sexual orientation or political affiliation. We allow anyone to rent our event space or visit our Taproom provided they are not breaking any laws. Goodwood fosters an atmosphere where ideas may be respectfully expressed and debated, whether we are in agreement or not. We believe strongly in the First Amendment, as well as diversity of thought.”

On Insider Louisville’s story that said “he would be happy” if Democratic gubernatorial candidate Adam Edelen or Bevin won:
“I am a member of the KY Guild of Brewer’s (KGB) Legislative Committee. We are committed to working with all elected members of the state House, Senate and Governor’s Office to promote legislation that is beneficial to Kentucky breweries and our patrons. We work with individuals on both sides of the aisle.”

On the Insider Louisville story that showed he gave some $700 to two Republican candidates and a GOP group since 2015 but didn’t list his previous $1,250 in donations to Democratic candidates Neville Blakemore, who ran for state treasurer, and Mayor Greg Fischer. (Of $2,994 in total donations Mitzlaff has made since 2005, $1,250 has gone to Democrats, state records show):
“Neville Blakemore and I have been friends since high school, and we attend the same church. Neville Blakemore, Greg Fischer, Matt Bevin and I were all members of a Kentucky/Southern Indiana business organization and were friends long before they entered politics. … I don’t vote or contribute on straight-party tickets and, as you can see, I am not a big donor. I am just a business owner trying to provide for my employees, produce great products and do what I can to help other Kentucky breweries and businesses.” •