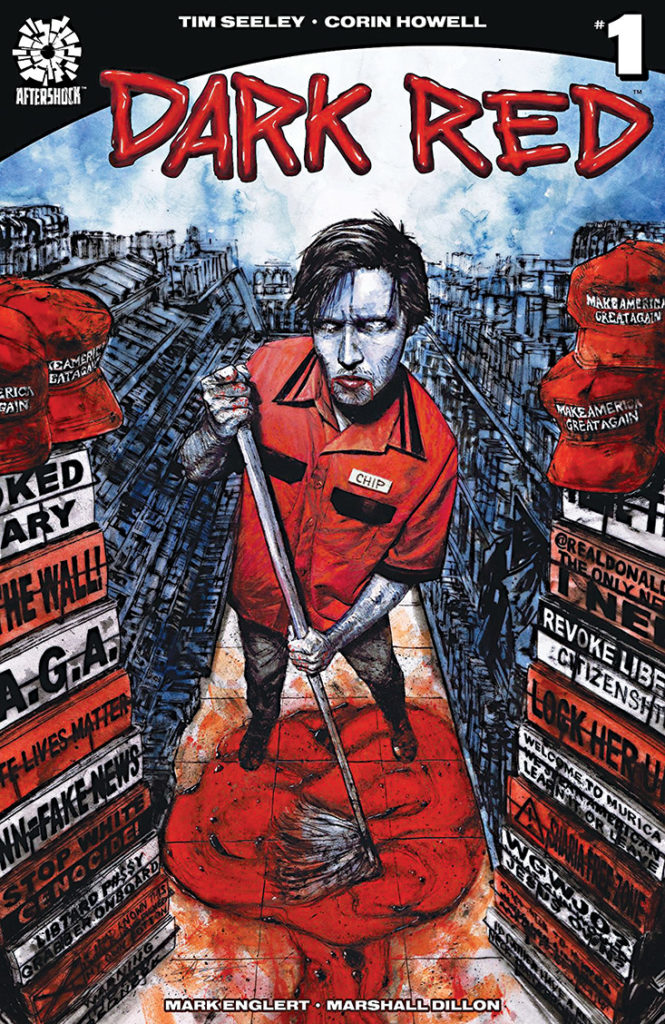 Chip, an unassuming young man, is mopping the floor while working the night shift at the local convenience store in a small, rural town. Drunk customers come in and out and give him a hard time, and he does his best to avoid getting into a fight. On this night, one of them throws up on his clean floor, prompting the manager to tell him he has to stay late and clean it up. He tells her he can’t, but he’s given no choice. The next thing we see is him racing the sun to get home.

Thus opens Aftershock Comics’ new title “Dark Red.” The short time he’s in the sun makes his skin sizzle and smoke, and so, obviously, Chip is a vampire. Interesting things start to happen, and by the end of issue No. 1, he’s told he is the “savior of the vampire race.” One look at the cover tells you this, so I don’t feel bad spoiling that tidbit. Being a fan of supernatural stories, I couldn’t pass this one up. If that is also something that appeals to you, this story by Tim Seeley, with art by Corin Howell should be right up your alley! 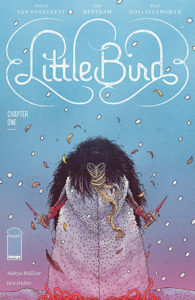 The U.S. has fallen to anti-science radicalism, and Little Bird must free the Axe to lead the Canadian resistance. All alone in the wilderness, Little Bird will stop at nothing to find the key to avenging her people.

“Little Bird” is a story that, through macabre, detailed illustrations, blends the surrealism of “Akira” with the world-building scope of “Fallout” to tell a story that is tragic and heartfelt. It opens with our protagonist’s life turned to ash by an unseen battle, and she is given the mission of finding the last bit of hope that exists for her lands.

Each page is lush with hyper-realistic illustrations. The rural culture that Little Bird comes from is in contrast to that of the grotesque modernism of the United Nations of America, which is home to places such as the Northern Guard Penitentiary for Genetically Modified Beings. Alongside the technology introduced to us, color plays a huge part in distinguishing the countries from each other, with the earthy blues of Little Bird’s world opposite that of the vibrant pastels.

The creative team of Dary Van Poelgeest and Ian Bertram has brought to the stands a refreshing take on the story of “The Chosen One,” and I am look forward to the rest of the journey of Little Bird and the Axe.