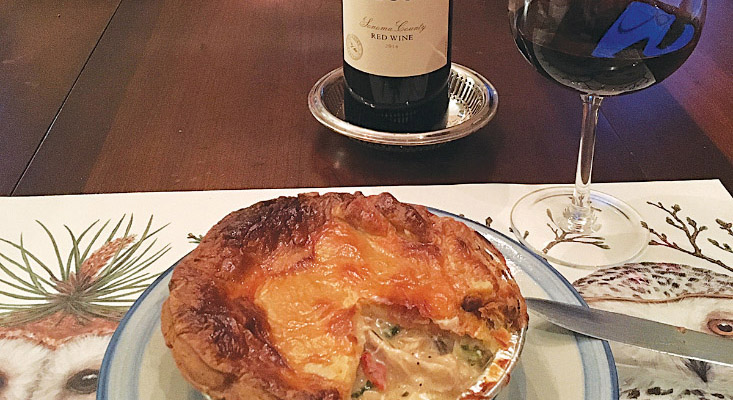 Sing a song of sixpence,
A pocket full of rye;
Four and twenty blackbirds,
Baked in pie.
When the pie was opened,
The birds began to sing;
Was that not a dainty dish,
To set before the king?

Cooks have been filling pastry dough with savory and sweet ingredients for centuries. The famous Cornish pasty, consisting of cubed beef and root vegetables wrapped in dough and baked, supposedly had its origin as a handheld lunch that men working in Cornwall’s tin mines could take for lunch. Empanada, which in Spanish means “covered with bread” (though short crust pastry is more often used, is a staple of cuisine throughout Latin America).

Other pies are meant to serve more than one person. The British love their meat pies, including steak and kidney (yes, it’s an acquired taste) and fish pie. One especially notable variation on the latter is a dish called stargazy pie, in which the heads of small whole fish (sardines or herring) stick up out of the edge of the crust in a ring. Of course, we Americans, especially in the South, enjoy our fruit-filled pies — apple, peach, cherry, blueberry — as well as pies with other sweet fillings, from pecans to chocolate to coconut.

In short, a pie can be made with pretty much anything that can be encased in dough and baked.  And that leads to an interesting idea about where the term “pie” came from.

It may be a shortening of “magpie.” This is not because, like the nursery rhyme blackbirds, they were cooked in pastry (they were not), but because magpies are known to collect a variety of odds and ends to use in decorating their nests. Similarly, a wide assortment of ingredients is appropriate for pie fillings.

A savory American classic is the chicken pot pie, which can be found in outlets as varied as the grocery store freezer case or KFC.  Happily, Louisville is the home of what, to my palate, is the ne plus ultra of the dish, the chicken pot pie created by chef Kathy Cary, the owner of Lilly’s: A Kentucky Bistro on Bardstown Road (and the Kentucky chef most often nominated for the James Beard Awards) has been making her pot pie for years. It has even been featured on the cover of Bon Appétit.

As is appropriate for classic, cold weather comfort food, it appears on the Lilly’s lunch menu from Labor Day until early April. If you happen to be in the know, you might score a pot pie at dinner. On a recent Saturday night, an 8-year-old diner very much wanted that dish for his dinner and was disappointed not to see it on the menu. Cary, thrilled to have her chicken pot pie so beloved by such a young gourmet, was happy to serve him one.

You can also purchase individual pies to take home from Le Peche, Cary’s gourmet-to-go shop next door to the restaurant. (But, call ahead to me sure there are some in the display case. They sell out quickly.) If you are having a party and don’t want to cook, you can even order aluminum pans of the pot pie to heat in your oven and serve to a crowd.

So, what about this pot pie distinguishes it from all the runners-up? Flavor. As she does in all of her restaurant’s dishes, Cary uses top-flight ingredients. Large pieces of tender, Amish-raised, white meat chicken are plentiful. The vegetables populating the pie are green beans, chopped onions, sliced shiitake mushrooms and strips of red bell pepper.

Chicken and vegetables are bathed in a savory cream sauce, which also contains the ingredient that makes this chicken pot pie so especially toothsome — fresh rosemary. This adds an herbal bouquet that sets the dish apart. It’s tantalizingly aromatic without being overwhelming.

Of course, what makes this a pie, not just creamy chicken stew, is that the ingredients are baked in an equally excellent crust. Here, Cary’s secret ingredient is cream cheese, which she blends with the flour and butter and salt to make a decadently rich pastry.

Finally, and certainly not least, is that Cary makes every one of the pot pies herself. Because of their popularity, she has toyed with the idea of contracting with a commercial kitchen to make them. But, she hasn’t gone that route. Yet.

If you bring home Cary’s chicken pot pie for a meal, pair it with a good red wine. You might think white would be the natural choice, given chicken is the meat. But the pot pie is so rich and so savory that a red is better.

One of my favorite wines to drink with it is Decoy Sonoma County Red. It’s part of the famed Duckhorn Wine Company’s portfolio and very reasonably priced at about $20 a bottle in local stores. (It has a mallard duck decoy on the label, which you may notice makes this the fourth bird to appear in this column.)

Whatever you choose to pair with Kathy Cary’s chicken pot pie, it is certainly fit to be “set before a king.” Or an appreciative 8-year-old.