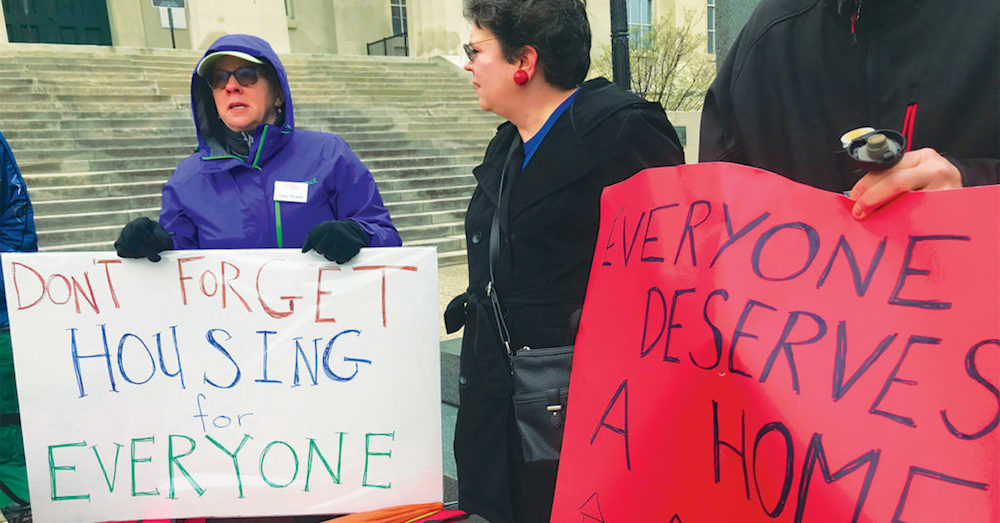 Demonstrators for the St. John Center for Homeless Men’s ‘Vigil for a Just Budget.’ | Photo by Danielle Grady..

[Ed. Note: Mayor Greg Fischer’s plan for the budget has been released, detailing $25 million in cuts instead of the expected $35 million. Public safety took a smaller percentage of cuts than most government functions, according to a news release. Fischer is calling for the closure of one firehouse on Grade Lane, one fewer ambulance and 17 fewer school resource officers in Jefferson County Public Schools. The June Louisville Metro Police Department recruit class is still canceled, but the administration wants to start two in July. In total, there will be a net reduction of 40 uniformed officers. Fischer told the council that he considers public safety to go beyond police, fire, EMS and corrections and that it extends to public health, safe and healthy neighborhoods, libraries, parks and community centers. Still, he’s proposed the closure of two libraries and a neighborhood center in Middletown, and he wants to cut funding by 18 percent to the Office for Safe & Healthy Neighborhoods, which employs “violence interrupters” to mediate potentially deadly conflicts in high crime neighborhoods.]

Council members say preserving public safety is the No. 1 priority for the city when considering budget cuts. But what is public safety anyway?

“I think many people agree that government’s job, first, is to provide for basic health and safety of its residents or citizens,” Price said one morning last week as she and some 10 others demonstrated outside of Metro Hall to remind the city that the budget should provide for everyone, the homeless and the poor included. “The community is safer and healthier when people have decent, safe, affordable housing. And housing is a solution to homelessness.”

For some council members, however, public safety means police, fire, emergency medical services, corrections and little else. To others, it’s bigger than that, just like it is to Price. It’s money for the Office for Safe and Healthy Neighborhoods, which employs community violence interrupters to mediate potentially deadly conflicts. It can even be community centers, libraries and public pools, which provide safe spaces for families.

With $35 million in cuts expected in Mayor Greg Fischer’s budget proposal on Thursday, April 25, which “public safety” items will take priority? After receiving the mayor’s spending plan, the council will hold hearings and vote on its version before the 2019-20 budget takes effect July 1.

So far, no clear plan has emerged from the council, including from the Democrats and Republicans who voted down Fischer’s proposal to avoid budget cuts with an insurance premium tax increase. The only sign of consensus seems to be on preserving police, fire, EMS and corrections, although that, too, appears to be vulnerable.

“Given the size of the budget gap, I don’t think there can be any sacred cows that should not be considered for reduced funding as we try to balance available revenue with expenses in next year’s budget,” Councilman Bill Hollander, D-9, said in an email to LEO. He voted for the tax hike.

Councilwoman Jessica Green, D-1, chair of the Public Safety Committee, voted “no” on Fischer’s tax increase and has been clear that public safety should be protected.

For Green, public safety includes violence interrupters and community centers, as well as police, fire and EMS. Reached on April 18 by LEO, however, she said those areas also may be reduced. “The reality is: We’re in a position where there may have to be some cuts,” she said.

“I don’t know at this point,” she said. “We’ve not dug deep enough in the budget to do that.”

Green said she doesn’t want to cut areas that are proven through data to save lives. She believes that the work of police and the work of the Office for Safe and Healthy Neighborhoods function hand-in-hand, and she wants to make sure that can keep operating and hiring, cuts or no.

Councilwoman Barbara Sexton Smith, D-4, voted for the tax increase. She said she also believes public safety includes more than police, fire, EMS and corrections, but she warned against broadening the definition too much. “I’ve been hearing folks talk about it in much more expanded terms than we are used to talking about it,” she said.

If you say everything is public safety, particularly the pools, libraries and parks, then you “lock down the conversation,” she said. “And it, what it does, it sets up a scenario for people to dance around the real issue.”

The conversation about public safety first needs to focus on police, fire, EMS and corrections, she said. After that, other programs can be considered. Councilman Anthony Piagentini, R-19, said that those are the only services that should be considered public safety. He voted against the tax increase. “I understand that they want to broaden [public safety] to a wider definition, but the basics are police, fire, EMS,” he said. “Without that, there would be a mass exodus in the city.”

That doesn’t mean he isn’t interested in making changes to those departments. As the vice chair of the council’s efficiency committee, he’s exploring the idea of merging fire and EMS, a move that he said could save the city a couple million dollars without reducing services.

As far as the areas that other council members consider public safety, Piagentini said he thinks the violence interrupter program needs to go, but he believes there’s a place for programs such as homelessness services. His district is in the far East End.

“It’s an issue that’s very complicated and needs to be addressed,” he said. “But again, if we’re going to be hyper-clear here, there does have to be a hierarchy of priority.”

Natalie Harris, executive director of the Coalition for the Homeless, said she couldn’t imagine how the council could consider the city’s shelters and its mobile needle exchange unit anything but equal to police and other emergency services.

“I mean, we’re talking about the things that actually stand between someone living and dying,” she said.