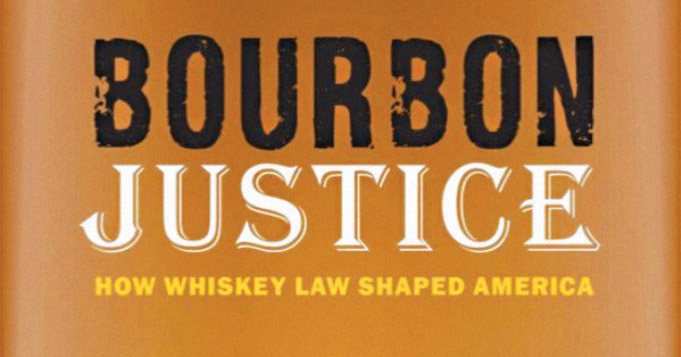 As spirits writer Fred Minnick put so well in his forward to this intriguing new book of bourbon history, “… [W]hen business titans expand, create value, and innovate, they eventually sue one another.” Over the course of the last 200 years of American history, that is exactly what happened with the titans (as well as the little players) of the bourbon industry. The court cases that ensued, clearly and concisely recounted by Louisville attorney and bourbon blogger Brian Haara, offer a fascinating perspective on how whiskey played a major role in shaping American consumer protection and trademark laws, among others. Even if you are a teetotaler, bourbon litigation has had an important impact on your life.

For example, the entire concept of a “brand” stems from bourbon. Haara writes, “Beginning in the 1800s, federal law required that, ‘the name of the distiller shall be stamped or burned upon the head of every package of distilled spirits put into bonded warehouses, and this must not be erased until the package is empty.’ The phrase brand name was born from this federal law and the branding of barrels by distillers and then it spread to other manufactured good.”

As Minnick alluded, protecting their brands became a major source of lawsuits among the bourbon titans. Haara recounts several cases of distillers suing one another over brand names when distilleries changed owners or moved operations. A lawsuit in 1881 involving Old Crow (Pepper v. Labrot) was one prominent example. More than a century later, in 2009, Maker’s Mark took Diageo to court claiming that when the latter used “a red free-form, wax-like seal cap” on one of its tequila brand bottles it was a violation of Maker’s Mark’s famous (and trademarked) red wax-dipped bottle.  The bourbon maker won Maker’s Mark Distillery, Inc. v. Diageo North America Inc. and the court ordered Diageo to pay Maker’s Mark’s legal expenses resulting from the case. The ruling was appealed, but upheld.

In the 19th century, you might buy a bottle of spirits labeled “bourbon” or “rye” but that was not necessarily what you’d be getting. In fact, there were some products that contained no corn-based liquor at all and even some that contained deadly ingredients. “… In 1853 Pierre Lacour published The Manufacture of Liquors, Wines and Cordials without the Aid of Distillation, which contained a recipe for ‘Old Bourbon Whiskey’ that blended neutral spirits simple syrup, tea, oil of wintergreen, tincture of cochineal (a bug that when crushed provided coloring) and burnt sugar. … There was also the dirty underbelly of rectifiers who used hazardous additives, including sulfuric acid.”

This was perfectly legal. It seems unthinkable today, but there was no law or regulation to prevent such products being labeled “… bourbon, whisky, or even pure.”

Enter Frankfort, Kentucky distiller Col. E.H. Taylor, Jr. who was concerned about protecting the reputation of his whiskey, as well as the whiskeys of other reputable bourbon distillers. He enlisted the aid of John G. Carlisle who was the U.S. Treasury secretary and also, fortunately, a former U.S. congressman and senator from Kentucky, so he would understand a thing or two about bourbon. What they proposed become the Bottled-in-Bond Act of 1897, “… designed to protect the public, to give assurances about the actual distiller of the spirits.”

The law specified that in order to be labeled a bottled-in-bond whiskey (bourbon, rye or any other American whiskey), it had to be a product distilled at a single distillery by a single distiller. In other words, there could be no sourcing of spirits from other places. There also could be no mingling of spirits from one producer if they had not been produced within the same distilling season (which is six months). Nothing (such as aforementioned tea or sulfuric acid) could be added to alter the whiskey and it had to be aged in a federal government bonded (taxed) warehouse (under lock and key) for a minimum of four years. Finally, the whiskey must be bottled at 100 proof.

Furthermore, an engraved tax stamp would be used to seal the bottle upon which, according to the act, was given “the proof of the spirits, the registered distillery number, the State and district in which the distillery is located, the real name of the actual bona fide distiller, the year and distilling season, whether spring or fall, of original inspection or entry into bond, and the date of bottling.”

Not only would this now be a government guarantee that the liquid in the bottle was actually whiskey, but the Bottled-in-Bond Act was the very first federal consumer protection law in the United States. Others, such as the Pure Food and Drug Act followed, also the result of whiskey litigation.

Haara also covers the legal history of defining “bourbon” and “whiskey” and making bourbon a distinctly American product. In all, he cites 120 cases and 22 statutes and regulations involved in the history of bourbon. This admirable book will be a valuable addition for any whiskey enthusiast, but it will also be a fine read for anyone with a serious interest in American history. •