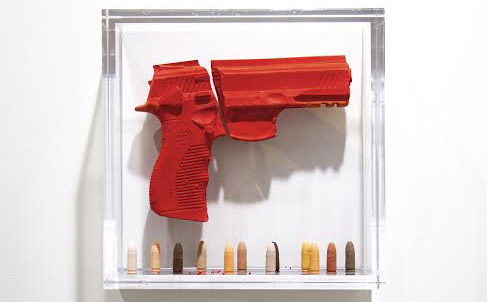 A detail of 'box of crayons no. 6' by Waller Austin. Crayon, birch, enamel, crylux and zinc.

Artist Waller Austin’s wife Whitney survived being shot multiple times during the Sept. 6, 2018 mass shooting at the Fifth Third Bank headquarters in Cincinnati. The tragedy has influenced Austin’s art. In his first show following the shooting, Austin wanted to “share a terrifyingly visceral experience to enable conversation and amplify my concern about gun violence.” We spoke with Austin about how his art changed after the shooting, the medium in which he works and the artists that he admires.

LEO: Your wife Whitney was shot multiple times last year. How is creating art helping you deal as she recovers? How has it changed since the shooting?
Waller Austin: Over the summer of 2018, I had been working on a show scheduled to open 16 days after Whitney was shot. Almost immediately, I felt a responsibility to cancel and reimagine the show in response to our unique situation. I wanted to share a terrifyingly visceral experience to enable conversation and amplify my concern about gun violence in our community. The newly imagined title for the show became ‘negligence.’ The term implicates us all, while assigning no blame — it is a declaration of apathy. The day we returned from the hospital, my studio became a crayon gun production factory. Producing the work kept me busy and gave me some return to normalcy. One month later, I launched the active art installation. [It] displayed a colossal, arrested installation of 152 partially uncrated paintings, two life-size casts of my nude body and 29 colorful replicas of the Taurus model 809 and 9 mm bullets used by the shooter at Fountain Square, all cast of melted crayons. In total, a collection of 54 vibrantly colored crayon guns and more than 10,000 flesh-tone crayon bullets were produced and are currently being sold to raise money for the Whitney/Strong Organization. If you are interested in reducing gun violence, please consider donating to Whitney/Strong Organization (whitneystrong.org/support).

You work in an unusual, yet common, medium. Please explain how you create your art.
In 2014l, at the age of 33, I went back to school to study painting and art history at the School of the Art Institute of Chicago. At the time, I fancied myself as a painter committed to acrylic and oil media, for no good reason. After many late nights and long months of painting with toxic solvents, … I needed to find a medium that was not poison. Should I mix my own paint, or should I rely on advances of the paint industry to supply a consistent product for me to smear? Crayola crayon is my solution. It’s an incredibly vibrant, inexpensive, malleable substance with both palpable and superficial properties. It’s non-toxic; kids can eat crayons, although I do not endorse the nutritional value. Whenever I open a box of crayons, the smell nourishes me as if I were sipping from a fountain of youth. Crayons catalyze a nostalgic phenomenon for older audiences and flatten high and low art, providing understandable access to a younger audience. Creating the art is simple; I remove the wax from the label, then melt, mix, pour and burnish paintings and cast sculptures from 100% pure Crayola crayon. The resulting works occupy a place in the art historical canons of encaustic painting and wax sculpture.

What is your earliest childhood memory that involved art?
Art served my mother well as a diversionary parenting tactic, but my compulsion to make it was ultimately borne from this cathartic exercise. It was my poor behavior and subsequent solitary confinement that catalyzed my early skill for creating art. I also broke a lot of bones growing up as a rough-and-tumble kid (the third of four boys) and would make art when I could not be physically active with my brothers. At home, there was art-making every day. Mom will make no claim to artistic skill or talent, but she is intuitive, craft-savvy and productive. From day one, I was learning how to become, or what grown creatures like me are to do, by watching big kids make art.

What do you want to do that you haven’t done?
Fashion! I am completely ignorant to all things fashion — maybe it’s time to antagonize that deficiency.

Who are some of the artists you admire and why?
Themes in my work include narcissism and self-abasement, labor and leisure, superficiality and sincerity, indulgence and restraint, maximalism and reduction. There is no shortage of artists who have produced unbelievable artworks within these parameters. I look at a lot of dead artists work. I am always considering Marcel Duchamp’s ready-mades, Robert Rauschenberg’s combines and Ed and Nancy Kienholz’s tableaus. I am drawn to how artists like Eva Hesse, Piero Manzoni and Steven Parrino manipulated and represented their chosen media. I am interested in the subversive seriality in work from Elaine Sturtevant, Andy Warhol and Richard Prince. I am influenced by the reduction of Ellsworth Kelly and overindulgence of Mike Kelley. If I could become any artist, it would choose Paul McCarthy. His installations are cultural collisions presenting a most satisfyingly vulgar post-conceptual humor.