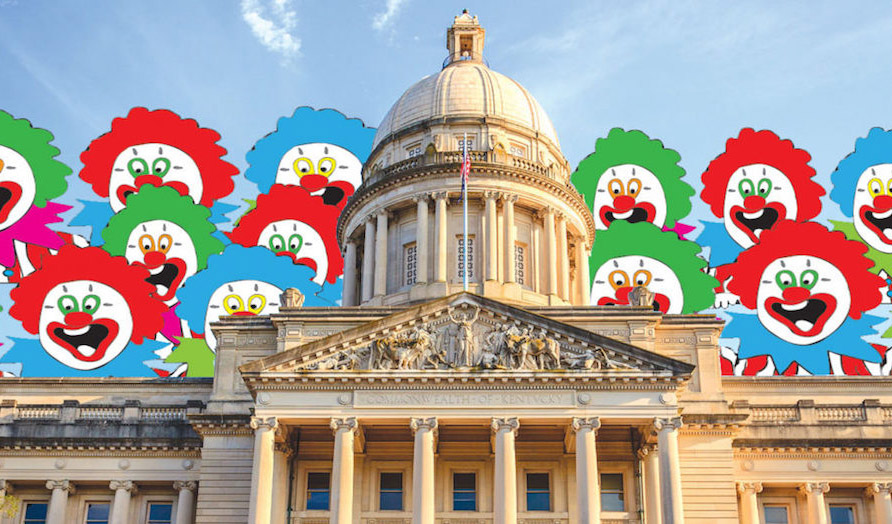 More than 200 bills were passed in the 30 days of this legislative session. Sure, some were about interstate medical licensure contracts and other topics that we’re almost too bored to type here, let alone tell you about. But others were infuriating or encouraging and noteworthy simply because they were not laws already. Here is a short list.

Social Push and Pull
For the most part, the legislature did its best to steer the state to a more “Handmaids Tale” future. It passed a bill to outlaw abortion after a heartbeat is detected, which is around six weeks. The move was largely anticipatory, as it’s likely to be ruled illegal. A federal judge has already temporarily halted it. The real question is whether the U.S. Supreme Court will re-examine Roe v. Wade now that it’s as conservative as Kentucky. Gov. Matt Bevin signed a bill that would make illegal all abortions the second the Supreme Court did so.

The General Assembly’s commitment to God, guns and country continued with a new bill to require public schools to prominently display the words “In God We Trust” in schools and another law allowing individuals to carry concealed firearms without a permit, training or background check.

When it comes to criminal justice reform, however, lawmakers went in the other direction and made it easier for felons to get their records expunged. More convicted individuals are eligible for the process now, thanks to an expanded list of Class D felonies that are open for expungement. The cost to file for a clear record also was dropped to $250 from $500.

In a wait-this-wasn’t-a-thing-already move, the legislature banned bestiality. Apparently, some agriculture advocates are still complaining about it, even though the bill contains protections for use of artificial insemination on livestock.

Free speech, or not?
The legislature passed a controversial bill that proponents say will protect free speech on college campuses. Public colleges must create rules restricting people from obstructing or interfering with speech that they disagree with. The ACLU says this could suppress counter-protesters. It also prevents colleges from canceling speakers based on their beliefs. The legislature may have had a certain incident in mind — say, when protesters disrupted a speech by alt-right provocateur Milo Yiannopoulos in 2017 at the University of California, Berkley.

Where the Sun don’t shine on Kentucky
And then there’s solar energy. Legislators have disincentivized the renewable energy by leaving it up to utility regulators to determine how much individuals generating it can get for selling excess power. The Courier Journal reported that utility companies spent about $320,000 in lobbying legislators this year, while a solar energy PAC only gave $6,500.