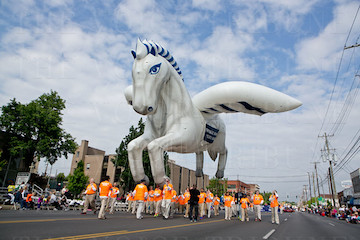 HappyTail Hour
Waterfront Park, Great Lawn
Pegasus Pin admission ($6-$7)  |  5-9 p.m.
Not only are dogs allowed at this drinking party, but they’re the main event (just don’t give them your gin and tonic). There will be cocktails aplenty to buy, as well as music from Electric Garden and Solar Flannel and food and games for you and your dog. Your pet must be on a leash. Admission is a little more than $5, but once you purchase a Pegasus Pin, you’ll be able to get into several Derby Fest-A-Ville events, including concerts and the Great Bed Races.

Republic Bank Pegasus Parade
Broadway (from Campbell to Ninth Streets)
Free  |  5 p.m.
After 63 years, the Pegasus Parade is almost as much of an establishment as Derby itself. This year, expect marching bands, horses, inflatables and many, many floats for this parade that lasts around two hours. The theme is “Pegasus Power,” and you’re encouraged to wear a superhero costume.

The Kentucky Cowhands
Nachbar
Free  |  7:45 p.m.
The Kentucky Cowhands are three good ol’ boys in cowboy shirts and hats, here to play you music. They stick to western swing, played with an upright bass, drums and a guitar with rockabilly sensibilities.

Rooftop Thurby Party w/ Otis Junior & The Jesse Lees
ALEX&NDER
No cover  |  8-10 p.m.
Celebrate Derby from above at this rooftop party at the swanky ALEX&ANDER cocktail bar. Otis Junior will perform his catchy soul alongside the full band, The Jesse Lees.

Gatsby Thurby Party
Monnik Beer Co.
$5 (advanced) |  8 p.m.-midnight
Nothing fits with the Derby’s spirit of excess quite like a 1920s themed party. Dress in period attire and participate in the decidedly 21st century practice of a silent disco, featuring headphones blasting different beats for you to dance along to.

Sherby
Sherwood Avenue
$5  |  3 p.m.-midnight
Sherwood Avenue is a pretty nondescript Highlands street: short, narrow and even narrower because of parked cars. But on Derby eve, it’s the center of the neighborhood. This yearly shindig, which started as a house party, is now a bumping affair — six bands, including Hot Brown Smackdown and Curio Key Club, a DJ, food trucks, featuring The Traveling Kitchen and the Louisville Dessert Truck, drinks and the iconic giant disco ball. It’s not all debauchery; this event benefits local charities.

Pirate Derby with Drunk & Sailor
The Bard’s Town
$5  |  8 p.m.
Would you rather ride a horse or a pirate ship? Pirate ships win every time, right? That’s why the Pirate Derby is a yearly tradition, hosted by the comedy duo Drunk & Sailor. Don your best pirate garb and swashbuckle down to The Bard’s Town for an evening of yo-hoing (singing pirate songs, of course). The show starts as an all-ages affair, but the performances get “progressively more adult as the night goes on” — although it’s up to you to decide when to yank the kiddos from the room.

Ducain / The Last Troubadour / Cutleaf Evening / ocean ear
Mag Bar
$5  |  9 p.m.-midnight
If you’d like some story with your music, The Last Troubadour (Cincinnati) and Ducain (Huntington, West Virginia) have got you covered. The two bands dabble in themes of love, betrayal, retribution and repentance, but they bring them to you with different genres: alternative rock and Americana, respectively. They’re joined by Louisville’s ocean ears (psychedelic rock ’n’ roll) and Cutleaf Evening (multi-genre rock).