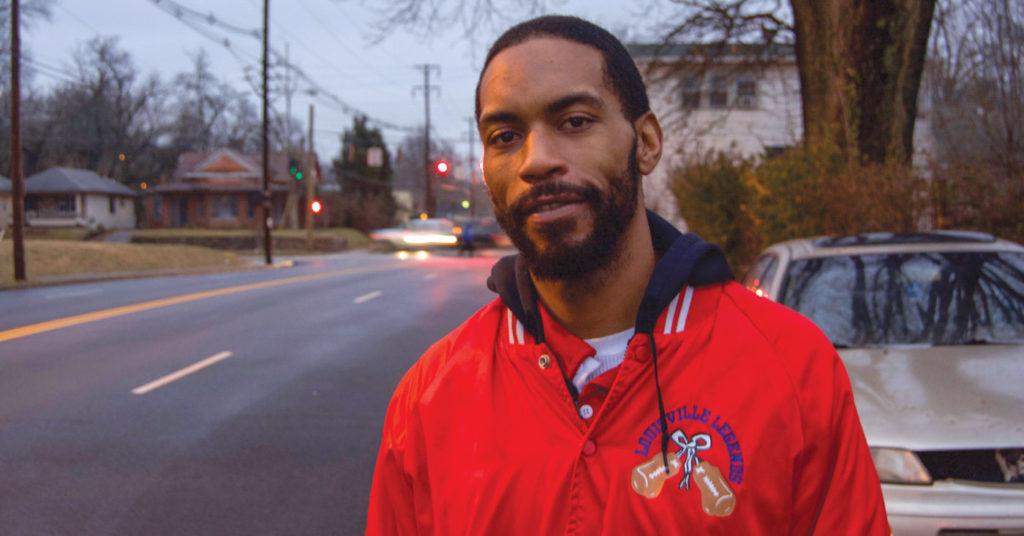 “I’ve been in The West End my whole life. I was born and raised here. We lived in California Square. When I was 6 or 7, we moved to 42nd. Yeah, I’ve been here my whole life.

Growing up in the West really ain’t as bad as people think it is. It depends on the people that you involve yourself around, and the people in your household. It’s a lot deeper than just the streets. The streets don’t turn people into monsters — people turn people into monsters. It’s who they go look to find leadership in, and who they feel like is giving them the most love at the time. It’s deeper than just your surroundings and where you live at. I feel like it’s the stuff on TV, the social media, the stuff that people are portraying is what’s the best. It’s making the youth turn into what they are. I feel like it’s a lot of different outlets that people could use if they really care. People say that they care about a person but don’t really feel the way that they say that they feel. They care more about what they could get out of the relationship instead of really helping a young person.

Ain’t nothing wrong with the streets of the West. I don’t feel like there’s anything wrong. I’ve lived here my whole life. My mom loves The West End. She’s been a respiratory therapist for 20-something years. She’s retired now and doing really well, and she still lives in the West. She enjoys being around the people that she’s around, not the streets.

I feel like they’re changing the streets, but they’re not changing the streets. Just ‘cause they’re putting down new pavement and putting up a YMCA, it’s not really going to be for the youth of The West End, you know, the people that they make look bad on the news. I feel like the government is putting everybody that they feel like is a problem in a certain situation anyway. If a person needs help, they’re going to put them around a lot of people who also need help, which makes a lot of bad shit happen. Even with the projects, they put people who needs assistance in a certain area. That’s going to create problems in that area because everybody needs help. Everybody is trying to come up on something. Everybody’s trying to come up on some money. Everybody’s trying to figure out how they’re going to feed their kids. A lot of negative stuff happens when you put anyone’s back against the wall. That’s how I feel.

It’s more than just gentrification that’s happening. It’s not just happening in West Louisville, but around the world. It’s happening on a high level. They raise the prices, around here, on everything. They do that on purpose to make who’s down stay down. It’s not just black people in the West End now. You can ride down the street and see just as many white people as you do black people. They need help, and when they go to the government for assistance, they’ll just put them down here. They’re hurting us, and they’re doing it on purpose. The majority of Section 8 houses is in The West End of Louisville. There’s a small percentage of Section 8 houses in different areas of this city beside maybe Newburg. Nobody who is upper class is out in these areas, where the majority is black people.

Hell yeah, gentrification is going on. I don’t use that as a crutch, nor do I think that anyone else should use it as a crutch, either. Like I said, when your back is against the wall, you’re gonna do whatever you gotta do to make your situation the best you can. So, even when the odds are against you, you can’t use that as a crutch or feel like you could have a bad life and just blame it on gentrification. Nah, you gotta change you. You gotta change what’s going on around you.

A lot of people aren’t as mentally strong as others, but a lot of people are out here in these streets, and those are the people who really need help, whether they fall victim to heroin, which is not only an epidemic. They’re giving people heroin. They give out heroin when someone breaks their leg, and they have to take Perc-10s. They’re giving them heroin when they break a leg and tell the people to take Lortab 5s. Then, once these people like how these narcotics make them feel, they wonder if it gets better.

Then, you got young teenagers out here, looking up to the wrong people and rap videos and dude that’s on the corner with the big rims on his car, that doesn’t work a job and hasn’t his whole life. They see that dude is getting his money real quick. That’s when them H players come into play and serve them a pill and put them back in The West End. One of them lil kids will serve him. Lock him up, and he’ll tell on one of them. It’s a cycle. They keep that shit going. It’s deep.

The people that they continue to place in The West End will continue with the cycle. I really feel like it’ll continue because people with weak minds do weak things. It’s going to keep going down until they take The West End back. They’ll eventually take it back because of the location, and that’s what they’re working on doing now by changing the streets. That’s why I said that they are changing the streets but not the streets. If they wanted to change the streets, they would have added a Boys & Girls Club or put $100,000 in renovation in this Boys & Girls Club around the corner. They could have the local rap musicians come to these places and show these kids that, ‘Just because I rap, it doesn’t make me a bad guy. Just because I say I do this, it doesn’t mean I’m out here really doing this, G.’ A lot of people don’t know that the Migos went to college. Them dudes ain’t no trappers. They really not out here in these streets, but yet that’s the type of music that they really want our kids to listen to because if they hear it, they’ll do it. They know that.

I feel like The West End would be doing so much better if the people came together. The only time we come together is when the police is beating up on us, and that’s because we’re sick of that shit. That shit’s been going on forever, and we’re sick of that shit. Other than that, they not coming together saying that nobody is down here in the Boys & Girls Club, reading books to the kids. Ain’t nobody down here, standing on corners, making sure that people got food in their house. When it’s freezing outside, they ain’t opening up a building, talking about anybody can come down here if they need a place to stay. They’re not doing any of that, but they’re changing streets.” •