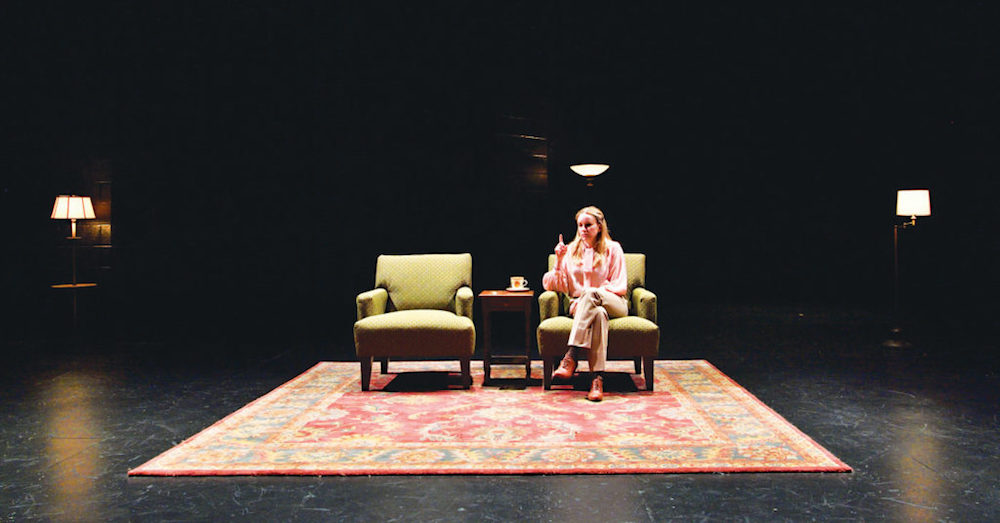 Emily Cass McDonnell in ‘The Thin Place,’ part of the Humana Festival of New American Plays. Photo by Jonathan Roberts.

When she was a child, Hilda, the central character in Lucas Hnath’s play “The Thin Place,” would sit on the floor with her grandmother. Then, her grandmother would write a word in a notepad and tell Hilda to “listen” for the word — not with her ears, but with the part of her head located just behind and a little above her eyes.

Hilda’s mother viewed this telepathic exercise as a “demonic” ritual and eventually barred Hilda from having any contact with her grandmother.

But by that time, Hilda and her grandmother had established their psychic connection.

At least that’s the story Hilda reveals in the delicately mad monologue that opens this play, which opened last week as part of the Humana Festival of New American Plays.

That opening monologue, delivered with soft-spoken authority by Emily Cass McDonnell, is a theatrical marvel. It is haunting and ironic, witty and discomfiting, a masterpiece of iron-clad lunatic logic.

It’s exactly what you might expect from Hnath, whose relentless rationality often opens the door to an impenetrable mystery. It’s a process that has produced some of the most provocative plays of the last decade — “Death Tax” (Humana 2012), “The Christians” (Humana 2014) and “A Doll’s House, Part 2” (eight Tony nominations for the Broadway production in 2017).

“The Thin Place” finds Hnath collaborating once again with former Actors Theatre Artistic Director Les Waters — and it’s a perfect pairing. As a director, Waters revels in straddling “thin places” — the porous borders that separate the mysterious and the material worlds. And this play straddles that very line.

Hilda is obsessed by the work of a professional medium, Linda (Robin Bartlett), a masterful practitioner who enjoys being admired but is loath to discuss her process. It turns out that Linda’s days of being a practicing spiritualist in Europe are coming to an end  because of EU regulations that require her to make disclosures that — not surprisingly — cast doubt upon her claims to communicate with the dead.

But, thanks to her brash American cousin Jerry (Triney Sandoval), Linda has been fast-tracked for immigration to the U.S. — where mediums are apparently unregulated. And at a raucous and combative celebratory gathering where Hilda meets Jerry and the idealistic and apparently progressive Sylvia (Kelly McAndrew), Hilda’s world of mist, mystery and faith collides head on with the real world and a host of cynical realities that culminate in a phone call and a strange and chilling voyage into Hilda’s past.

This is a stunning production of a literate, gothic mystery. The intimate setting of the Victor Jory Theatre emphasizes the extraordinary performances. And the play has a powerful impact that belies the deceptively minimalist technical aspects: Kristen Robinson’s scenic design; costumes by Oana Botez, Reza Behjat’s lighting; Christian Frederickson’s sound and the impressive work of Steve Cuiffo, illusion designer. •

The Commonwealth Theatre Center’s Professional Company-In Residence opened its production of “Cabaret” last week. It’s a stunner. If Louisville theater had a star system — and it deserves one — Neill Robertson would be one of the brightest stars. Over the last few years, he has played a marvelous assortment of characters with Kentucky Shakespeare, Pandora Productions and Actors Theatre of Louisville (where his performances as Renfield in “Dracula” have wowed audiences).

In this production, he plays the Master of Ceremonies at the Kit Kat Club during the waning days of the Weimar Republic. And the Emcee’s character arc from gleefully sly celebrant of amorality to tattooed anguish in the final sequence is something to see. Robertson is not alone. This fine production of a demanding masterpiece benefits from great performances by Jennifer Pennington, Mera Kathryn Corlett, Jonathan Patrick O’Brien, Tim Mathistad, Annie Givan Smith and Hallie Dizdarevic as the Nazi operative Ludwig.

I can’t count the number of times I’ve seen “Cabaret,” but it’s always a chilling and moving experience, and this production, directed by Seth Lieber with a fine musical ensemble led by John Austin Clark is no exception. •

Summer romances have long been a staple of pop culture, especially romances that play out during the summer between high school and college. “Girlfriend,” Todd Almond’s musical drama, is inspired by and uses the music from Matthew Sweet’s 1991 album by that name. It adheres to the customary narrative: a secret crush that garners an unexpected response and gingerly blossoms into a deep affection, encounters reversals and eventually succeeds.

But this summer fling, set in Nebraska, is complicated by the fact that it brings together a handsome, accomplished athlete, Mike (Remy Sisk) and a slightly nerdy, shy guy named Will (Michael Detmer).