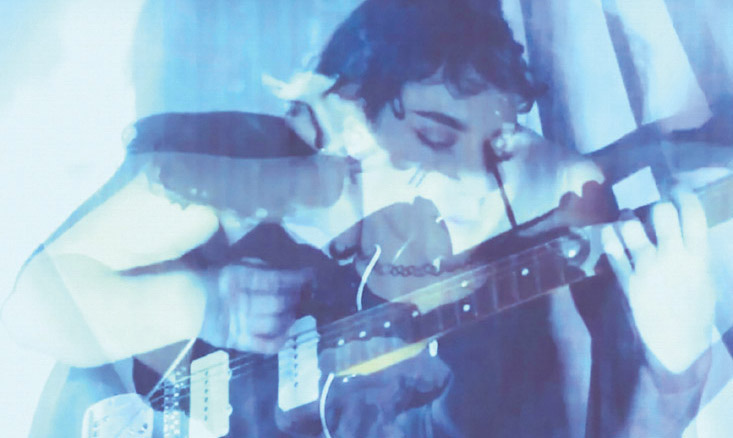 Like many artists, Alyc Diaz, the main operator of the project Vyva Melinkolya, does her best work when she’s not, well, exactly happy. As proof of this, Diaz has dressed her self-titled album in full melancholic regalia, none more sonically so than the single “1:00 AM.”

“It’s a little bit grim, but I always say that good feelings don’t write the hits,” Diaz said. “It’s not a happy song. It was a little bit before or in the first couple months I was starting to physically transition and, with being a trans-woman, dating is really hard. There’s a certain acceptance of loneliness I have or did have at the time I wrote this. Men kind of pushing me to the side or keeping me at arm’s length because of being trans. The song definitely came from a place of loneliness and feeling abandoned and feeling discouraged with myself.”

This sense of loneliness is palpable on “1:00 AM,” a lush song where spaced-out guitars jangle over a wall of reverb drone and light drums, where Diaz’s soft melodies weave a tale of heartbreak that’s more abstractly felt than concretely deciphered.

“Shoegaze and dream pop are the most comfortable ways to describe me,” she said. “I don’t shy away from the terms. I fully embrace it. Ultimately, I just like to find what works, what’s going to grab people. If it gives me chills, I know it will give other people chills, if that makes any sense. Even though the melody is pretty simple there’s a lot going on still, and I like to write that balance. I like to think that I’m just making really, really, intricate pop music. In terms of the way I produce music and the way I write it, I feel like I’m Sheryl Crow with a lot of guitar pedals.”

“1:00AM” enjoys a universality and an ability to be widely appreciated and related to. It covers the sort of disappointment and loneliness that comes with being stood up by someone.

“It’s the feeling of getting all dressed up and all psyched up for a moment that’s not going to happen or a moment you’re going to have to wait for,” Diaz said. “I can remember one night when I got all dressed up, and I was proud of my makeup, and I got a really nice dress from my mom, and the guy just canceled on me. I think that’s where some of the lyrics came to fruition. In the final chorus of the song it says, ‘You know how I hate going out,’ and I guess that lends itself to the fact that I’m an isolatory [sic] person by nature, so when I choose to be social or put myself out there, it’s very selective, and it means something.”

“1:00AM” has quickly become one of Vyva’s signature and most requested songs. It wasn’t something Diaz had envisioned, and she was, initially, not keen to perform it live.

“Even though it’s a successful song in terms of people’s reception, it hasn’t been my favorite song to play live,” Diaz said. “I play it a lot heavier now than it was originally intended. Also, if I could go back and change something I would have made the lows in the song a lot fuller. I wish it had more of a backbone to it. If there’s not a certain combination of sounds there to balance itself out, like if there’s not the dreamy guitars, I feel like a grunge band, and if there’s not the heavy guitars, I feel like I’m doing some run-of-the-mill indie pop.”