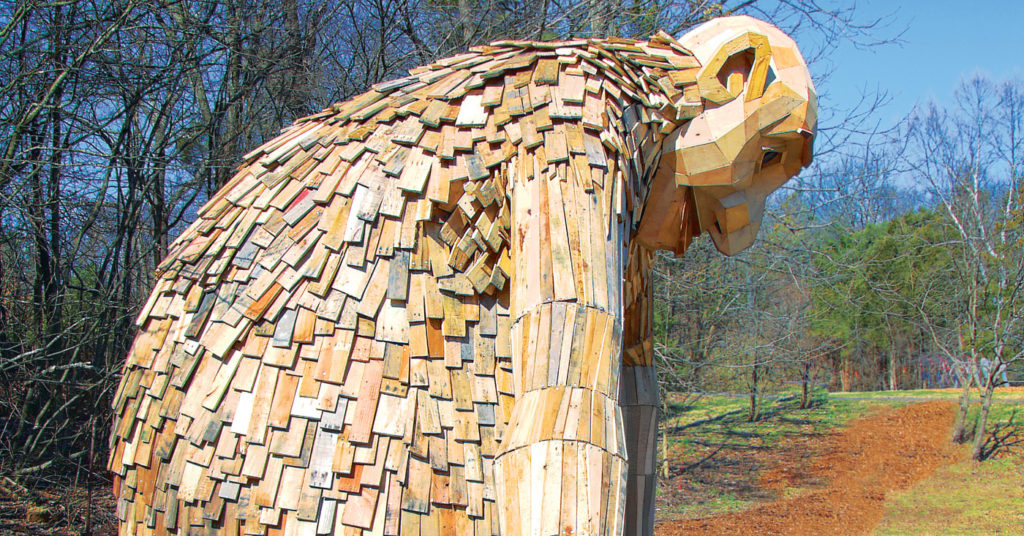 As I drive the serpentine road toward the Visitor Center at Bernheim Arboretum and Research Forest, I see small yard signs carefully spaced to build anticipation:

My eyes begin to dart into the trees trying to spot one of these fantastic creatures, until I come around a turn, and there — sitting on the bank of Holly Pond is a crouched wooden giant, hands securely planted on the ground as it takes a gander at its reflection in the water. “Little Nis,” named after a baby the artist’s friend recently had, sits approximately 12 feet tall, made of slats of reclaimed wood from pallets, fallen trees and discarded lumber of new construction homes from nearby companies. His head is incredibly smooth, besides the fact it’s assembled from hundreds of geometric pieces. His nose and ears have hollow openings to encourage various animals to house themselves there.

It’s so magical that you sense you shouldn’t disturb the scene, but let’s be honest — you’re going to take a pic.

Taking photos of this giant and two others rising at Bernheim is something their creator, Danish artist Thomas Dambo, 39, is conscious of when he places these figures in a natural setting.

“It’s such a big part of the world right now. Where would be the best place to stand to capture this?” he explained to me last week.

Dambo’s taken that headache out of the equation for social media mavens and has placed his three Forest Giants on Bernheim’s property in idyllic poses and settings. However, to add to their mystical charm, two of them are hidden deep in the forest’s flora.

“I like to hide my trolls. Really far away. My favorite is for people to hike an hour or so to find them. I think it’s really important to do something that pulls people out into nature so they can see how beautiful and stunning nature is because once they see it, they’ll want to take care of it. It’s a part of my sustainable, recycling message to bring people into the natural world, and the trolls are a gamification on art in that way.”

Fresh from his recent installation of six giants at Chicago’s Morton Arboretum, he excitedly showed me a recent Chicago Tribune article attributing his “Troll Hunt” to be “Chicago’s only blockbuster museum exhibition of 2018” and holding Morton Arboretum’s “highest attendance in its 97-year history.” This year, Bernheim celebrates its 90th anniversary and, via its site-specific art residency program, [email protected], invited Dambo to create his second-largest installation in the United States. Bernheim is expecting to experience increased attendance and already has staff formulating plans to accommodate visitors over the time frame of the giants stay during the next three years.

Dambo’s message of using trash for good is very much in sync with Bernheim’s sustainability practices and achievements. Their commitment to environmental stewardship got them the 2018 American Public Gardens Association (APGA) Operational Sustainability Award, which recognized their solar paneled edible garden, LEED Platinum Visitor Center, sustainable garden horticulture classes, wetland research and bat conservation. Dambo said, “All of my projects are about sustainability. I use branches or clean wood sourced locally because my mission is to show other people that you can build anything out of trash. They may not say ‘Hey maybe I can build this giant troll,’ but they may think I can build a garage or a chair. Using recycled materials, you have to get the best, be satisfied with what you have, and you have to learn to freestyle.”

(And yes, some of these materials are from reclaimed bourbon barrels.)

Dambo knows a thing or two about freestyling. Before he became a globetrotting troll artist, he was a street artist using spray paint as his medium and eventually adding beatboxing then rap to his repertoire. “I’ve made street art for many, many years. I trained with hip-hop artists in Denmark. I got tired of the beatbox battles. I just thought it was fun. Then, I started rapping and put out eight or nine albums. Dambo is a name I got from friends as a kid because I had ADHD. Dambo is the pronunciation for ADHD in Danish. I had a hard time concentrating and had a lot of energy and not the most steady hands in the world, but I could pop up with new ideas all the time. That’s why I started experimenting with all types of street art. I respect graffiti, but I could see my friends getting sucked into this criminal world even though they wanted to express themselves creatively.

“So, I thought maybe I can express myself creatively where I don’t have to sacrifice being a part of society, but I can beautify the world for myself and society at the same time. Because what I’m doing now is so positive and big, people volunteer and help me.”

Alongside his design team of eight, there are many volunteers who have come to help Dambo complete his vision. Over the sounds of migrating geese overhead and electric saws chewing through rough boards, I observed as they matched piece to piece and asked, “How’s it going?” Their reply, “As easy as a jigsaw puzzle.”

As well as being visually spectacular, Dambo creates a backstory to his giants.

“The giants are a fairy tale I write. They’re all a part of a struggle with nature and mankind. Mankind is the biggest enemy toward nature, and the trolls represent nature. Another project I’m doing, the story is the trolls have realized the reason humans can’t take care of the world, is because they’re so small and can’t see the world. So, they want to build a tower so humans can come up to see the perspective of a giant. I like these stories.”

The stories of the three Forest Giants at Bernheim is of “Mama Lou Mari” and her two children “Little Nis” and “Little Alena.” The word “Little,” of course, is said with a wink.

“They’re named after people I know,” Dambo said. “It’s important that they all have names that add to that Nordic mythical feel.” One is a girl playing marbles (rock boulders), one is admiring his reflection in a pond, and a mama is taking a break reclining on a tree. “This is where I come from. These are the stories I grew up with. These [pieces] are much bigger than the sculpture. Like the troll looking into the pond. The pond was already there, but now I’ve done a piece bigger than the sculpture. It’s the entire pond plus the sculpture. It’s alive.” •

Artist Thomas Dambo and his crew will be creating the three giants until March 15. You are encouraged to come watch, but they will be in place for three to five years. Working hours and locations may vary, so follow Bernheim on Facebook or call the Visitor Center at 215-7159 to confirm the schedule.

‘Forest Giants in a Giant Forest’