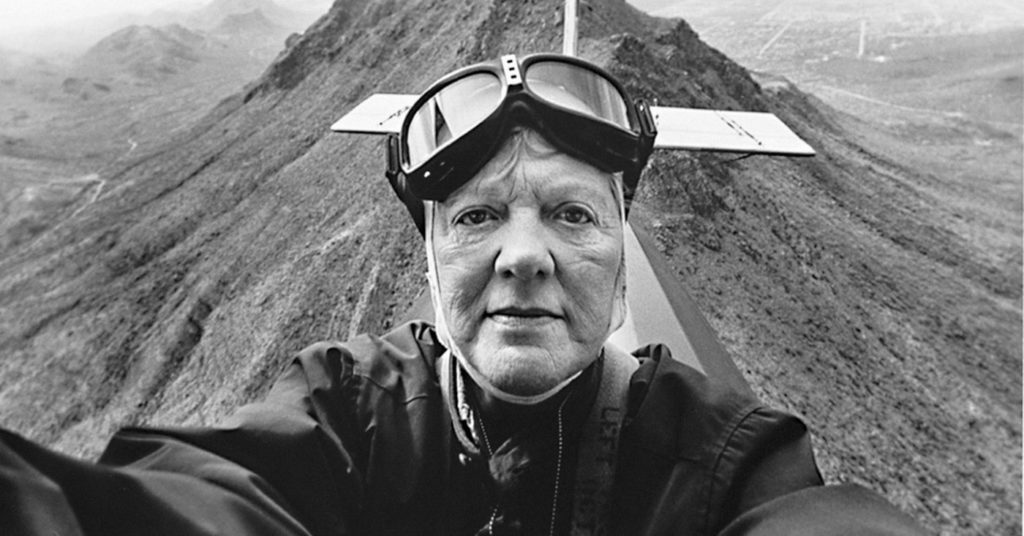 ‘Self Portrait in Bi-Plane.’ Photo by Anne Noggle.

Women are integral to the history of photography. They have participated in the art as far more than muse or subject since its 19th-century beginnings. As the book “Against the Odds: Women Pioneers in the First One Hundred Years of Photography” points out, women’s contributions are more enormous than are recognized. And, in light of the #MeToo movement and the women’s march on Washington, not to mention the unearthing of our persistent and degrading rape culture, there’s no better time to rectify that assumption.

The show “See Me Clearly: Women Photographers, Women Photographed” at Paul Paletti Gallery lends itself ably to the conversation. Its questions are the same as the photographs presented: What is a woman? What does a photograph by a woman look like? How does a female model approached by a female photographer differ from one under the persistent male gaze?

All of these questions could be answered by Anne Noggle’s singular “Self Portrait with Biplane.” Inspired by Amelia Earhart, the photographer became a pilot, serving during World War II and later working as a crop duster and a stunt flier in an aerial circus. The 1983 photograph, taken while she was actually in flight, shows a woman in her 60s, confident and able. The only gaze of assessment is her own.

In fact, Noggle, who died in 2005, came to focus her photography on aging women, a project she called “the saga of the fallen flesh.” Her photograph “Three Women” shows three elderly women, whose wrinkled skin and jewelry are mere clothing for each of their penetrating eyes. It is a vision rife with compassion and understanding.

England’s Julia Margaret Cameron, one of the earliest pioneers in photography, is represented by the oldest photograph in the show, her 1872 portrait of Alice Liddell — famous for having been photographed by writer Lewis Carroll and generally assumed to be the inspiration for “Alice In Wonderland” — in the garb of St. Agnes. It’s notable that, as the description accompanying the photograph states, St. Agnes is the patron saint of rape survivors. As for the antiquated wet plate collodion process used to make the image, it is still in use today — most notably by the accomplished Sally Mann.

A number of accomplished women photographers are represented in the show. An excellent image by Marion Post Wolcott, who photographed for the Farm Security Administration during the Great Depression — including in Kentucky — features a woman at work in a 1930s kitchen. Rich in detail and tones, the metallic sheen of the pots rings in the silver gelatin print. Everything from the print dress to the biscuits is on display — all save the woman’s face, so that she becomes every woman.

Near this humble woman is a portrait of the glamorous Evelyn Tripp, photographed by William Klein. His 1958 “Smoke & Veil,” taken for Vogue (many photographers by this point were working commercially and for the magazines that had cropped up, women included), is a woman we are likely more familiar with, as images such as this seem to endure in our consciousness. Despite the fact that Hollywood and the fashion industry have lodged these images deep in the cultural psyche, the image stands before us to be considered. Who are we looking at? What is this woman, looking askance at us, thinking? Feeling?

So too with Edward Steichen’s image of Clara Bow, one of the first “sex symbols,” as we understand the term. Bow said, when Marilyn Monroe died, “A sex symbol is a heavy load to carry when one is tired, hurt and bewildered.” We must ask ourselves: Can Steichen’s image, or any image, capture a mind and heart capable of such compassion? If so, how?

And so the question of what a woman is and how she should be approached, figured and portrayed, is everywhere evident in the show. Consider Charis Wilson, most famously the young wife and model of Edward Weston. His famous nudes of Wilson, of which one taken in New Mexico is featured here, explores her body as a form — or such was Weston’s interest, as evidenced by two other adjacent images, his famously erotically-charged shell and pepper. Then consider the portrait of Wilson by Weston’s contemporary, Imogen Cunningham. In Cunningham’s portrait, Wilson is not only fully clothed but reading the newspaper — an intelligent woman who, after all, wrote the grant application that made Weston the first photographer to win a Guggenheim award.

No show of women photographers would be complete, frankly, without Cunningham. As irascible as she was determined, she is frequently overshadowed by her contemporaries — Weston and Ansel Adams among them. But Cunningham’s vision, not to mention her technical expertise, is evident in every flower, nude and human face — including the astounding portraits of Frida Kahlo — she captured. In addition to her relaxed shot of Wilson, her “Forged Ventilator” shows one of her most enduring contributions to 20th-century photography: her Modernist commitment to form and structure.

In this show, the viewer can confront how a man such as Wynn Bullock approaches motherhood, in the famous image of his wife and child after birth, or Garry Winogrand’s take on cheerleaders (“I don’t know that all the women in photographs are beautiful,” he said, “But I do know that the women are beautiful in the photographs”), as well as National Geographic photographer Steve McCurry’s eternal “Afghan Girl” of 1984 and Bill Luster’s incredibly tender portrait of his wife after her diagnosis and treatment of cancer. Of the latter, Paletti said it is “one of the finest examples I have ever seen of conveying character qualities through photography.”

To learn about women’s indelible contributions and commitment to photography, there are a number of important photographers to explore here: Lynn Geesaman, Francesca Woodman, Sonya Noskowiak and Judy Dater among them. There are also a number of male photographers who approach women in a way that is not only respectful and affectionate, but even mystical, as Jerry Uelsmann’s 1992 untitled darkroom masterpiece demonstrates, the woman’s body transforming into a waterfall plunging over granite cliffs.

As such, this show is one room from which to begin the conversation not only on the dignity of women, but the distinguished contributions they have made to our art and culture entire.

For Women’s History Month, Paul Paletti Gallery has organized a guided tour with commentary Thursday, March 14. It will be led by Elizabeth Kramer, former Courier Journal fine arts reporter, and Cristina Carbone, an art and architecture historian teaching the history of photography at Bellarmine University. A reception is from 5:30 to 7:30 p.m.; the tour starts at 6:30 p.m.