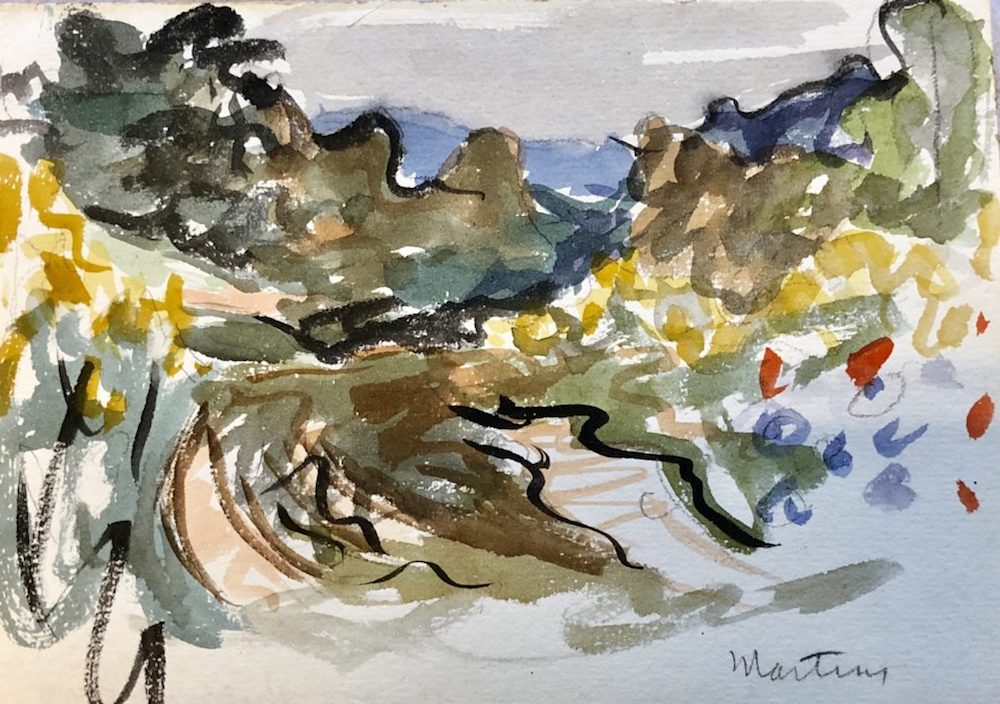 A scene from near Payne Hollow, labeled 'Martins.'

On a morning of intermittent, drizzly rain, down the road from Payne Hollow, the beloved home of Harlan Hubbard in Trimble County, three bald eagles flew a mere 40 feet above the muddy Ohio River shoreline.

The prolific writer, naturalist and artist who lived there for nearly 30 years with his wife Anna would recognize this flooded February landscape, veiled in mist where swaths of the banks were strewn with broken cornstalks. Hubbard, who created scores of watercolor and oil paintings, drawings and woodcuts, died in 1988 at age 88, two years after Anna.

Near the riverbank, the eagles had settled in trees as Jessica Whitehead, an independent curator, set out for the shore, her boots getting sucked into mud with nearly each step, for a better look at Plowhandle Point, the curved bluff on the Indiana side.

Whitehead, a 2011 graduate in art history of Hanover College (across the river to the east), discovered Hubbard’s artworks in its collection and mounted a student exhibit.

“His love of the area came through, even though I didn’t know his story at the time,” she said.

Since 2016 she has been writing a book for The University Press of Kentucky on his watercolors, set for 2020 publication.

Hubbard depicted Plowhandle Point frequently as well as other scenes from the surrounding environs and places where he and Anna traveled. That included a six-year voyage on his hand-built shantyboat launched in 1944 from the Fort Thomas area for New Orleans.

Their trips and Payne Hollow years, documented in his 12 books, have elevated his reputation for his commitment to living with nature. Wendell Berry’s 1990 book “Harlan Hubbard: Life and Work” likely boosted Hubbard’s recognition. People even refer to Hubbard as the Henry David Thoreau of Kentucky.

Yet, his artwork has not received the equal level of attention given to his writing.

Whitehead as well as curators John Begley and Peter Morrin are working to illuminate Hubbard’s work as an artist. They believe his art has been overlooked and overshadowed by his reputation as a naturalist.

Besides Whitehead’s forthcoming book, the Frazier History Museum has opened “The Art of Drifting,” which Begley and Morrin curated with dozens of Hubbard’s watercolors, including several depicting Plowhandle Point.

Before the exhibit’s opening, the two worked among framed paintings on the gallery floor ready for mounting when Begley pointed to one showing Hubbard’s favored bluff painted in autumn.

“These marks look dashed off. But it’s only because he had dashed them off a thousand times before he made that mark,” he said. “You see that’s practice. That’s skill.”

Some trees appear to have limbs that dance. In one painting, Hubbard has painted a thin line to create a lithe branch bending over the water. In another, his mark conjures a tree’s rigid, sturdy and unmovable trunk.

Hubbard practiced writing and his art making as often as he could — but all while maintaining a subsistence lifestyle. He often painted while floating in a johnboat, his “floating studio in nature,” as Morrin described it.

His writings provide insights into his thinking and his way of seeing — always contemplating his surroundings, nature and the landscape. It comes through in his work, Morrin said.

But Begley, Morrin and Whitehead noted the forces that shaped America in the early 20th century — expressionism, fauvism and Chinese and Japanese calligraphy — influenced Hubbard and appear in his watercolors.

That likely has roots in his childhood and education, having studied at the National Academy of Design and the Cincinnati Art School. As a child, he traveled to New York and moved there with his mother.

During those years, Hubbard discovered Thoreau and became devoted to his philosophy. He began to shun industrialized culture. It led him to live many years after age 40 on the river with Anna.

Whitehead noted Hubbard likely saw works by many of the artists who shook the art world — those who were part of the famed 1913 Armory Show in New York, such as Marcel Duchamp with his “Nude Descending a Staircase, No. 2.” He likely witnessed the rise of others including Georgia O’Keeffe.

“Even though Hubbard was truly indifferent about the different art movements and expressionism, it seeped into his consciousness somehow,” Whitehead said.

But Hubbard, she added, criticized artists focused on style and form.

“He said love of subject is the fundamental part of what makes art wonderful,” she said.

Nonetheless, there is no mistaking Hubbard was playing with style and form to capture subjects he loved.

Among the exhibit’s watercolors, Begley and Morrin held up examples of several paintings where Hubbard worked with color, light and shape paralleling other artists’ works. Begley saw a Hubbard sunset with lush bands of color evoking paintings by Mark Rothko. The strong color in brush marks among bold black strokes in another piece reminded Morrin of abstract expressionist painter Joan Mitchell’s work.

For Whitehead, work of two artists, who painted watercolors of landscapes, stand out as Hubbard’s companions: Charles Burchfield, who lived in the Buffalo area, and Walter Inglis Anderson, who lived in Ocean Springs, Mississippi. Like Hubbard, both kept journals about their travels and their feelings on art. Unlike Hubbard, both received major recognition in the art world and have museums in their names.

But Whitehead noted that Hubbard was different in another way.

“He was so committed to this beautiful way of life — he actively pursued it,” she said.

Selling wood, scavenging for food and raising goats and other chores took so much time, Morrin noted. That chosen lifestyle and philosophy also meant he had no time for the business side of art or making more art. “Self-promotion would have aligned him with the industrial world,” he said.

Even without self-promotion, Hubbard’s work remains significant. A belief held by Whitehead, who decisively stated, “His life is applicable and relevant everywhere.”

Proof lies in the experiences Begley and Morrin had when they began organizing this exhibit last year and found other artists as well as historians pursuing work related to Hubbard.

They discovered Angie Reed Garner was working on a show of her paintings inspired by Hubbard at garner narrative contemporary art gallery and the Filson Historical Society’s plans for an exhibit of shantyboat life on the Ohio River from the 1850s to the 1950s.

Then, there was an artist from California, Wes Modes, contacting Louisville galleries about bringing his project, “A Secret History of American River People,” to town. It includes his travels in a shantyboat built by artists. This summer, Modes is traveling on the Ohio River from Pittsburg to Louisville, and the Portland Museum now hosts an exhibit about his previous excursions on other rivers.

This spurred Begley and Morrin to collaborate with people across the region to organize “Afloat: An Ohio River Way of Life,” a year of events inspired by the art, writing and environmentalism of Harlan Hubbard. It includes exhibits, panel discussions, lectures and children’s activities.

Morrin describes “Afloat” and the Frazier exhibit as a way to better connect the community with the Ohio River, a major entity that defines and shapes us, and present ideas about the river’s beauty, the threats to it, its needs and its unmet potential.

Morrin called Hubbard’s work and what “Afloat” has to offer opportunity for rediscovery and new discoveries. But at the heart is Hubbard, who Morrin said, is “and first and foremost an artist.”

‘The Art of Drifting: the Watercolors of Harlan Hubbard’
Through May 5
Frazier History Museum
829 W. Main St.
fraziermuseum.org
Prices vary