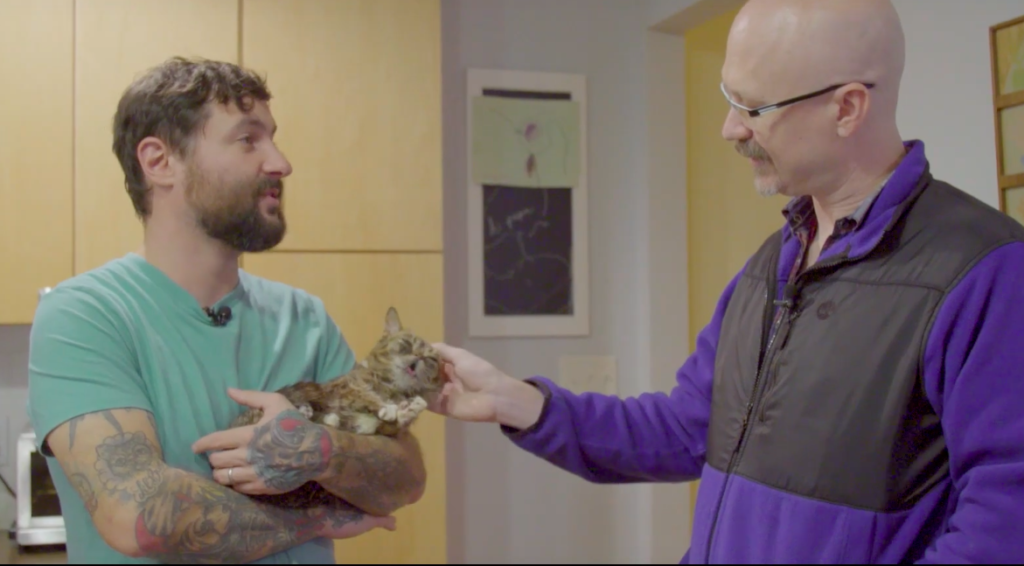 A still image from Dan Canon's 'Midwesticism: Stories from the End of America,' during his interview with Mike Bridavsky of Bloomington, Indiana, and Lil Bub.

Dan Canon, a Southern Indiana civil rights lawyer who helped take the marriage equality case to the U.S. Supreme Court and won, has launched a video series called “Midwesticism: Stories from the End of America.” His most-recent installment is with Salem Vytch-Tryells, a champion drag performer living in Elizabethtown. But we are partial to his premiere piece: Mike Bridavsky of Bloomington, Indiana, a recording engineer and owner of Indiana’s most famous living cat: Lil Bub. Don’t let the subject fool you. The piece raises serious issues, and Canon, who also is a columnist for LEO, tells us he has a serious agenda behind the series — to “give people a roadmap for making a better world” by introducing viewers to “unique change agents here in Indiana and Kentucky.”He took time to answer questions about the series.

LEO: What inspired or provoked you to start your series ‘Midwesticism: Stories from the End of America’?
I’ve spent pretty much my whole life in the Midwest as a musician, an activist, a lawyer and a politician. I’m always looking for ways to make effective change, and I think that requires constant evaluation and reevaluation of what’s working and what’s not. The conclusion I keep coming back to is: the courts and electoral politics are not really an effective vehicle for improving the lives of regular folks. And as demonstrated by the last election, even when the rest of the country makes a little progress, the Midwest often gets left behind. We have to figure out how to break out of this cycle. I don’t think the answer starts from the top down — real social change, the kind of change we need, has always come from the bottom up. So I’m looking for people who are unique change agents here in Indiana and Kentucky, and trying to give them a platform to talk about what they’re doing to make the world a better place.

What do you hope to accomplish?
I want to help give people a roadmap for making a better world, one piece at a time, from wherever they are. I think everywhere you go, you find well-meaning people who want to help somehow but don’t quite know how. I want to give them some answers. At the same time, I want to bust up stereotypes about what it means to live in this part of the country.

How do you pick your topics?
There are four of us who brainstorm and workshop topics, but so far it’s mostly just people I’ve had the privilege of getting to know through one walk of life or another.

What does the name reference, or what is Midwesticism?
It’s just a cool sounding name that Erin McMahon (social media manager) came up with. We wanted to be focused on the Midwest, and weaving in the idea of mysticism makes sense because we are trying to show the ‘magic’ stuff people do here every day.

Tell us the truth. Is Lil Bub as cute in person as on Facebook, and did you get to hold her?
*She is super cute, but no one holds her except her owners. One of the many amazing things about Mike Bridavsky (Bub’s dad) is that he knows a lot about caring for special needs pets, and Bub has some major challenges. That’s part of what makes her so effective as a symbol of what you can overcome and still live a meaningful, fulfilling life. We talk about that in the episode. It’s not just another internet cat video, I promise.

How can people help?
How people can help? Give us money so we can meet our overhead and eventually quit our day jobs, and/or send us stories of the coolest people you know who are living in the Midwest. They can reach us through FB or [email protected] [Also donations may be made at: https://www.patreon.com/dancanon]