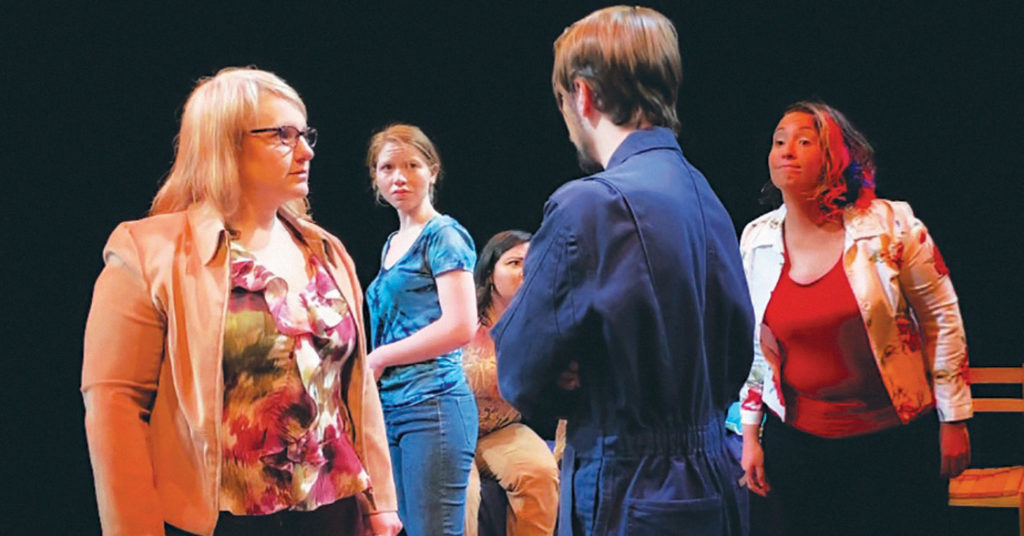 The cast of Karen Zacarias's 'Just Like Us,' presented by Looking for Lilith Theatre Company and Teatro Tercera Llamada. Photo by Holly Stone.

The heated discussion surrounding immigration inspired Helen Thorpe to interview four Mexican-American girls — two documented, two undocumented — and eventually write a book about immigration from their experience. Nearly 15 years later, the continuing debate led to a collaboration between two local theater companies: Looking for Lilith, known for its woman-centric productions, and Teatro Tercera Llamada, a prominently Spanish-language company. Their production of Karen Zacarias’ “Just Like Us,” based on the Helen Thorpe book by the same name, is spoken mostly in English with Spanish subtitles provided. Even the program is split between English and Spanish.

This is a character-heavy story, as it should be. Helen (portrayed by Jennifer Thalman Kepler) explains in the beginning that immigration is such an emotionally-charged topic, and she wants to look at it from the angle of how it affects the lives of the four girls: Marisela (the dramatic one, Jomaris DeJesús), Yadira (the serious one, Hannah Marie Connally), Clara (the sweet one, Brenda Moran) and Elissa (the bossy one, Lillian Ramirez). The show begins by focusing on all four friends, but, as the first act ends and the girls leave for college, Elissa loses contact with them and leaves the show. (Ramirez returns to play Yadira’s sister, Zulema, in the second act.) In the second act, the story’s lens begins to zoom in on Marisela.

Marisela is ambitious and works hard at school — though not so hard that she misses an opportunity to party — but because she’s undocumented, she faces more obstacles than some of her friends. Throughout the show, she finds a passion for civil rights and takes up the mantle of one of the show’s main themes: giving undocumented immigrants a voice in the conversation. Helen, a white reporter and an immigrant from London, serves as the narrator for the story but also is the character who, besides Marisela, undergoes the most character development. This could border on white savior complex, but one of the most powerful moments in the show (which happened in real life) is an argument between Marisela and Helen in which Helen says, “This is your story,” and Marisela counters, “Then why aren’t I the one telling it?”

The issue of immigration is, and has always been, a complicated one. “Just Like Us” doesn’t set out to offer a solid answer (though for those interested in deeper discussion or reference to relevant organizations, it’s worthwhile to stick around for the post-show panel). What it does is remind the audience that this isn’t an argument about an abstract “issue”: it’s about very real lives. •

‘How to Defend Yourself’

But, of course, there’s an underlying reason for the self-defense class: the recent, brutal sexual assault of a classmate, Brandi and Kara’s sorority sister, Suz, who is still recovering in the hospital. As horrified as everyone is by Suz’s situation, it becomes clear that every woman in the group has experienced, to some degree, sexual violence, abuse or situations in which they’ve been made to feel unsafe. While this may sound extreme, what’s even more unsettling is how familiar these stories sound to women, and this is clearly a play written for women first and foremost. In most cases, it’s not even explicitly stated what their experience was. It doesn’t have to be stated. The audience knows.

The boys also feel familiar: Andy is the typical, straight, white male who thinks himself very helpful, while, in fact, he’s usually overstepping. Eggo talks about how what happened to Suz was horrible, while also ranting about girls giving “mixed signals.” Every woman in the audience, whether in college or not, has known men like this, but Andy and Eggo aren’t left as caricatures. Like the other characters, they have their own perspective of the night of Suz’s attack and wrestle with their own questions. Suz’s story unravels slowly — she’s not there to tell it, and the characters are too haunted to talk much about it — but even when it’s not discussed, it’s always there, in their fears, their tensions, and their anger. •

‘How to Defend Yourself’
Through April 7
Actors Theatre of Louisville
316 W. Main Street
actorstheatre.org
Times and prices vary

Only a crazy genius would stock a one act play with more than a dozen characters. Only a crazy company would stage such a thing. Hence, Wayward Actors Company’s production of Woody Allen’s “God” as the first half of a droll, 90-minute bill that also includes David Ives’ one-act “St. Francis Talks to the Birds.”

“God” is vintage Woody, pre-1975 (well before “Annie Hall”). An ambitious Greek playwright named Hepatitis (Spencer Korcz) yearns to write his way into immortality — if only he and lead actress Diabetes (Hannah Wold) can find a good ending for his play. With audience help, a delightful cast, and a surprise visit from Blanche DuBois (Kelly Kapp), who prefers Greek tragedies over those in the French Quarter, they cook up some wild goodies.

Ives keeps his cast to three: Greg Collier as a  moribund St. Francis of Assisi, Korcz and Kapp as two peckish vultures. Directed by Andrew Mertz, both plays are boisterous fun.  —Marty Rosen •