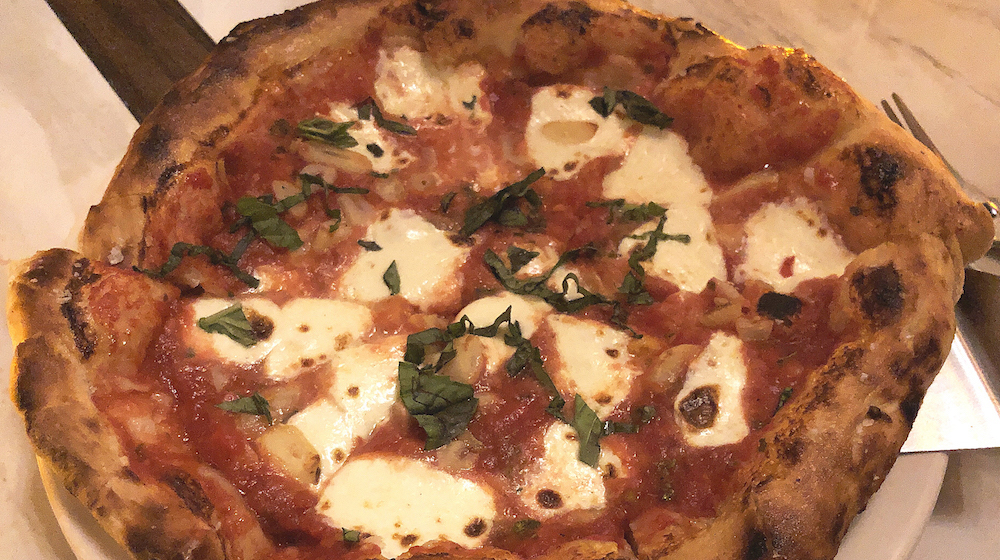 I think Grassa Gramma is more than ready for prime time. Every single thing I’ve had to eat there in two visits (so far) has been really good, and the service was fine in that not-quite obsequious hovering style that’s been a hallmark of fine Italian dining in Louisville since Casa Grisanti went upscale in the 1970s.

But, even two months after Grassa Gramma opened its oversize front doors in Holiday Manor and with crowds trooping in, owner Kevin Grangier and General Manager Tarek Hamada are still striving for perfection. “We’re still in soft opening,” Hamada told me late last month. “It’s hard to get skilled servers in this market. We’re still adjusting our menu. We’re not going to have our grand opening until everything is right.”

Grangier, meanwhile, in a signed card left discreetly on every table, asks for diners’ “patience and tolerance … for any glitches that might occur” during this soft-launch period.

Many restaurants run a brief soft opening for a week or two before they open to the public. But this is the first restaurant I’ve known that stayed in soft opening for two months. More power to Grangier and team, who also give us Village Anchor and Le Moo. Clearly perfection is their goal. But honestly I’m more confident than they seem to be.

Go, now. They’re ready. Sure, if you run into a, um, glitch, let management know. But I really think you’re going to love it.

They’ve done a spectacular job of gutting and remaking the old Emperor of China into Grassa Gramma (“Fat Grandma”), a charming replica of a plaza in an Italian village.  Grangier spent months and a lot of money in Europe buying items including Sicilian stoneware and the huge wooden doors (an import from Egypt) that now form the restaurant’s main entrance.

Chef Robert Rice’s menu tops out at an eye-popping $68 (for la bistecca alla Fiorentina, a 2-pound, prime, dry-aged Porterhouse that’s big enough for two, or maybe four). But the pasta menu is more affordable, with eight plates from $16 (for tomato-sauced spaghetti pomodoro) to $33 (for frutti di mare, bucatini pasta with shrimp, scallops and mussels). Better still, come for a pizza and make your dinner with a wood-fired, 12-inch pie priced from $15 to $17.

The bar, built around a former church altarpiece that now holds beverages, offers short but well-chosen and fairly priced wine and beer lists, liquor and interesting cocktails. I enjoyed a well-made Beefeater negroni ($10).

Square-cut, puffy and warm oil-drizzled focaccia gained appeal from a pleasant, light-toasted top, thanks to a pass through the wood-fired oven.

Beets and burrata ($14) is listed as an appetizer but looked like a salad, and a very good one. Sweet, tender, sliced golden and purple beets flanked a creamy round of pepper-dusted burrata cheese on a bed of arugula and onions in a honey-vinegar dressing with chopped pistachios.

Tuscan kale salad ($12) was excellent, too. Two varieties of baby kale were tossed with apple chunks, crumbled Gorgonzola, grilled chickpeas and walnuts, all in a not-too-sweet peach vinaigrette.

The Nonna Maria pizza ($16) looks and tastes a lot like a classic tomato-cheese-basil margherita, but a surprise, aromatic slices of garlic, lurks under each pool of molten fresh mozz.

Another day, we sat on tall stools surrounding the pizza oven and enjoyed an al funghi pizza ($17) topped with a mix of trumpet and hen-of-the-woods mushrooms and caramelized onions atop earthy Fontina cheese over piquant jalapeño-mint pesto, an amazing flavor combination.

Cacio e Pepe ($19) was made with fresh bucatini, which was pretty good, although, in my opinion, the al dente bite of dried pasta would be a better choice with this classic Roman dish. It’s still a winner, though, a simple preparation tossed with Pecorino Toscano cheese, French butter and enough cracked black pepper to make a statement.

Every dessert we’ve tried has made us want to lick the plate: Light, fluffy, lemony panna cotta ($12), indulgent chocolate and caramel budino pudding ($11) and a trio of crisp, flaky, cream-filled mini-cannoli in three flavors.

Noise level: Don’t expect quiet in this crowded, stone-walled environment, but, generally, we could converse. (Average sound level was a little over 79dB, between a moving car and loud singing, with peaks just under 90dB, from the sound of loud singing to a motorcycle engine.)

Accessibility: Only the bar and one dining room are accessible to wheelchair users. The main room is down steps, possibly accessible only by requesting private access through a back way. The massive entry doors may require assistance to open.