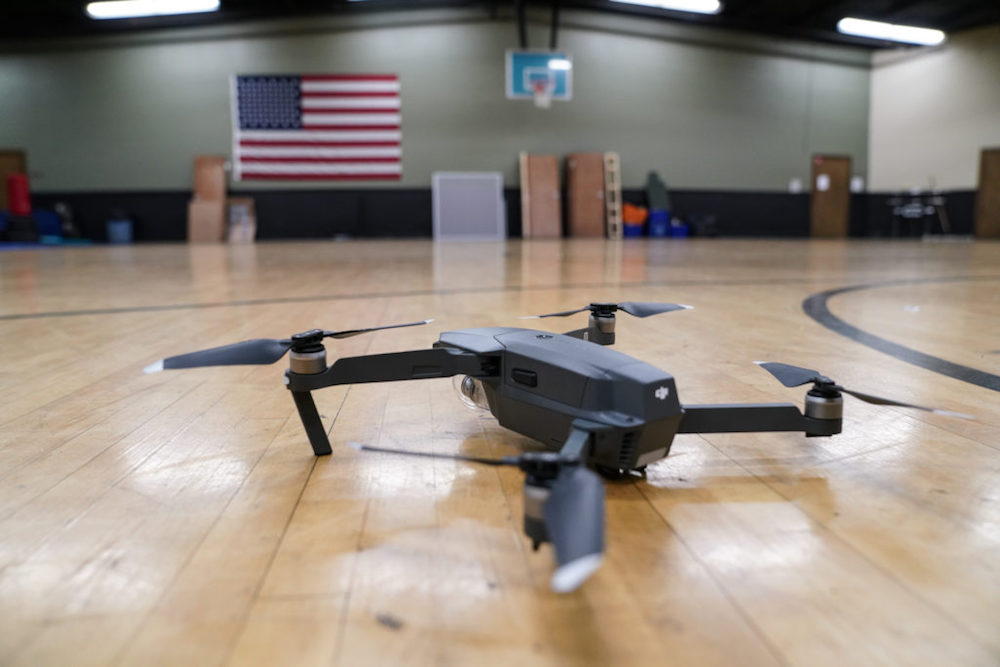 A Jeffersontown Police officer demonstrates flying the department's DJI Mavic Pro drone in the police department gym. He asked not to be identified because he does undercover work | Photo: J. Tyler Franklin

This story is part of a collaborative reporting initiative supported by the Pulitzer Center on Crisis Reporting. See all the stories at taken.pulitzercenter.org.

The Jeffersontown Police say they probably wouldn’t be able to have a 12-officer Special Operations Group without the money they seize from suspected drug traffickers.

They use asset forfeiture money to reimburse the police department for overtime when the special-operations team is called out to a scene. The seizures paid for body armor, medical supplies and a retirement plaque for an outgoing officer.

The suspected drug money also bought the department a sports car, a submachine gun and a drone.

“We go into this looking at the interest of, how are we going to keep our community safe?” said Maj. Brittney Garrett, who oversees the agency’s budget. “We want to do that with the right personnel and the right equipment.”

Kentucky law dictates that agencies seizing money and assets from suspected drug traffickers use it for direct law enforcement purposes. A KyCIR review of $3.7 million in spending records from 17 law-enforcement agencies in Kentucky shows that officials take varied interpretations of that rule, buying a sniper rifle with a silencer, a vacuum, gym equipment or a lunch at Hooters with seized funds.

Some law enforcement officials say the funds are a key budgetary supplement, and without them, officers would be ill-equipped to fight crime. But some policing experts and criminal justice reform advocates worry the system offers little oversight and encourages law enforcement to consider revenue over public safety.

“Police departments are so dependent on this cash that it’s the proverbial tail wagging the dog,” said Peter Kraska, a professor in the School of Justice Studies at Eastern Kentucky University. “The whole program has become a runaway growth industry.”

In Jeffersontown, some of the items have been utilized; the special operations unit took some of the gear when it responded to the fatal Kroger shooting in October, for example. They use the sports car for undercover work.

Other purchases are more provisional. The submachine gun, an H&K MP5 they bought for $800, has only been used for training. Jeffersontown spent $11,600 buying the drone and related training in 2017, and so far, department flight logs show it’s taken to the air for six missions.

Four of those missions were training exercises. The others were to “provide a bird’s eye view” of the Jeffersontown Gaslight Festival.

Overall, in 2017, the suburban police department of 50 sworn officers spent $485,000 from the department’s fund of asset forfeiture money, purchasing records show. The agency has seized an average of about $470,000 a year in the last three years for which state records are available.

The department is aggressive when it comes to budget requests, asking for everything it can, Garrett said. But, ultimately, resources are limited, and that’s where forfeiture funds come in.

“It’s down to us to make the right decisions with that money and spend it in the most fiscally sound way,” she said. “And I believe we do that the best we can.”

KyCIR requested 2017 spending records from 61 of the state’s largest law enforcement agencies. Seventeen agencies provided records in time to be included in this report. Here’s how each of those police departments spends the money that comes from asset forfeitures.

Note: Spending that amounts to less than 1% of total forfeiture funds will not appear on the chart

KyCIR requested 2017 spending records from 61 of the state’s largest law enforcement agencies. Seventeen agencies fulfilled the request and provided records in time to be included in this report.

Those agencies spent nearly $3.7 million in asset forfeiture proceeds in 2017, the records show.

That number includes funding from the U.S. Department of Justice and Department of Treasury equitable sharing programs, when federal agencies share a percentage of assets seized during joint enforcement with local agencies.

About 51 percent — $1.8 million — of what the agencies spent in 2017 went to a broad array of law enforcement equipment and computer supplies. Departments bolstered arsenals with new weapons and ammunition, bought new body armor, Tasers and holsters, and paid for software subscriptions and polygraph supplies with seized assets.

More than $230,000 was spent cleaning, customizing and caring for vehicles. About $127,000 statewide went to pay officer overtime.

Some agencies use the funds on miscellaneous purchases. For instance, in Covington, officials with the Northern Kentucky Drug Strike Task Force spent nearly $400 on a television mount and a vacuum. In Graves County, the sheriff paid $153 to replace a door deputies kicked in by mistake after raiding the wrong house.

Many agencies depend on asset forfeiture funds, making it “unimaginable” to lose them, according to Kraska, the EKU professor. And he said it puts pressure on specialized units to pay for themselves.

“Imagine how distorted and warped that can get,” Kraska said. “Monetary and political pressure to do more raids on people’s private residences in order to collect more money to fund themselves. That’s highly problematic.”

The seizures typically happen well before a conviction — during a traffic stop, a raid or other interactions with police. But the money isn’t released for spending until a judge orders it.

State law requires agencies to report the seizures they make to the state Office of Drug Control Policy, and their data shows $36 million was seized in the 2013-17 fiscal years. A KyCIR investigation last year found that only 11 percent of agencies reported annually in the five years examined by KyCIR.

The agencies are not required to report how they spend the seized money.

Louisville Metro Police Department Lt. Col Robert Schroeder said his agency spends it on items that will bring value to the community — and that will “help us get our job done.”

As an example, Schroeder pointed to the LMPD’s purchase of a $43,000 tool — a TacitID Handheld Raman Spectrometer — that officers can use to test and identify substances believed to be drugs.

“That helps us protect those officers and the public from contamination from those dangerous substances,” said Schroeder, who oversees the LMPD’s budget. “That’s not something we would have normally put in the budget.”

The LMPD spent about $2 million in seized money in 2017, according to public spending records. It dipped into the forfeiture account to make $479,000 in payments on ShotSpotter, their gunshot detection system. They bought a new Nikon D810 camera for $2,799.99. They got a covert GPS to track vehicles for $2,200.

“Sometimes we just don’t have enough money in the regular budget to get those items,” Schroeder said. “These are specific tools that we use to provide services and help keep the community safe.”

Agencies Seize, And Spend, Without Oversight

Civil liberties advocates say Kentucky’s laws create an incentive to seize more funds — and that the parameters for how to spend the money are too broad.

Andrew McNeill, the Kentucky state chapter director for the libertarian group Americans for Prosperity, believes law-enforcement agencies are able to spend proceeds “carte blanche” — and that, he said, opens up the possibility for abuse.

“Currently, there are no limits,” said McNeill, whose group advocates for asset forfeiture reform. “There should be some guidelines, some specificity.”

If local legislators had oversight, they might be inclined to allocate the seized money beyond just law enforcement, said Dan Alban, an attorney at the Institute for Justice, a Washington, D.C.-based libertarian advocacy group.

Oversight might also prevent the purchase of items he considers to be “toys for cops,” like sports cars, electronics and military-type equipment.

An officer demonstrates flying a drone in the gym at the Jeffersontown Police Department.

“While it might be nice to have a drone for the police department, it might be better to be spending that money on school or infrastructure, where the funds are more desperately needed,” Alban said.

But fiscal courts across Kentucky are not complaining about how the money is getting spent, according to Rich Ornstein, an attorney with the Kentucky Association of Counties. Fiscal courts are the bodies that control county government spending.

“I don’t think there’s an issue,” Ornstein said. “Our guys aren’t going out there and just spending their money frivolously. They’re spending it on things that their offices need to operate.”

Morgain Patterson, the director of municipal law and training with Kentucky League of Cities, said decisions on spending belong where they are now: in the hands of law enforcement.

“It’s not like asset forfeiture for our smaller cities is just funny money that they go out and buy toys with. It’s really to run law enforcement in their cities,” Patterson said. “Maybe they do need a sniper rifle. That’s a tactical decision that a civilian doesn’t need to make.”

About $130,000 of the 2017 spending reviewed by KyCIR went to paying informants and making undercover drug buys.

Spending records from these agencies provide little detail about how, exactly, the funds were used. Often, agencies listed a dollar figure along with a scant description of “buy money” or “informant funds.”

But Alban of the Institute for Justice considers this use of asset forfeiture funds a red flag, mostly because of the lack of accountability.

“It’s tough to know how much is being spent, and who it’s going to,” Alban said.

This presents the opportunity for abuse, he said.

And in Kentucky, some law enforcement officials have abused drug buy money.

Marvin Lipfird, the former Harlan County sheriff, stole some $9,300 from the agency’s drug buy fund and misused thousands more in other department funds, according to the Lexington Herald-Leader newspaper. He was sentenced in 2017 to three months in jail and five months home incarceration.

In Whitley County, former sheriff Lawrence Hodge was sentenced in 2011 to more than 15 years in prison for an array of charges stemming from misuse of agency funds — including the drug buy fund.

The state’s Auditor of Public Accounts has also found misappropriation, lax accounting and other misuse of forfeiture funds during regular examinations of sheriff accounts at least six times in five law enforcement agencies since 2015, according to auditor records.

Are Seizures So Routine, Law Enforcement Is Banking On It?

Critics worry that asset forfeiture is so routine, it’s become necessary for police departments to function.

“Consequently, we are relying on asset forfeiture laws to supplement budgets,” Miller said. “This can create a perverse incentive to seize property.”

The profit potential can distort how police think about policing, said Kraska, the EKU professor who has researched seizure programs throughout Kentucky.

“Most objective observers would say that it has turned into a cottage industry that has very little oversight,” Kraska said. “It’s an administrator’s dream.”

To be sure, many law enforcement officials scoff at the notion that officers and deputies are incentivized to seize property so they can have the latest equipment and gadgets and attend specialized trainings.

Loving, the drug task force director, said forfeiture proceeds should only be spent on things “that truly benefit the operation” of the agency.

“That’s a really good thing for the taxpayers: the fact that drug dealers are actually forced to fund part of our operations to go get more drug dealers,” Loving said.

His agency has just one incentive, Loving said, and it’s not profit:

“To get drug dealers.”

Reporter Jacob Ryan can be reached at [email protected] and (502) 814.6559. The Kentucky Center for Investigative Reporting is a nonprofit investigative newsroom housed at 89.3 WFPL Louisville. Read more at kycir.org.