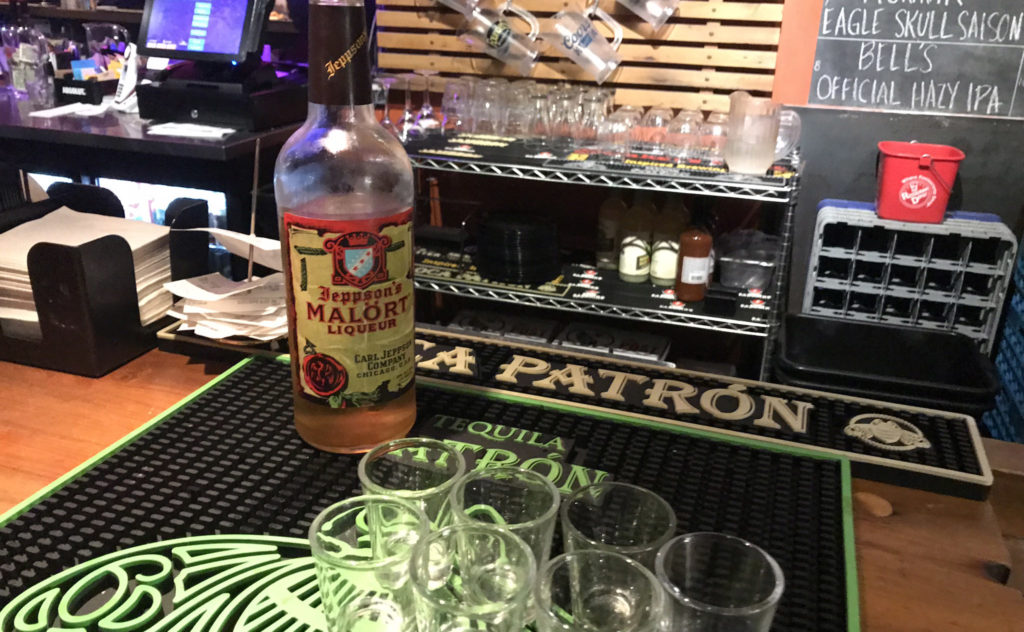 “The only antidote to mental suffering is physical pain” – Karl Marx

The champagne of pain. Turn your taste buds into taste foes. The flavor of the day dad left. Those are but a few quips tossed around — tongue planted firmly in cheek — to describe a rugged, bitter liquor forged by Swedish immigrant Carl Jeppson. First produced in 1930s Chicago, Jeppson’s wormwood-based concoction swiftly established itself as an infamous staple of local lore. With a pungent character as harsh as the city’s winter, this unruly riff on a Swedish bäsk became an inside joke and a hazing ritual unleashed upon suspecting bar patrons. Describing its flavor turned into a parlor game for niche imbibers. My go-to is “the aroma of grass freshly cut by a leaking mower.” Because of the bitter nature of this virulent spirit, many early adopters believed it to possess medicinal qualities. Certainly, the agony of shooting a weaponized cordial can feel akin to a cleansing, like a sweat lodge.

This gnarly crime against humanity is called Malört. And it rules.

It turns out Heidleberg Distributing is to blame for Louisville adding yet another scourge to its repertoire of horrors alongside biblical flooding and the pollen count. Starting April 1, a date whose irony is not lost on the Malörtariat, this unusual botanical “produced for that unique group of drinkers who disdain light flavor or neutral spirits” — as the label once proclaimed — will be available in Kentucky. To both celebrate and exorcise its arrival, a group of palatal masochists pub crawled through Germantown last week, myself included.

Yet Malört is no stranger to these parts. After all distilleries (yes, all) shuttered in Chicago proper, Malört moved operations to Kentucky between 1987 and 1989. The distiller, seemingly not wanting to fess up via historical record, eventually found it unprofitable, if you can believe that, so Malört retired to a Florida production house. Passed down through wretched oral history, neither its mystique nor loyal Chicago cult following waned, and after 30 years, the grimace-inducing intoxicant is once again produced in the city where politics are as corrupt as Malört’s contemptible finish. And praise be, Kentucky welcomes this grody elixir back to befoul her bluegrass again.

“I’m from Chicago, so for me it tastes like home,” said bar crawler Neil Alvarado, who mentioned the legend of Carl Jeppson as “a heavy drinker and smoker who ruined his taste buds and wanted a liquor he could feel that burn in a shot.” Louisvillian and fellow crawler Joey Flispart has no official connection to Chicago, but he did make it on the leaderboard as a finalist in Malört’s self-aware caption contest (“Not because you earned it, but because you deserve it.” — Copyright, 2013, Joey Flipsart). “Its flavor brings about a unique, grotesque description from each consumer,” he said. “Yet, it’s like [the movie] ‘The Room’ in the sense that it’s truly hard to describe, you just have to experience it.”

Heidelberg’s McAllister Merritt, who organized the bar crawl, made sure Louisville consumers experienced this hand-crafted urban runoff. For Merritt, the appeal of Malört, like a B-movie, is simply that “it’s so bad that it’s fun.”

“I usually describe [Malört] as if you got some perfume or cologne accidentally in your mouth with just the most bitter earwax-y linger,” Merritt said. “I’ve heard some other crazy descriptions too, like nail polish and gasoline, chewing on potpourri and rye bread, as well as some I probably can’t say here.”

Malört’s ghastly Goss Avenue bar crawl popped off at The Pearl right at 5 p.m., because self-induced bodily harm should at least allow you the possibility of getting home at a reasonable hour. The bartenders paid homage to Carl’s home with a recreation of The Bukowski, a Malört-based cocktail by Chicago bartender Charles Joly. “There’s no garnish because the writer would have just thrown it back at the bartender,” he told Chicago Reader in 2009 — not to mention garnishing Malört is truly the most cynical way to polish a turd. Kaiju, as one might expect from a gaming parlor, retrofitted a Plinko board with its proprietary “Drinko,” a game featuring one nicer shot mixed in with multiple Malörts. Four Pegs, The Post and Nachbar all offered the traditional shot and chaser specials. Purists might argue that PBR is no substitute for the more customary Old Style (known as “The Chicago Handshake” when paired with Malört), but no one likes a pedant at a bar crawl, and to my knowledge, no purity laws exist for herbaceous antifreeze.

Mr. Lee’s, however, hoisted the W flag by going full weird — and creative. Now, this column has been critical of the Germantown speakeasy in the past, due in no small part after telling the press it was named after a made-up Asian dude because they wanted “an Asian flair.” Unequivocally whack shit. However, it came up tough with some — are you sitting down? — Malört cotton candy. That’s right, Malört-soaked sugar, spun and served. Grapefruit-forward with some paint thinner on the back end. “Why would you want to make and eat candy out of something that sucks,” a smoother brain might ask. Why do people jump out of planes or shit their pants during a 26.2-mile run? Sometimes human triumph is, in its process, unpleasant. But I and the 40 or so fellow Malörtariat can boast that we’ve devoured cotton candy sourced from Midwestern Hydra’s blood.

On this unseasonably warm February evening, Malört was welcomed to the city heartily by a large, denim-clad, tattoo-laden cadre of service industry folks all in on the joke — with also a couple of IT guys, a yoga teacher, a podcaster, a person rockin’ a Carly Rae Jepsen shirt and an alt-weekly column writer, amongst others. Drinking Malört is a joke of which we make ourselves the butt, of course, because ain’t nobody else making us consume and subsequently pay for this shit. Appreciation of that, which is truly absurd, like this calamitous cordial, is based on calculus nestled within many levels of irony. And if irony has become the shorthand of millennials this decade, Malört just might be the house special. Sure, the profile is brutal, but it’s also artisanal and vintage, technically speaking, and as funny as the dumbest meme too (do a Google for “Malört face”).

“I think, honestly, [its appeal is] a mix of both irony and sincerity,” Merritt said. “My theory is no one actually likes it — there are just people who can tolerate the bitterness, and people who can’t.”

For Alvarado, Malört is simply the best primer for the evening. “Back home, we would always start with Malört before hitting the bars and then do whatever we want the rest of the night.” Not a bad strategy, as Malört’s 70 proof is enough to get you wavy, but not enough to get you trashed, with the value-added, death-forward bonus of a piquancy so hostile you could absorb anything lobbed your way without a scratch.

For others, Malört’s currency serves as a response to the overly-twee, precious attributes within the craft cocktail movement — its handlebar mustaches, suspenders, trilbies and speakeasies with Prohibition-referencing, uh, exterior signage. This pendulum swings particularly hard in Louisville, in which the answer to nine out of 10 civic questions facing our city’s future is “bourbonism.” The ‘70s and ‘80s are sometimes referred to as a time that “taste forgot,” while conversely, this generation’s shared values reward quality and craftsmanship. No doubt it’s a positive taste-making trend that millennials are #killing Applebees and Buffalo Wild Wings and bad beach cocktails and stuff made from a petri dish. Yet, posturing a small batch feel with big marketing money comes across as inauthentic from a mile away, and a certain class of cocktail bars will try to navigate these sorts of tricky optics with varying degrees of success. In other words, striking a tone that doesn’t feel corny to consumers with a sensitive bullshit meter is a task as onerous as, well, a surprise Chicago handshake.

In this milieu, celebrating Malört makes a statement — one that’s as uncomfortable as suffering for fashion, yet funnier. The exact statement depends on who you ask, much like the Rorschach test that is Malört’s flavor. In Louisville, the epicenter of some of the fastest-growing and most-renowned liquors in the world, Malört provides a fraternity for those interested in publicly rejecting fine spirits culture for, well, something completely different. For me, I’m just glad this putrid garbage is available at my favorite watering holes so I can fuck with my friends.