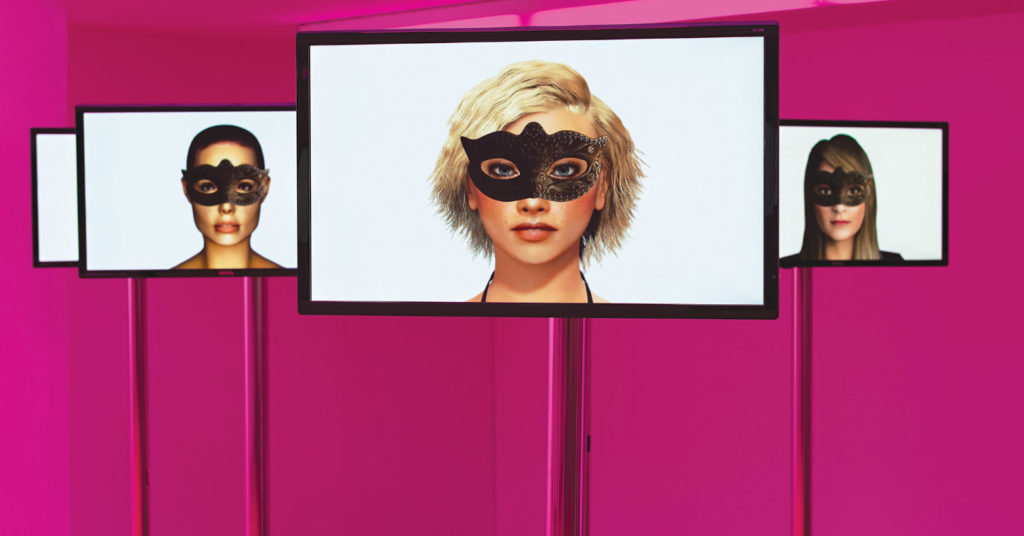 “Conspiratorial Aesthetics” at the Cressman Center for Visual Arts is an impressive grouping of internationally recognized artists and artist cooperatives whose works offer a variety of perspectives about the concept of conspiracy. These pieces, ranging from video installations to printmaking, reveal that conspiracy has many facets.

Master printer Cara Benedetto’s series of lithographs and the accompanying installation piece “Stone Broke” ask an esoteric question about conspiracy. The use of the image of a practice target suggests victimization. While these works directly address the violence in today’s society, the words used on the pieces allude to the loss and despair that accompanies victimization. Phrases such as “the world is built for our defeat,” in this case written lightly in the lower quarter of the target image, harken to the questions “do I have a target on my back?” and “what have I done to deserve this?” “Stone Broke” is a broken print stone with the image of a target inscribed upon it. Print stones are a valuable and precious tool, and the broken stone can be interpreted as a symbol of the effects of conspiracy, in which the erosion of the tool after multiple uses parallels the erosion of the human spirit after countless defeats.

!Mediengruppe Bitnik is an artist cooperative whose medium is, in essence, the internet. Its installation piece “Ashley Madison Angels at Work in Louisville” references the scandal surrounding the online dating service Ashley Madison, which appealed to people seeking extramarital affairs. Thousands of female chat bots were generated by the site to meet the male subscriber base, resulting in millions of men paying to have a liaison with a virtual entity. The piece is composed of five disembodied, computer-generated female faces, which are masked. An ambient pink light surrounds the screen images, which are mounted at eye level on stands. Automated female voices ask questions such as “are you online?” and “are you still there?” The recorded loops blend to create a strange, detached echo of alluring invitations, which are invasive. This auditory aspect creates a subtle tension and paranoia that would accompany entrapment and the sense of being conspired against.

Two of Walid Raad’s The Atlas Group Archive pieces are also videos, and the third is an inkjet print. One video depicts the experiences of a hostage, the other a seaside sunset recorded from a boardwalk. The print portrays pages from a notebook that catalogue the cars as bombs. These three works are concerned with the history of Lebanon, notably the wars of 1975 to 1990. They also share the blurred representation of truth. While all are compelling in their narrative, it is unclear what aspects of the story are fact-based and what is artistic license. The lack of transparency is the essence of conspiracy.

Deb Sokolow also tampers with the line between fact and fiction in her drawings. She offers schematics of events that could be fictitious, or not. The text of the mixed media piece “The Ban on Rocks inside the Kremlin” tells of an attempt by UK intelligence to eavesdrop on the Kremlin via audio equipment hidden in fake rocks and then speculates about the results. Drafting techniques are used to show perspectives like the interior of a rock and Vladimir Putin’s cigar library. The stark, linear images and the block lettering suggest an official document or blueprint while the fact-based subject matter seems comical, pairing the fantastic with fact and pointing toward the absurdity of conspiracy.

The transformative power of words is explored in the Raqs Media Collective’s “Corrections to the First Draft of History.” Short directives are written in chalky white cursive script upon black chalkboard paint, which covers the dense text of assorted newspapers. The array of lessons are grouped together creating a patchwork of condensed information. The blacking out of the newsprint and the overwriting allude to the fluid nature of reality, perception and conspiracy.

Every piece in this exhibit utilizes visual and linguistic elements. While the images are considered visually, their meanings and intentions are guided by the artists’ very words. The auditory elements of the video pieces create an additional sensory aspect, contributing further to the information provided. This compelling exhibit challenges the observer to look beyond conventional perceptions and consider the subtle aspects of conspiracy. •