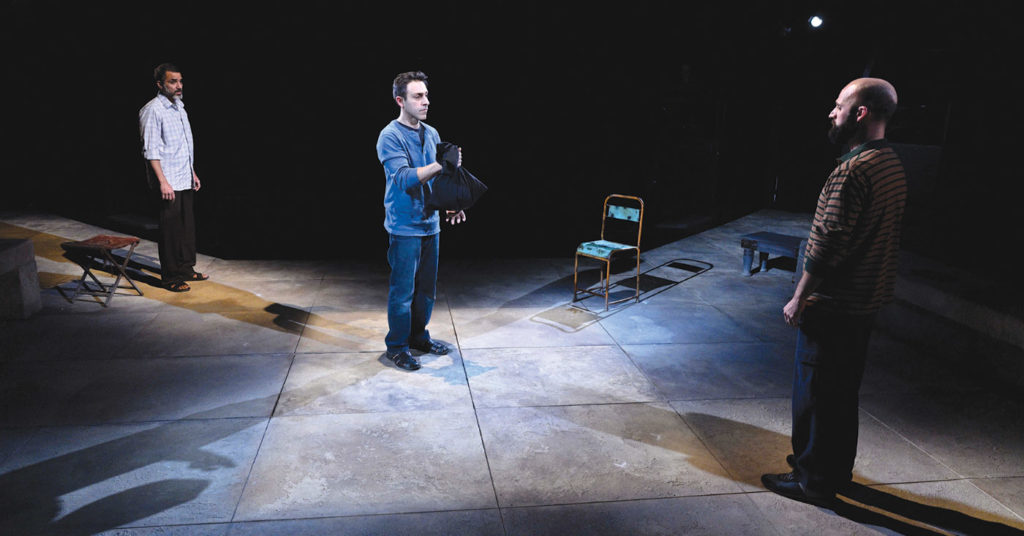 “The Corpse Washer” is a new play, but it actually started out as a novel released in 2013, about a young man whose family wants him to follow in his father’s footsteps of washing the bodies of the deceased — according to Muslim tradition — while he dreams of becoming an artist. The stage adaptation for the Humana Festival of New American Plays’ 43rd season was, in fact, commissioned by Actors Theatre, thanks to underwriting from the Les Waters New Works Fund.

Now, it makes its debut as adapted by Ismail Khalidi and Naomi Wallace. It’s a deep character study and touching coming of age story, as well as a brutal look at American foreign policy that challenges audiences to see the real destruction we’ve caused.

The main character, Jawad Kazim (Arash Mokhtar), is so earnest that, even in his selfishness at times, it’s difficult not to root for him. As a young boy, he trains to follow in his father’s footsteps before he’s introduced to art and throws himself into it wholeheartedly. He falls in love with the beautiful actress and schoolmate, Reem (Mehry Eslaminia). As he loses family and friends to the many wars (or same war, as some characters hold) that envelop Baghdad from 1982-2010, his earnest anger at the American invaders, his desire to leave for Europe and finally his earnest commitment to the respect for the dead are just as keenly felt.

It’s not an exaggeration to say that Mokhtar carries the show. At no point in the 100-minute run does Jawad ever leave the stage. He covers 28 years and a range of nearly every emotion with energy and deep resonance. Sometimes he might step back to let a conversation carry on between other characters, but he’s always watching, and the lighting (designed by Heather Gilbert) frames the scene in such a way that the audience knows they’re watching this scene from Jawad’s perspective.

However, this show also excels at side characters. From his loving but traditional father to his light-hearted brother, his strong-willed mother, radical uncle, quick-witted love interest and his brash friend, no one feels like a cardboard cutout. Although their stories orbit his, they all have their own conflicts and personalities. Even when they surround Jawad as ghosts, following him around the wash house and in his attempts to run away from it, they retain distinct characterization and individuality. At one point, even in Jawad’s imagining of her, Reem stops to reprimand him, reminding him that she’s a real person with her own life that doesn’t revolve around him.

The other actors, too, while they might not be as omnipresent as Jawad, do impressive work, often with varied characters. Johann George’s second act character, Mahdi, might have similar mannerisms to his kin and first act character, Hammoudy, but even he confidently reminds the audience that they are very different people. J. Paul Nicholas’s characters, Jawad’s father and Uncle Sabri, seem to be almost exact opposites, despite being brothers.

“The Corpse Washer” is at times poetic, with themes and strands of dialogue recurring where you’d least expect them. At times, it’s funny, with familiar banter and lovable bops in the background. At other points, it’s haunting and causes a clench in your stomach. But if this show is meant to represent new plays of the year, 2019 looks to be a good year for theater. •

Louisville’s ambitious Off-Main theater companies don’t flinch during the Humana Festival. Rather, they tend to step up with bold, provocative counter-programming. The Bard Theatre production of Adam Rapp’s “Red Light Winter,” directed by Jordan Price, is a case in point.

Rapp, likewise, is not much given to flinching. There is hardly a dark facet of modern life that he hasn’t explored, sometimes on the Humana stage, including notable premieres of “Finer Noble Gases” (2002) and “The Edge of Our Bodies” (2011).

“Red Light Winter” (a Pulitzer finalist in 2006) is as bleak a romantic tragedy as one could conjure. It opens in Amsterdam, where Matt (Neil Brewer), a sex-starved, struggling writer afflicted by a graphic giardia infection, is in the midst of botching his suicide attempt, when his obnoxious buddy, successful book editor Davis (Michael Mayes), arrives at his door bearing a gift: a sex worker named Christina (Leila Toba).

Literary banter and a triangular relationship — two parts obsession, one part cruelty — drive the story as the locale moves from Amsterdam to New York. What may have seemed especially shocking when the play premiered at Chicago’s Steppenwolf Theatre, now feels like well-reported, behind-the-scenes journalism.

If you’re looking for redemption or catharsis, you won’t find any — except in the three, powerful, unflinching performances. •