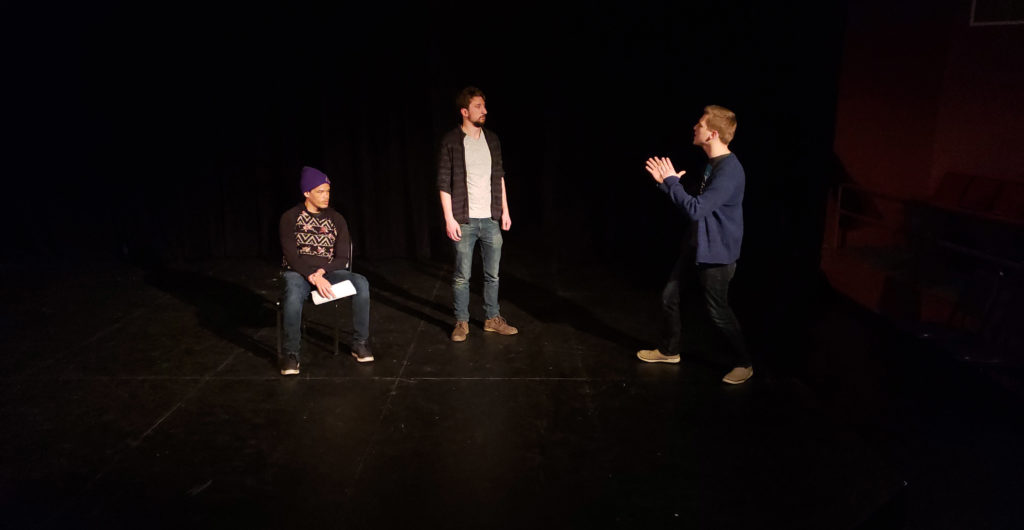 Zach Paul as Alan, Wes Yunker as Jim, and Logan Dodson as Ben-David.

Art, especially theater, has never been simply about the ability to entertain. Certainly, there are theater productions built for escapism, allowing audiences to leave behind the things that make them worry in their real life, and there’s value in that. But the most powerful pieces, the ones that stay with us for the longest, are productions that reflect and, better yet, challenge the world we live in. Theater can be a powerful vehicle for societal change, exploring major, polarizing issues from the lens of human characters — and inspiring change in the minds of the audience. Take, for example, Looking For Lilith’s and Teatro Tercera Llamada’s recent production of “Just Like Us,” which tackles the issue of immigration from the perspective of four Mexican American girls. Now, UofL’s Studio Theatre Company takes on issues of gun control, school shootings and toxic masculinity in its new production of Sam Graber’s “Shooter.” This production comes just a little more than a year after the shooting at Marshall County High School, and the conversation about gun control in Kentucky is as heated as ever. “Shooter” is still a relatively new show. The Studio Theatre Company production will be the first production since the original cast, which debuted off-Broadway and then toured the country and Europe. Bailey Story, a senior at UofL, is also making his directorial debut with “Shooter.” It’s a weighty venture, but when he saw the original production in New York City, he knew this was a venture worth taking and the kind of theater he wanted to explore. I spoke with Story about the upcoming production, what inspired him to choose this particular show, and how he feels about his first show as a director.

LEO: You saw the show in New York last year when it first debuted. What drew you to this show?
Bailey Story: I was in New York with the Singing Cardsmen last spring and wanted to see an Off-Broadway show and stumbled upon TheatreLab’s production of ‘Shooter.’ This was just a couple of months after the shooting at my former high school [the Marshall County High School shooting].

Did you start to have ideas then about wanting to direct it? Or, is it something that made an impression initially but had to ruminate for a while before you realized it was something you wanted to do?
I remember immediately looking for a script online on my walk back to my hotel. I found the script on Sam Graber’s [The playwright’s] website and pitched ‘Shooter’ to UofL’s Studio Theatre Company with me directing, which is something I have never done before until now. So, this project has been very ambitious and exciting.

Obviously, this production is coming at a very topical time, with news of so many school shootings in the past couple years, and even one as close as Marshall County last year. What’s something you want people to take away from your production?
Mainly, I want audiences to take away a new perspective on how our culture breeds school shooters. All of the characters in the play are male and this play — while on the whole, it is about a school shooting — also explores the toxic side of male masculinity that underscores the entire show.

This is the first production of ‘Shooter’ outside of the original cast. Do you feel any sort of pressure about that, or is it more just excitement to share the story?
It’s a little scary. I feel like I have big shoes to fill if I compare this production with the one I saw in New York. I think the great thing about theater is that there are so many ways of telling a story, and there isn’t a single right way to do that. I am confident in my actors, designers and crew that we will be able to tell this story honestly, in a way that is unique but just as impactful as the original.

What are you most excited about when it comes to this production?
This piece of theatre is incredibly relevant to the current state of affairs in our nation in regards to guns and mass shootings. I am interested in the reception of this piece in Kentucky, a state that puts such emphasis on gun culture.

“Shooter” opens on March 28th at the UofL Studio Theatre Company and runs through March 30th. Tickets are $5 and only available at the door 30 minutes before each production. For more info, click here.