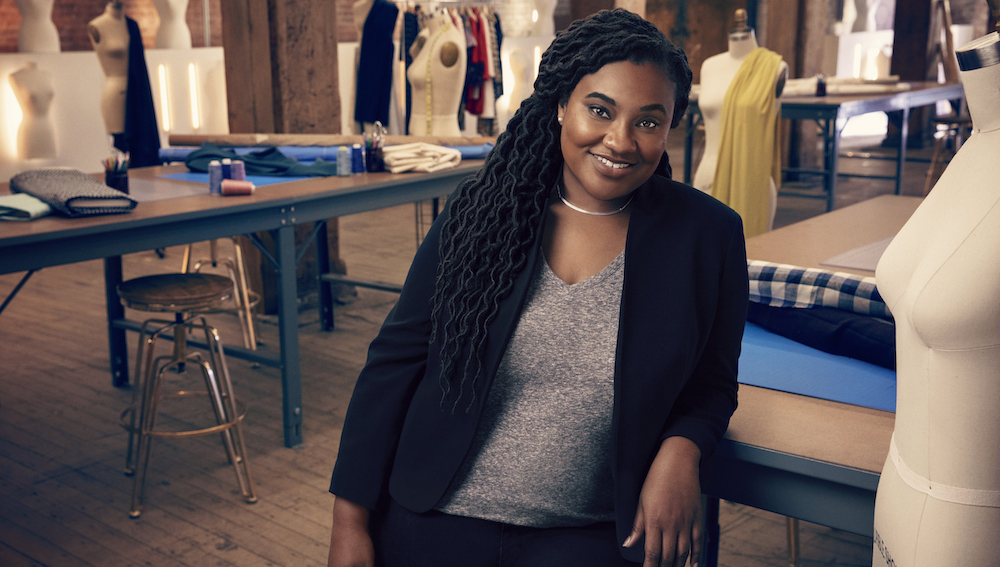 In the world of theater, we tend to talk about the actors, directors and maybe even the playwrights and choreographers. But there are dozens of parts being played offstage that go into making a theater production. As a theater major, Frankie Lewis designed costumes for productions put on by the UofL, where she graduated in 2010. Now, she’s taken a different stage as a contestant on the hit Bravo show, “Project Runway.” I talked to Lewis recently about her experience both as a theatrical costume designer and how that prepared her for her career as a fashion designer, and current “Project Runway” contestant.

LEO: One thing that caught my attention was reading that you’re a self-taught designer.
Frankie Lewis: It’s a mix of self-teaching and a mix of UofL. I learned to sew at UofL, but because it wasn’t a full-fledged design program, I could only learn so much while I was there. After that, I developed my skills on my own through YouTube videos, through looking at clothes and figuring it out.

You have a theater degree from UofL, and your first foray into design was through designing costumes for theater productions. Was it a love of theater that came first or a love of fashion?
It started out with a love of theater first. I’m a Youth Performing Arts School alum, and I was a theater student there. I was actually studying to do acting at UofL, and UofL’s theater program had an awesome scholarship opportunity for people who wanted to work backstage. It was open for students who didn’t know what they were doing yet — a learning program in addition to a work program. So I got the scholarship, and I was able to learn how to sew while working backstage on all the costumes and organizing all the costumes, and then I designed costumes as well. When I sewed my first thing, a chef’s hat or something for one of the plays we were doing, I thought, ‘This is amazing. I wanna learn more.’ I was able to convince my professor to start an independent study, because we didn’t have a fashion program at all. I didn’t think she’d say yes to just teaching me, but she took the time out to teach me and one other student how to make our designs come to life. So we weren’t just working on stuff we were doing for our shows: We were developing our own interests and techniques.

Did you do costumes for any local theater productions after college?
Yes. I did costume design for Bunbury Theater for ‘Lady Day at Emerson’s Bar and Grill.’ I’ve done costume design for one of the standard plays at Trinity High School. I’ve worked on the crew for the ballet. I didn’t design that show, but I was the draper for that show.

From designing theater costumes to opening your own fashion lines, what did you find was the biggest difference?
At first, I thought there was a huge difference. I thought, ‘In fashion design, I get to design what I want. I don’t have to worry about what a director thinks about my design.’ But at the end of the day, your client is your director. They’re coming to you, telling you what they want this moment in time to look like for them, and you offer your input and design, and you work together on it. So, as I’ve been doing both, I’ve noticed more similarities than differences. At the end of the day, costume designers are just fashion designers retro. They’re designing fashion for the ‘20s for a period piece, but all of those costumes were high fashion at the time.

In both of your fashion lines, Ann De Evelyn and now Frankie Lew, you make a point of being inclusive of plus-size fashion, which I really appreciate. What makes that important to you?
It’s important to me in that there shouldn’t be a difference. The training I got to learn how to draft patterns were taken from measurements, so when clients come to me, or even actors when we’re making clothes for them, we have their measurements, no matter what size they are. It allows me to approach clients as people, not as a plus-size client or a straight-size client. I’ve gotten to help a lot of my plus-size clients wear what they want to wear and not be apologetic about whatever that is. I want you to love the body that you have, not the body that you think this dress will give you. So, it’s been great to be a kind of accidental crusader of that mission, because it was never my intention, but I don’t mind doing it. If there’s a need for that, I’m happy to dress whatever woman comes my way.

Talk to me about your upcoming line, Frankie Lew. How does it differ from your former line and what makes you excited about it?
Something I’ve been learning over the years is that I’ve never liked rules, and I never liked standards. I want to do things my way. I just decided with Frankie Lew that I would step from behind the facade and be my absolute self and make whatever I want to make for whoever wants to wear it. I don’t care about cohesion. I don’t care about wearability. I care about making you smile and getting you excited about wearable art and, in the end, raising money for charity as my annual fashion shows do.

So, finally, you came to be a contestant on ‘Project Runway.’ What was that experience like?
It’s an experience that keeps on giving because of the friends that I made and can still visit and talk to. That in itself has been an amazing experience, just being able to pick up the phone and show someone what I’m making, and they understand. It’s also cool to get a little exposure, because I get to have a mini-platform, as long as it lasts. There are some things that are important to me, and I believe in that I get to talk about to a new audience. And it helps people at home who didn’t know that I existed, now they do and that incredible things can happen with perseverance.

For longtime fans of ‘Project Runway,’ do you think there’s anything new that they can expect this season?
I’ve been watching it for years, but I think this is the most diverse cast that I’ve ever seen. That diversity bleeds through in the designs. I think it’s going to be really cool for the audience to see different points of view that are out there right now. And new people just bring a new dynamic, so every season is different. I think they’re really going to enjoy falling in love with the designers this season.