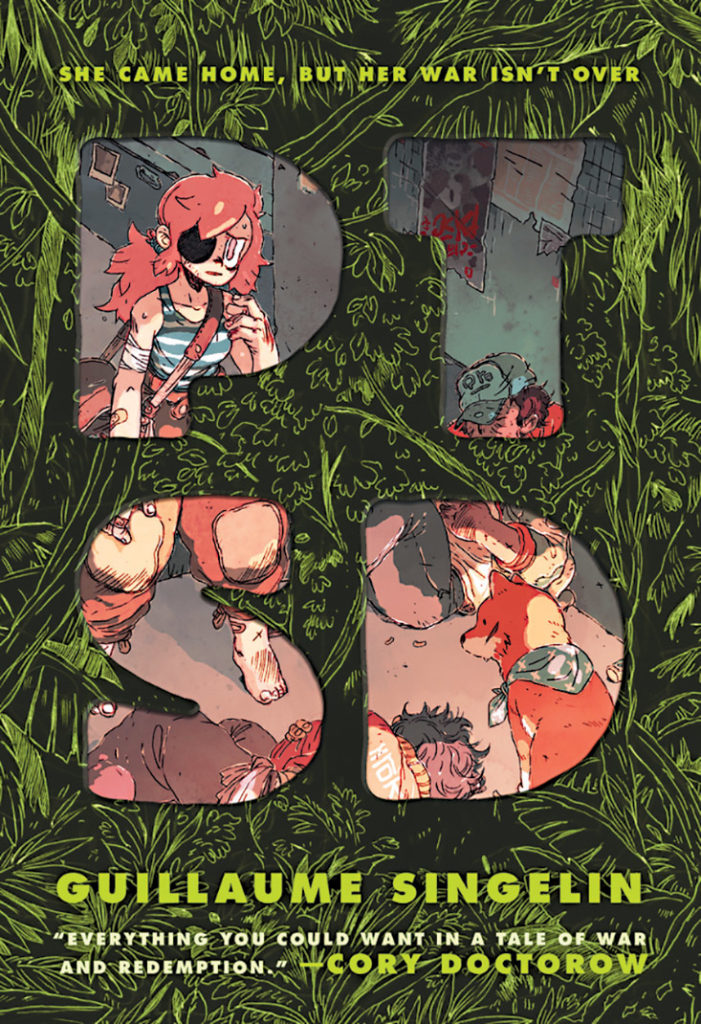 Guillaume Singelin’s “PTSD” is the story of a girl having returned from a vicious war to an unsupportive home. She must work through the trauma that she endured and continues to live with. Written within the world of a speculative near-future Earth, “PTSD” addresses real-world problems such as addiction, the atrocities of war and the lack of welfare for veterans.

Jun finds herself all alone and face to face with her pain while sleeping on the streets of a bustling city, surrounded by unfriendly and unforgiving faces. When an unlikely ally comes to her aid, she hides behind her pride and refuses her charity — only to find herself in even deeper despair. Her unresolved trauma pulls others into its grip, anguish radiating from the source and impacting the lives of both friends and foes. She must learn to not only accept the support systems offered to her, but also the good within herself. Perhaps with time she can even spread the joy of charity to others.

“I thought I could just go back to my normal life. But there was no one waiting for me when I came back home.” With these words Jun confesses where her anxiety lies, and they are the words that summarize the struggles of veterans all over the world.

The cover of “Naomi” No. 2 says “the biggest new mystery in the DC Universe begins here!” And it isn’t wrong. This is one of the first books on DC’s new Wonder Comics Imprint. These are books about and aimed at young adult/teen readers. It’s written by David F. Walker and Brian Michael Bendis who with artist Sara Pichelli created Miles Morales, a very big deal in the world of comics!

Naomi is a young woman living in a nice place where nothing interesting ever happens. Until, one day when Superman comes to town for a throwdown with a villain and then flies away leaving the population in a tizzy and a flood of social media postings. Poor Naomi, though, was working and missed it all. But something is triggered in her, and she finds herself questioning her life and the ties she feels to the world of superheroes. As she goes on a quest for answers, she finds out from an unlikely source that the last time Superman came to their town was the day she was adopted!

In the second issue, Naomi keeps chipping away at the mystery, looking for support from her family and friends that isn’t really forthcoming. Do they not understand, or are they hiding something?

I’m not a teen or even young adult reader, but this book has me hooked already! The writing is stellar, of course, and the art by Jamal Campbell is gorgeous! Don’t miss this one!