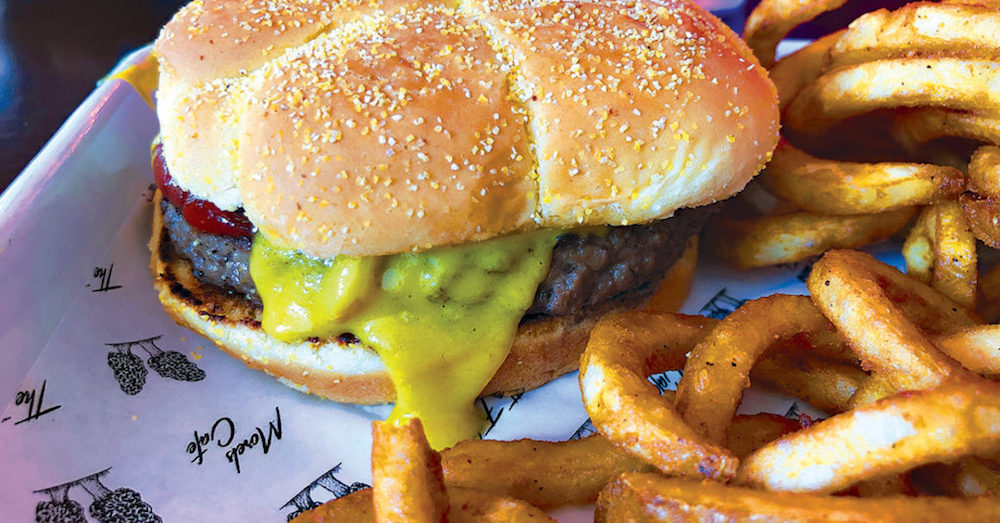 The Impossible Burger gets even more impossible, and Morels has it.

Even if you’re not a vegetarian or vegan, the folks who make the Impossible Burger want to get their meat-free, gluten-free, hormone-free and ridiculously delicious burger into your mouth. No, they’re not pushy vegan evangelizers. They just want to save the Earth by replacing resource-gobbling beef with eco-friendly plants.

This will work, though, only if the meatless burger tastes as good as meat, and, let me tell you, Impossible Burger 2.0 scores. It’s juicy, it’s meaty, it’s textured, and it even bleeds, thanks to a wacky ingredient called heme that’s the plant-based first cousin to hemoglobin.

It looks, smells and tastes so much like meat that some of his vegan customers are disgusted at the very idea, according to Morels Cafe proprietor Stanley Chase. But plenty more vegans and carnivores, too, are knocking Morels’ door down to get a taste.

We tried it on Morels’ bacon-cheddar-mushroom burger (a $2 extra charge to substitute the Impossible 2.0 for the usual $12 Beyond Burger) with a side of curly fries, and it scored on every point: Looks, smell and taste. We also tried a Beyond Burger, another manufacturer’s entry in the Really Close To Beef competition. This one came on Morels’ Diner Burger with cheese ($11) with a side of broccoli salad. Both burgers were good. If you weren’t paying attention, you probably wouldn’t notice that the Beyond Burger isn’t real meat. I’d just about bet that the Impossible would fool you. Yes, it’s that good.

Noise level: Every table was filled during our midday visit, generating a happy buzz, but we had no difficulty hearing each other. (Average sound level was around 75dB, the sound inside a moving car.)

Accessibility: Three steps and a heavy door bar access through the front entrance.