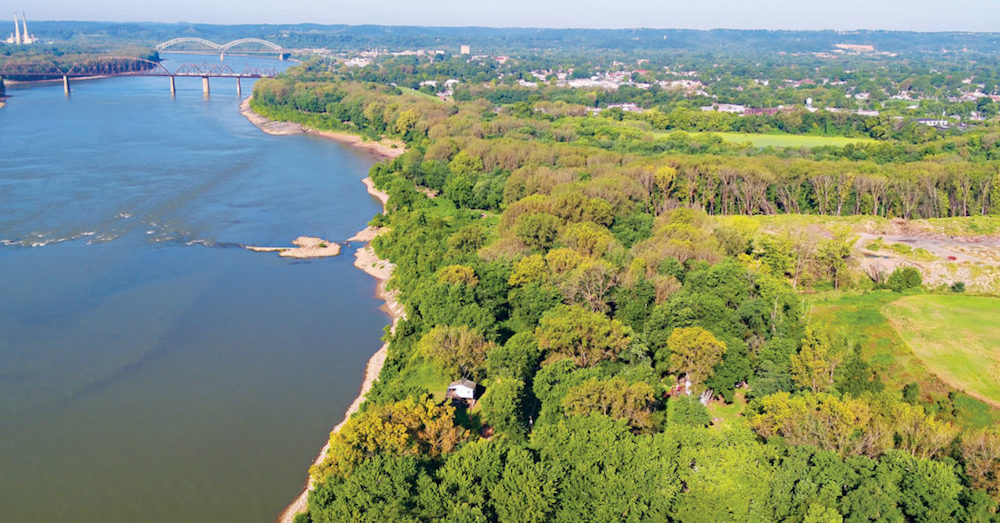 Aerial view of woodlands and wetlands that will be part of a new 400-acre park in Southern Indiana. Photo by Troy McCormick.

Scott Martin imagines protected marshlands and wildlife habitats. He imagines streams and rapids for canoeing and rafting and trails for hiking.

And he imagines it all in Southern Indiana: A 400-acre park across from Louisville, along a relatively undeveloped swath of land starting in Clarksville and ending in New Albany. A park that embraces the land’s tendency to flood — perhaps with a boardwalk that elevates park-goers above the floodplains.

“There are thousands of parks that start off with, ‘I have a great idea for a park,’ and then it goes nowhere,” said Martin, who, before planning the Southern Indiana park, was the director of the Parklands of Floyds Fork, itself a sprawling oasis of green built from an idea. “It sits on the shelf and collects dust.”

River Heritage Conservancy, an offshoot of the charitable Ogle Foundation, has already spent $1 million from private donations to buy 240 acres for the park. Purchasing the rest could take years, but it’s a start. The nonprofit is working to determine how to pay for the rest of the project through a public-private partnership.

Meanwhile, Philadelphia-based architecture firm OLIN is drawing up plans based on a rough vision for the park: An “iconic” getaway, a miniature version of the Parklands, which includes four parks spread across 3,800 acres — a wildnerness in the suburbs.

The Southern Indiana park, which does not yet have a name, would be a crown jewel intertwined with the Ohio River Greenway, which is a seven-mile path for cyclists and walkers that extends from Jeffersonville to New Albany. The eventual goal is to “wrap the river” on the Indiana and Kentucky sides with green space, said Martin. The park might connect to Louisville with its own pedestrian bridge, perhaps the K&I Bridge or Sherman Minton Bridge, both in New Albany. But it certainly would tie in through the Greenway to the Big Four Bridge, which leads to the Louisville Loop, a planned pedestrian path of 100 miles surrounding Metro Louisville.

And it would become a component of the Metro area’s growing collection of green spaces, including the Parklands and Waterfront Botanical Gardens off River Road and Story Avenue, which is opening its first phase this year. Not only would it add an enormous piece to the region’s parks, but River Heritage’s plan would transform an area of land that’s been ignored for decades. “This last piece is kind of the missing piece in the puzzle,” said Bob Hill, a Utica, Indiana resident of four decades, nature advocate and former columnist for the Courier Journal.

If you drive along the Indiana riverfront, starting at the Big Four Bridge, you begin with scenic views of the Ohio River. A little farther down the road, you’ll find sit-down restaurants with skyline views. And if you keep on driving, you’ll make it to Clarksville’s modest Ashland Park and The Widow’s Walk Ice Creamery. From there, it’s the famous Falls of the Ohio State Park, with its fossil beds and wooded trails.

But then… the road stops.

From the conservation area to the downtown New Albany amphitheater, Indiana’s riverfront is something of a mystery — even to longtime community members.

“It’s a very hurt, wounded, bruised landscape,” said Martin. “It’s been timbered, plowed, borrowed, filled, polluted … It feels like a forgotten landscape, because it was forgotten.”

Martin estimates that the 400-acre area is half industrial businesses and half natural space. Neither part is in good shape.

The wooded sections of the riverfront flood often, leaving piles of trash in their wake. Still, the area is a common getaway for fishing.

The Ohio River Greenway’s trail through the woodlands, another project that the Ogle Foundation is involved in, is now open. Farther northwest, untouched wetlands have been acquired by New Albany, but they’re accessible only from the Greenway.

In the industrial section are salvage yards with rows of rusting cars, an old quarry and stark landfills. Many of the businesses are still active. In the ‘90s, a fire burned thousands of tires in the area. The remnants are still embedded in the landscape. It’s a common fate for riverfronts, which were historically used as corridors of industry by their communities.

The 400-acre area in the conservancy’s purview has been industrialized for decades, said Martin. Over the years, though, commercial activity has waned in the corridor. The government responded by proposing new riverfront development. First was the Falls of the Ohio interpretive center in the 1990s. Then came the restaurants and the Big Four walking bridge.

In some ways, the neglect of the area has paved the way for a more thoughtful future.

“I don’t know many big cities that have a chance to do something this dramatic on this sort of wild space literally in our urban core,” said Martin. “When I look at our peers, Indy doesn’t have this chance. Nashville doesn’t have this. This is something unique to our region.”

Both he and Hill believe that a park is the best use for the remaining land. For a reason, Martin looks to Louisville.

Like Indiana, Louisville’s riverfront was once dominated by scrap and storage yards. Now, it’s home to the aptly-named Waterfront Park, which features rolling greens and riverside swings. “When you think about the successful reinvention of downtown Louisville, the credit goes to Waterfront Park,” Martin said.

The parks of Southern Indiana skew toward functional. There are plenty of baseball fields and golf courses, but barely any large-scale retreats for nature lovers. The ones that do exist lie outside of the riverside cities’ limits, such as Charlestown State Park or Mount St. Francis in the hills near Floyds Knobs.

Martin believes Southern Indiana communities used to think of themselves as small towns, leading to small development. Hill thinks municipal governments suffered from a “caretaker” mentality. “Basically, it was just a government that didn’t seem to care, or have any vision or really want to look ahead,” he said.

Today, with River Ridge Commerce Center, a large business park with plenty of unclaimed space, Southern Indiana is the Wild West for new business. And the area is focusing more on quality of life to attract workers. Jeffersonville Mayor Mike Moore is working on a park for this very purpose: A 115-acre natural haven near housing developments abutting River Ridge. “For the quality of life issue, to have a 115-acre park is an enormous selling point for us, which will help us to lure more people over to the city of Jeff,” said Moore.

The Ogle Foundation is, in turn, devoted to promoting economic progress in Southern Indiana. Martin said that the organization began planning the park to enhance the Ohio River Greenway project, another notable quality of life effort.

“They get it — that the best thing you can do for your community development going forward is build a city worth living in,” said Martin.

When Will It Be Done?

River Heritage Conservancy’s park is where Floyds Fork was in 2004, according to Martin. For reference, 2010 was when shovel made contact with ground for the project. The park was finished in 2016.

The land that the Conservancy still needs to acquire won’t be easy to obtain. The nonprofit might have to wait a few years to persuade the more stubborn property owners to sell.

The pedestrian bridge is another matter.

The two existing crossings that could work, the K&I and the Sherman Minton bridges, are owned by the railroad and government, respectively. Both would require negotiations with their current title holders.

All this means that Martin’s 400-acre dreamland is pretty far off from opening. But at least it’s not a fantasy. •