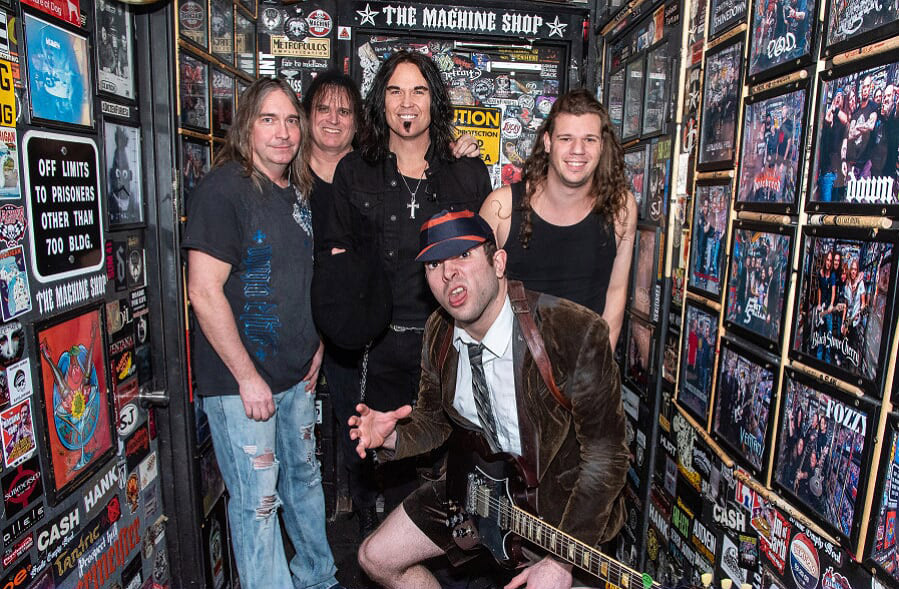 If Adam Levine and his shirtless theatrics don’t interest middle-aged audiences of modern day, a band like Thunderstruck, pulsating AC/DC’s “Hells Bells” at an audience to teeth-jarring levels, can conjure feelings of youthful indulgence — mortgage and overtime be damned — if only just for an evening.

And thus, tribute acts flock to Louisville venues, paying homage to artists from Pink Floyd to Fleetwood Mac. They’re everywhere, and people pour into local venues to see them.

The appeal might not be obvious. It’s easy to dismiss and say, “Just stay at home and listen to the record.” Heck, a few of these acts pay tribute to bands that still exist and tour. But particularly for shows like, say, Experience Hendrix, which will be staged at the Louisville Palace on March 19, it’s the closest most living people will ever get to seeing Jimi himself.

For venues, booking a tribute show is as much about keeping the space full of people as anything else, especially during slow periods when original bands aren’t touring as much in the Midwest, according to Joe Argabrite, a partner and talent buyer for Production Simple, which exclusively books Headliners, and also holds shows at Iroquois Amphitheater, Waterfront Park and others.

“Obviously, national acts are hesitant to travel in areas that could be heavily impacted by weather,” Argabrite said, which makes a tribute act financially appealing. Sell more tickets, make more money. And while some of the tribute bands that come to venues like Headliners or the Palace are regional touring acts, who perform relentlessly, some are locally-based, like Back 2 Mac (formerly Rumours), a Fleetwood Mac tribute ensemble comprised of Louisville-based artists. Argabrite says that the band draws well, noting that drawing 350 or more constitutes a successful show for a tribute act.

Matt Schwegman, a senior talent buyer for Live Nation, which books shows for Mercury Ballroom, said the venue will host two or three tribute shows per month in 2019, perhaps even more during the summer. He says the shows, for the most part, have been well received.

“We have seen a nice uptick in attendance so far this year,” Schwegman said. “End of the day, it’s a great way to keep our fans engaged, and the shows are always a fun party.”

Dan Forte is vice president of programming and events for The Kentucky Center, and he works with tribute acts and also works with Production Simple to promote shows at times. He said he tries to avoid the acts that pay tribute to bands that currently are active. In other words, don’t expect to see, for instance, a Billy Joel tribute at the Brown Theatre anytime soon.

“That doesn’t really make sense to me,” he said. “But it’s still big business.”

For the musicians, it’s about something else.

“Just like anybody in music,” Argabrite said, “everybody’s got music that connected with them early on and inspired them. I find a lot of these tribute acts are put together by individuals who basically just want to give a voice to their inspirations.”

Allen Needham, who plays in a Pink Floyd tribute called Dark Side of the Wall, described it like this: “It’s like you’ve invited a bunch of people who love the music as much as you do to share in the evening. We love that part of it so much.”

And, because of that love, they not only know the songs inside and out, they replicate the sounds with original instruments as meticulously as possible.

“We love it every bit as much as anybody who comes to the show,” said Dave Moody, frontman for Thunderstruck. “The only difference is about 10 feet. If they were doing it, we’d be down there watching them.”

In the end, it’s about how well the audience is engaged. It’s one thing to go to a bar on a Friday night and listen to a cover band churn out three hours’ worth of tunes from the ’60s through the ’90s, but it’s quite another to take in a Thunderstruck show, which brings theatrics, Marshall stacks, smoke machines and costumes that help transport the audience to 1981. People engage with that image, that energy. And it in turn engages the musicians.

Moody refers to Thunderstruck shows as “family reunions,” saying that he sees long-time AC/DC fans who bring their children and even older relatives to share in the experience. Moody, who was a long-time member of local cover band Jefferson Tarc Bus and also toured as Billy Ray Cyrus’ bassist, views the shows essentially as a trip back in time.

“We understand we’re not AC/DC; we are the spirit of AC/DC,” he said. “You can still see us and live in the spirit world with us for little while. We try to replicate what you can’t see anymore and grew up on.”

And the audiences keep coming, with Thunderstruck now looking at a packed, coast-to-coast tour schedule. Moody says the band played 75 shows last year, with a projected 90 to 95 shaping up for 2019. Venues, naturally, are embracing the wave.

“Quite frankly,” Argabrite says, “there’s a demographic that loves the music, and I think would rather sometimes pay a $15 ticket than a $60, $80, $100 ticket to see [the actual band] in an arena. And they’re an entirely different demographic that doesn’t consume as much current original modern music and they stick to what they always listened to.”

Economics plays a large role, to be sure. Mercury Ballroom has become such a haven for tribute acts that the venue’s website has a page dedicated to the schedule of upcoming tribute shows. These acts have seen the rise in interest and are now taking advantage of that market.

“I think the tribute acts have always been around, but more and more, some of these regional bands are getting out of their geographical pockets and hitting markets like Louisville more than they have in the past,” said Schwegman. As for the audiences, “It’s a cheaper alternative for some. It’s a great party in which the fan knows exactly what they are getting into.”

Needham recently launched a side project in the form of a U2 tribute show, which played its first gig opening for Thunderstruck. Even with a mismatched audience, he said, the crowd embraced the set. Of course, U2 is still an active band — the difference comes in price and availability.

Which begs the question, if AC/DC, Pink Floyd and U2 tribute acts are selling tickets today, does it mean in 25 years we’ll all be attending tributes to Lady Gaga and Taylor Swift?

“It seems strange to think about,” Argabrite said, “but I suppose we will.”