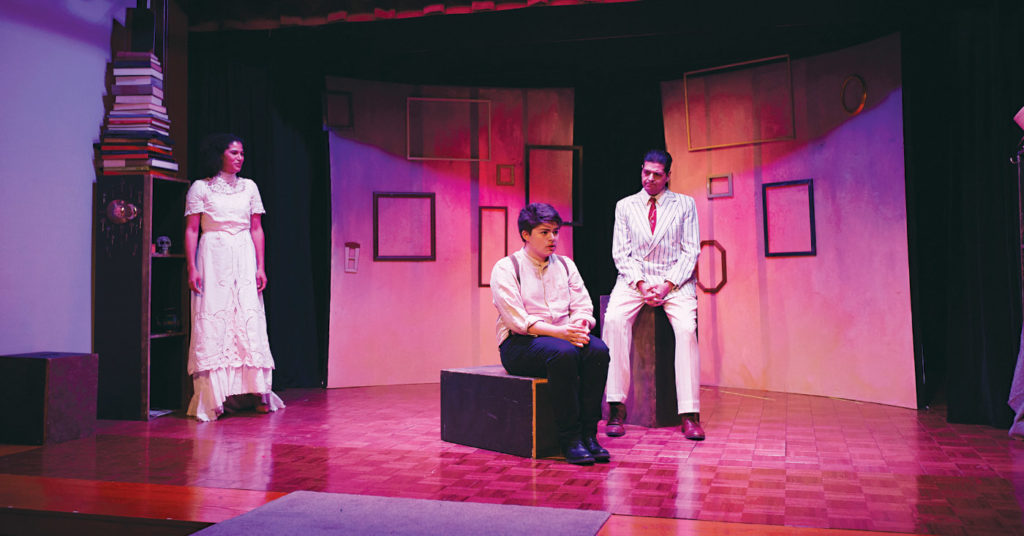 In more ways than one, Theatre [502]’s new play “Sergio’s Museum” is about coming home.

The main character, Sergio de la Plata (played by YPAS senior Mateo Sollano), has been kept away from his childhood home for seven years since the night his parents’ died. Now, at the age of 18, he’s finally able to return and inherit the home and his mother’s vast, eclectic art collection. On a meta level, the playwrights, Steve Moulds and Diana Grisanti, also understand the feeling of coming home. Grisanti is a native Louisvillian, and Moulds began his career in the Actors Theatre literary office. They’ve moved around the country writing plays that have garnered national attention, but eventually they settled back down in Louisville.

“Louisville is where I learned so much of what it means to be a working theater artist,” Moulds said. “But, I think of our relationship to this city like a boomerang — a project or a gig may take us somewhere else, but Louisville will always bring us back.”

Now, they’re playwrights in residence for Theatre [502]’s current season. Their new play is set not in present day Louisville but in 1917 Mexico, in the midst of the Mexican Revolution. The revolution is motivation for Sergio’s governess and fellow amateur detective, Ana (Jay Marie Padilla-Hayter), who is passionate about the cause, and it adds to the atmosphere of the play. However, the revolution isn’t a big plot point to the play. The central themes of “Sergio’s Museum” come down to family. Sergio lost his family abruptly and then lost his home or his connection to them. He unravels secrets about his family while helping Ana break back into the house to find an item in the museum that his family allegedly stole from her parents, de la Plata housekeeper Gabriela (Liz Torres) and butler Salomon (Guillermo Sollano).

Gabriela and Salomon were killed in the same car crash that killed Sergio’s parents, and, in many ways, the show centers around the family dynamic between Ana and Sergio. Ana, frustrated with Sergio’s privilege, tries to teach him to have a better understanding of the working class and the revolution. Sergio, at the age of 11, is restless and bored with discussions of politics. But for all the bickering, the two have moments of genuine tenderness that make up the sweeter parts of the show.

The show isn’t told in a linear fashion, but rather in patches of memory, which suits it. We first meet Sergio on his 18th birthday, inheriting his home, and then we flash back to the day that he lost everything. Dreams glide in between the memories, painted in deep purple or blue lighting as Sergio recalls the night his parents left or argues with the ghost of his mother Carmen (Gabriela Castillo) about conversations they may have had.

“I love ‘Sergio’s’ for a number of reasons,” says Grisanti, “but I especially love the way it moves … like a ghost — wandering from room to room and sneaking up on you when you least expect it.” And Sergio says as he and Ana return to the house, “There are ghosts in this house.”

Every element of the show adds to the effect, from the versatile set design to the lighting design (by freelancer Jesse AlFord) to much of the introspective dialogue from the script itself.

Another element to appreciate about this show is the commitment to a fully Latinx cast. It’s something that should go without saying when casting a show set in Mexico with all Latinx characters, but too often, theater productions will default to whitewashing or avoiding productions with a prominent cast of color altogether, complaining of a limited casting pool. “Sergio’s Museum” is proof that this excuse simply doesn’t cut it. In addition to the Sollanos, Castillo, Torres and Padilla-Hayter, the cast is rounded out by Theatre [502]’s co-artistic director, Gil Reyes, playing Sergio’s father Hector as well as the estate manager.

“Sergio’s Museum” is an intriguing mystery and a family drama, but one that seems deeply focused on the little, personal details, intimate and honest. And the family themes extend behind the scenes as well. Guillermo and Mateo Sollano are a real life father/son acting duo, a fact that makes the affectionate scenes between Salomon and the young Sergio richer upon reflection. The playwrights, too, are a married couple in real life and raising their 3-year-old son in Louisville. But the blend of the personal and professional doesn’t seem to hamper their work. If anything, it enhances it.

“People are always amazed that we work so well together,” Moulds said, “but we just really like hanging out with each other, so we’re fine with the life/art boundary being so permeable (nonexistent, really).”

“Not taking stuff too personally is definitely key,” Grisanti added, explaining they recently had an argument over something as seemingly small as a paperweight (which makes even more sense once you see the show). “We made up, though, and now we’re friends again.”