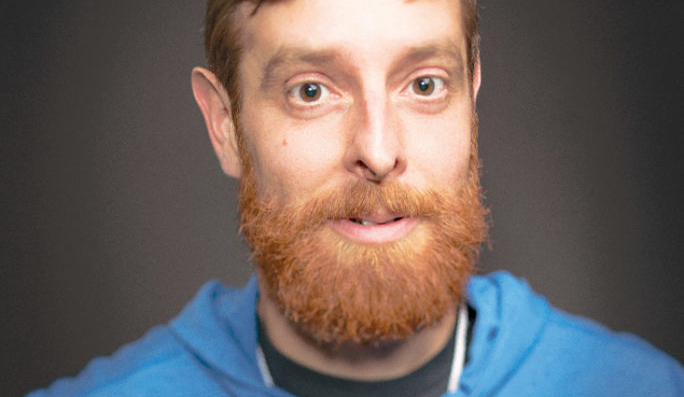 Comedian David Britton is into wizards. It turns out that others also are, as gauged by the popularity of his storiesaboutwizards.com. What would he do if he were a wizard? “I’d probably try to get rid of this athlete’s foot so I could concentrate a little bit,” he told LEO. Britton appears one night only, Tuesday, Feb. 19, at Kaiju.

LEO: There’s a real bookishness, or even nerdy quality, to your comedy.
David Britton: Yeah, I guess I’ll take that as complimentary. If people want to describe me as bookish and nerdy, I certainly wouldn’t stop them.

Is that how you were as a kid?
Yeah, I definitely read a lot, but that’s because my mom read a lot. She read me ‘The Hobbit’ when I was young, and that’s when I got into fantasy and sci-fi. I got into comic books when I was in junior high. I loved all of that stuff before it was popular, when being a nerd would get you punched in the face. Yeah, I would definitely say I was a nerdy kid, but I never had the upside of good grades, either. So, I’m not sure how that balances out. I loved reading, but I didn’t want to do work.

How is writing comedy articles different than writing for the stage?
One thing is that you don’t have any inflection. You can’t give the audience a wink, ya’ know? You lose your facial expressions and gestures. You have to make sure when you’re writing that the humor is in the words themselves. I also feel like satire is at its best when it’s subtle, however, you still have to get the point across clearly. Finding that balance can sometimes be tricky.

Your perspective on the Garden of Eden indicates you aren’t particularly religious.
I have a lot of friends of various religions, and they are some of the best people I know. I think a lot of times my default is to think that all religions are kind of silly. Whether it’s Christianity or Buddhism or whatever, my instinct is to think that it’s ridiculous. People can believe in what they want. For me, I believe it’s all kind of silly.

Is it rebellion against a religious childhood?
We went to a Lutheran church as a kid, but once my grandparents died, my parents kind of stopped making us go. After a while of asking for answers, and never getting any, I was like, ‘Cool, I just don’t believe this anymore.’ It’s like Santa Claus — until the age of 10, you’re supposed to believe in this magical, red elf who delivers your presents. Also, Jesus is God. Then, around the age of 10, they’re like, ‘The red elf is made up. We’ve been lying to you for a decade. But don’t worry: The Jesus thing is real.’ Obviously, any kid is going to be like, ‘But is he? You’ve been lying to me my whole life.’

What made you start a blog of stories specifically and exclusively about wizards?
I usually write onstage. I don’t often sit down with a notebook and write jokes. One night, I was like, ‘I’m going to sit down and write.’ And what came out, instead, were the first three stories about wizards. I tried doing it onstage, and it didn’t work. I kept them for a while, and one night I got a little drunk and just put them online. After that, I was like, ‘Well, I guess this is a thing.’ It’s not like I was really obsessively into wizards before that. I just kind of stumbled into it. I really enjoyed doing it, and now I really am kind of into wizards. I totally understand why J.K. Rowling wanted to write about them. Because when your characters have magical powers, you can do anything you want.

In your experience, are wizards funny?
Some of them are. All of the wizards in my stories have a really dark, morbid sense of humor. They think that death and destruction are hilarious.

If you were a wizard, what would you do?
I’d probably try to get rid of this athlete’s foot so I could concentrate a little bit. I know that’s like the equivalent of asking someone what they would do if they won the lottery; and they answer, ‘pay off my student loans.’ But this shit is really distracting. •