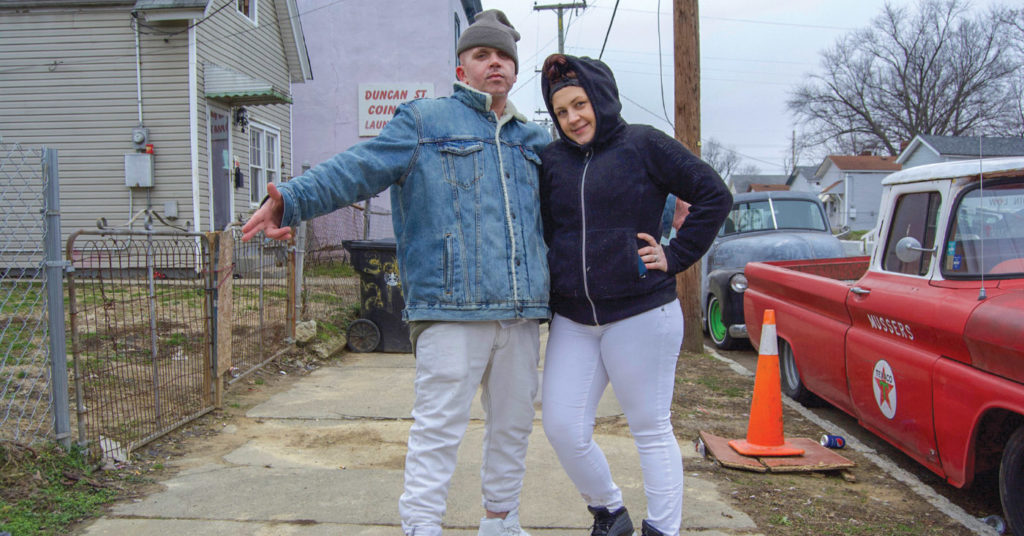 “We were born and raised down here. A similar pain brought us together, and we really got a hell of a friendship. Basically, being misunderstood, we understand each other. It’s not a relationship, but we’re starting with the foundation. Like iron sharpens irons, as too, a friend sharpens a friend. It’s pure respect and buildup. I’d be a sucka’ if I was trying to get with her, and she ain’t at her fullest, and I’m not at my fullest, ya dig? We’re just trying to build, and it’s a beautiful friendship.

We gotta body that can’t digest drugs and a mind that can’t digest life, so we’re thoroughly misunderstood because we self-medicate. Family looks at it like we’re doing drugs, and so we’re both outcasts. I feel like I’m supposed to be a blessing to my family and not a burden. The devil, like the lawyer he is, knows scripture and accuses us like a lawyer. So, like it’s a third-party voice, my dad’s wife, who is propaganda. However, propaganda is like hocus pocus, right? However, my self-medication makes my propaganda look true, ya dig? Those real close ties start to fade, and we seek comfort anyway we can, in each other. People don’t like drugs — it’s just a release. Alcohol isn’t nothing but a drink. It’s about thinking. Take the drugs and drink away, and we’re still broken. This shit goes back to my childhood. It’s deeply engraved.

With me, it started when my parents broke up. I came from a broken home. The devil divided it. I was 10 years old. I took my first drink at 10. I told my brother to give me a beer, and he said, ‘If you kill it, I won’t tell moms. If you don’t kill it, I’ll tell her.’ So, I killed it and boom, I had arrived. I felt like I needed to feel. I didn’t miss mom no more. I didn’t miss dad no more. I felt like a ladies’ man. I knew at 10 years old that I could change my reality with no harm meant. I always sought God, though. I knew that when people failed me, God didn’t. However, my flesh was never satisfied. I developed mentally and physically but didn’t develop emotionally. Emotionally, I’m like an adolescent. That’s not easy to admit, but you know. …

… I’m a single daddy. At the time, I had my 3-year-old, little boy and my 2-year-old, little girl, by myself. Their mama was gone on ice. My daddy’s wife called CPS and had my kids taken away. Now, I have nothing. I’m stripped. I’m bare. Human contact is critical. I had no one, and when you don’t have that, it fucks with your psyche. I went to do nine months of treatment. I was only supposed to do 30 days, but I did nine months. CPS was ready to close. My lawyer ready to close, and my baby mama never showed up to court. I didn’t take one drug test. I took a trillion. My baby mama’s public defender stood up and said that he don’t feel comfortable giving me the kids when she wasn’t present. She ain’t present? She’s never been present. I should’ve had my kids, that day, bruh! Mind you, I have a body that doesn’t properly digest drugs; I react abnormally. I have a mind that can’t digest life. So, when that happened, the best thing I could do was numb it. By numbing that pain, it made her look right. I’m misunderstood to the fullest. It’s a cruel and unusual punishment. I don’t want no pity or nothing — it’s just hard.

My outlook on life is that God is everything. God is gonna turn this around. The work he started in me, he’s going to finish in me. It don’t matter what it looks like. I was left in the street, in that park, when I was 10. I’m a product of this neighborhood. I’m just trying to work on myself, ya dig? All my faith comes from God. Any of my wisdom comes from pain and experience. If somebody gets something from it, I’m praising God. I’m only something when I allow him to work in me, and when I get out of the way.

There’s two roads in front of you: life and death. Choose life. Row, row, row your boat gently down the stream. Merrily, merrily, merrily, life is but a dream. Take it easy, man. Stay out of your own way and have some humility. Humility is not thinking less of yourself but thinking of yourself less. When you aren’t thinking about you, you’re helping someone else, and God’s working on you. See, I suffer from self and self can’t fix self. I’m real sick, and I need help. I’m just working on it.” •