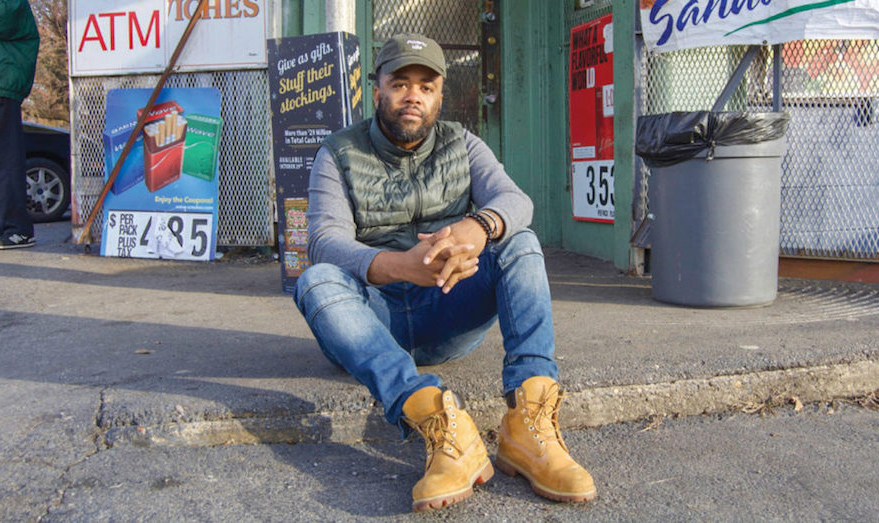 “I moved to Virginia Beach when I was 5. Then I was about 9 years old and all of a sudden, I had to move back to Louisville, when my mother got sentenced. My sister was in Virginia Beach, too, but she decided to stay with her boyfriend, so I had to come here and stay with my grandmother. I didn’t know anyone else, and I was brought to The West End. I just had to start making my way, but then I went back to Virginia, and we came back here when I was 13. It was like I was on my own because my grandma had five kids in her house to take care of. Even though we had discipline in our household, I still found myself in the streets.

When I was in 12th grade, there were times I would come out and would see my mother outside, stumbling down the street, from doing drugs. There were a few times when I would take her to rehab before school. I was so frustrated and depressed, and I started drinking during my senior year in high school. Seeing my mother like that, took a toll on me. I was drinking a lot at 18.

So I didn’t go right off to college and didn’t graduate high school. I did end up going back and got my high school diploma. As a kid, I was always very smart and made straight As. I have always been intelligent, but the trauma with my mother and not having a father had me depressed. I ended up going to some college, but I had a record. I quit college because I was like, ‘Why am I going to college? I can’t get a job. I’m gonna have to make my own way.’ From the age of 25, I decided to make it on my own.

My turning point came when I was living in Nashville. I bumped into a lady at the gas station, and she told that something brought her to me and she prayed for me. I never seen anything like that happen to anyone. We were at a gas station, and it made a difference. I moved back to Louisville and started to wake up and started reading a lot and opening my mind to different things. The shift started. I started learning about myself and loving myself. I was lost and hurt, and then it just started clicking. I was getting back to who I was before I moved back to Louisville, after losing my mother to the penitentiary. I was getting back to me.

My mother got clean and has remained clean since. Her strength to overcome her addiction really inspired and taught me so much about overcoming adversity. I would not be the man that I am today if it were not for her. She’s solid, and she never gave up on me. We will always have each other’s back, and for that I am grateful.

I owned two businesses, and it came to a point where I felt successful, but it was all about the money. It was a money chase. I thought money would change my life and help me, but I wanted purpose. I thought that the money would make me happy, but I needed to find my purpose in life. After losing a lot of friends to the penitentiary, death and bad health, I was seeing a lot of what could happen when living in a poor community. It’s a lot of violence and everything. It’s deadly and not livable. It’s not cool to feel comfortable in poverty, because it’s not really that comfortable. I realized that it’s a mentality that leads to the physical environment. Poverty kills; it’s not cool. No one should have to rest in poverty. You shouldn’t feel comfortable in a poverty state.

I decided to do something with that, and I was always into art, and my cousin was into designing clothes. We came together and created Poverty Kills, and we’re pushing this message. We’ve worked with different programs throughout the city, like Deeply Rooted. We made it so that a percentage of every purchase went to their program. We’ve also taken some clothes to the homeless and others in need. I even had the chance to go to Jamaica and speak to children at a school about entrepreneurship and poverty and building wealth from creativity.

I would love to wake up as many people as I can. I want them to realize that they can be more than their environment. You can change your mind, your environment, and you can overcome your circumstances, no matter where you’re at. I would like to wake up a lot of dudes that go through the streets and poverty and let them know that it was never them. Like, you was never a street dude, but it was just your environment and your mind. That was never you. I want people to be their higher self, while they’re here, instead of living a lower life. You have a chance to really be whatever, and your circumstances are mental and causing you to take to the streets.

Through your mind, anything is possible. At any time, you can change your life and accomplish anything with willpower, patience and staying focused. You can really direct yourself and create the life that you want. You don’t have to live it another way. You can really do it your way, and you don’t have to feel bad for being yourself. I dealt with tons of regrets from taking the wrong route. Knowing that I was intelligent, I could have been a doctor or a lawyer. I had tons of regrets from skipping college, but now, I’m at a place where I no longer have any regrets because I love who I am, and I’m happy with that.” •