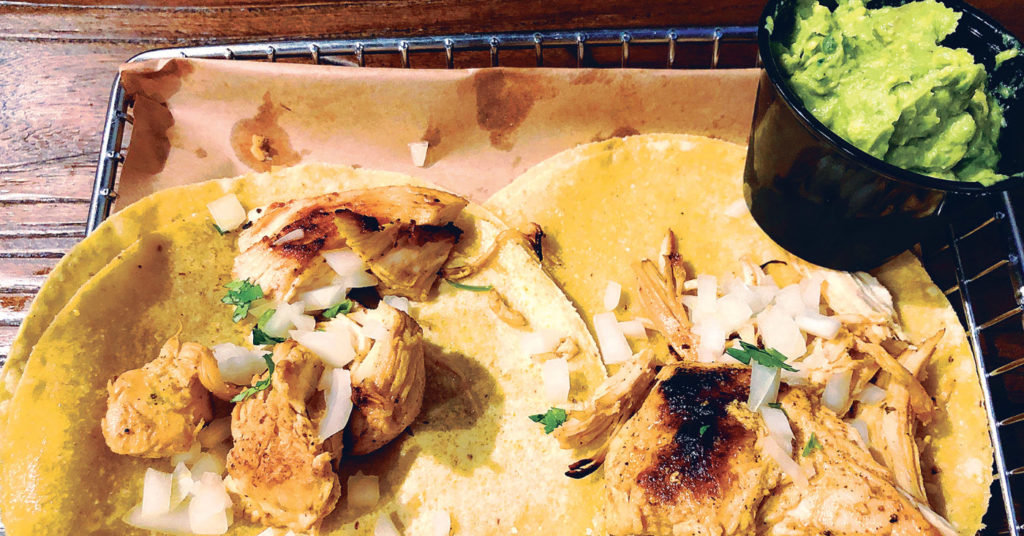 Sliced chicken adobo tacos at Down One Bourbon Bar.

Thoughts upon an evening of snacking and sipping rye whiskey in Down One Bourbon Bar: Bourbon has been around for well over 200 years, and its history has been tied to Kentucky for all of that time.

What’s more, bourbon is booming, with the state’s distillery roster quadrupling from 18 to 78 properties in the past 10 years.

So riddle me this: Why do you suppose that Louisville, stuck with a shabby downtown that closed up at night since white flight, expressways and suburban malls shelled it during the ‘60s, took until recently to figure out that bourbon makes a great fuel for tourism and urban development?

For two generations, no one could figure out how to turn downtown into a place that didn’t go dark at the end of the business day… until somebody thought about using bourbon to lure ‘em in.

Downtown is bright again, with happy crowds wandering from bars to restaurants to distilleries and a bourbon museum, this traffic in turn fueling restaurants, hotels and shops.

Why, some call us the Napa Valley of Bourbon, with 20 of the Urban Bourbon Trail’s 50 bourbon bars located downtown, many along Main Street, where the once dilapidated Whiskey Row’s classy 19th century buildings are starting to look sharp again.

Down One actually got into the game earlier than many of its siblings, opening six years ago this month in space that the Galt House operators, undoubtedly with a keen eye for the bourbon trend, carved out of one of its subterranean parking garages. Hence the Down One name, as one must descend a flight of metal stairs to get in from the street.

Roll-up doors give access to a magnolia-shaded front patio in warmer months; for the winter, it is incorporated into the interior with heavily insulated windows. High-top tables serve the bar at the right hand end of the room; closely spaced rough-grained wooden tables with heavy wood-and-metal chairs fill the space to the left. Another room offers casual seating on long sofas and overstuffed chairs around an oversize Persian carpet.

The food is casual but certainly not secondary. You could call it creative takes on bar fare, with smallish plates that almost all go for $10 or less. Sandwiches are built on oversize “four corner North Carolina style” biscuits or eggy, challah buns. There is a variety of burgers, a brace of tacos, a bunch of starters and a few salads. Finally, a well-stocked toppings bar stands ready for you to dress your dish.

Service was a little slow at first when the place was slammed and most of the crowd was in a hurry to make a show at the KFC Yum Center next door, but the pace picked up once the concertgoers left.

Our friend Avery, a New Yorker, had never heard of fried green tomatoes, so naturally we had to educate her with a $10 order. Five, thick-sliced rounds were breaded in peppery batter and crisply fried. They were served with tangy ranch dressing, diced cucumbers and sweet-hot red pepper jam.

Another appetizer, flat iron street corn ($5), was similar to Mexican elotes without the mayo. An ear of yellow corn was covered with a mix of grated Cotija cheese, Mexican Tajín Clásico chile-pepper seasoning and bourbon salt, with lime wedges alongside.

A couple of sliced chicken adobo tacos ($3.50 each) were served Mexican street style, open-face on doubled corn tortillas. Bite-sized chunks of gently spicy, aromatic adobo-style chicken were dressed with chopped, raw white onion and fresh cilantro. A small side of guacamole ($2) was chunky and flavorful.

A falafel burger ($9) featured a large, fried chickpea patty, crunchy outside, tender within, slathered with Greek yogurt and topped with peppery arugula, placed on a rather bland challah bun. A generous side of crisp and sizzling fries was $3.

A smothered brisket biscuit ($9) was big enough to make a meal in itself. Uniformly thin sliced strips of excellent brisket were folded over and piled high on a fine, square biscuit and then topped with a few pickle rounds, sliced red onion and blanketed with thick cheese sauce.

Down One is a good place for a thrifty dinner to go with your bourbon. Our tab for three, including the rye tasting trio, was $57.50, plus a $12 tip for our server, Beau. The share for two would have been about $40 plus tip.

Noise level: Sound varies significantly with the crowd. With every seat occupied an hour before a concert at the KFC Yum Center next door, conversation was all but impossible. After much of the crowd left, the din diminished to a reasonable buzz. (Average sound level ranged from 75dB, the sound inside a moving car, to 95dB, the roar of a revving motorcycle.)
Accessibility: Down One is down a flight of metal stairs from the street. However, wheelchair access is available from the rear, through the Galt House parking garage.